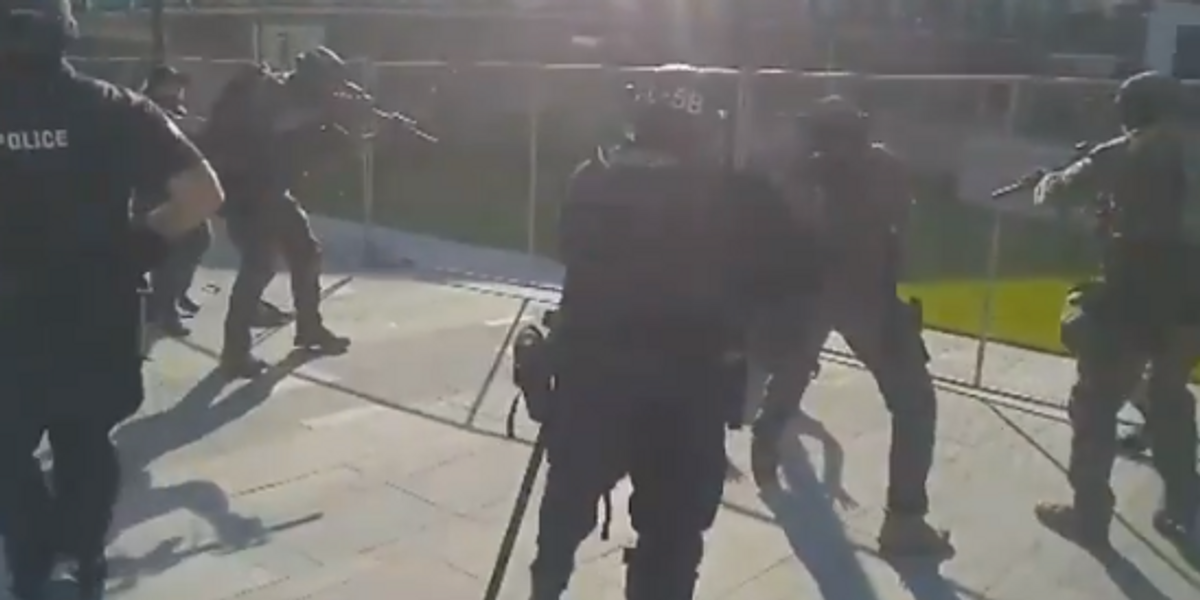 Two suspects were taken into custody by police on Saturday afternoon after a person was shot and killed in downtown Denver.

An event dubbed the “Patriot Muster” rally organized by John “Tig” Tiegen was held at 2 p.m. at Denver’s Civic Center Park. “It’s time we let these communist socialists know we have had enough,” a description of the event read. “Fight back, push back. Time to take our country back!”

Once the Denver Communists organization caught wind of the rally, they scheduled a counter-protest called the “BLM-Antifa Soup Drive.”

“We scheduled our action after learning that the militia-fascists had called a ‘patriot muster’ against the Black Lives Matter movement, anti-fascists and Marxists,” a spokesperson for Denver Communists said. “That’s us — guilty as charged and happy to oblige with our presence.”

“The plan is to set up our tables and tents in Civic Center Park, as near as we can be to the fascists,” Denver Communists said. “We’ll have soup for our family, music, speakers, communist books, and plenty of angry anti-fascist chants.”

KUSA reporter Marc Sallinger was covering the rally and the counter-protest.

A couple hundred feet away a group with an “Antifacist Action” flag as well as a “Denver Communists” flag is at a s… https://t.co/E1dVeVjYzF

A line of police officers kneel down to put on gas masks, perhaps foreshadowing what’s to come. The officers are li… https://t.co/JyIUDTrpo8

At 5:48 p.m. EST, Denver Police’s official Twitter account wrote: “Officers are investigating a shooting that occurred in the Courtyard by the Art Museum.” The police said the shooting victim was transported to the hospital.

The Denver Police shared updates that two suspects were in custody, and that the shooting was “now being investigated as a Homicide.”

“A man participating in what was billed as a ‘Patriot Rally’ that also included a presence of self-described BLM-Antifa protesters, sprayed mace at another man and that man shot him with a handgun,” The Denver Post reported.

Video from the area shows an orange cloud of smoke or vapor followed by the sound of a gunshot. Footage shows Denver Police rush to the scene with guns drawn, then order two men to the ground, including a man dressed in all black with a handgun. Meanwhile, the victim lay motionless on the ground.

Here’s the scene outside the Denver library as police investigate a shooting following the rally #9News https://t.co/F7S0RVMQCv

A man dressed in black appears to be walking away from the crime scene and yelling, “One less white f****** supremacist, right in the f****** dome!”

Earlier in the day, rival protesters got in each others face. There were also agitators dressed in all black burning a thin blue line flag in front of Denver Police.

At one point, men dressed in all black with umbrellas scream at police for speaking to an older woman. The woman instructs everyone to “relax.”

Antifa militants are now harassing police in Denver who are trying to control the situation where a man was just sh… https://t.co/eANyfNwY0a