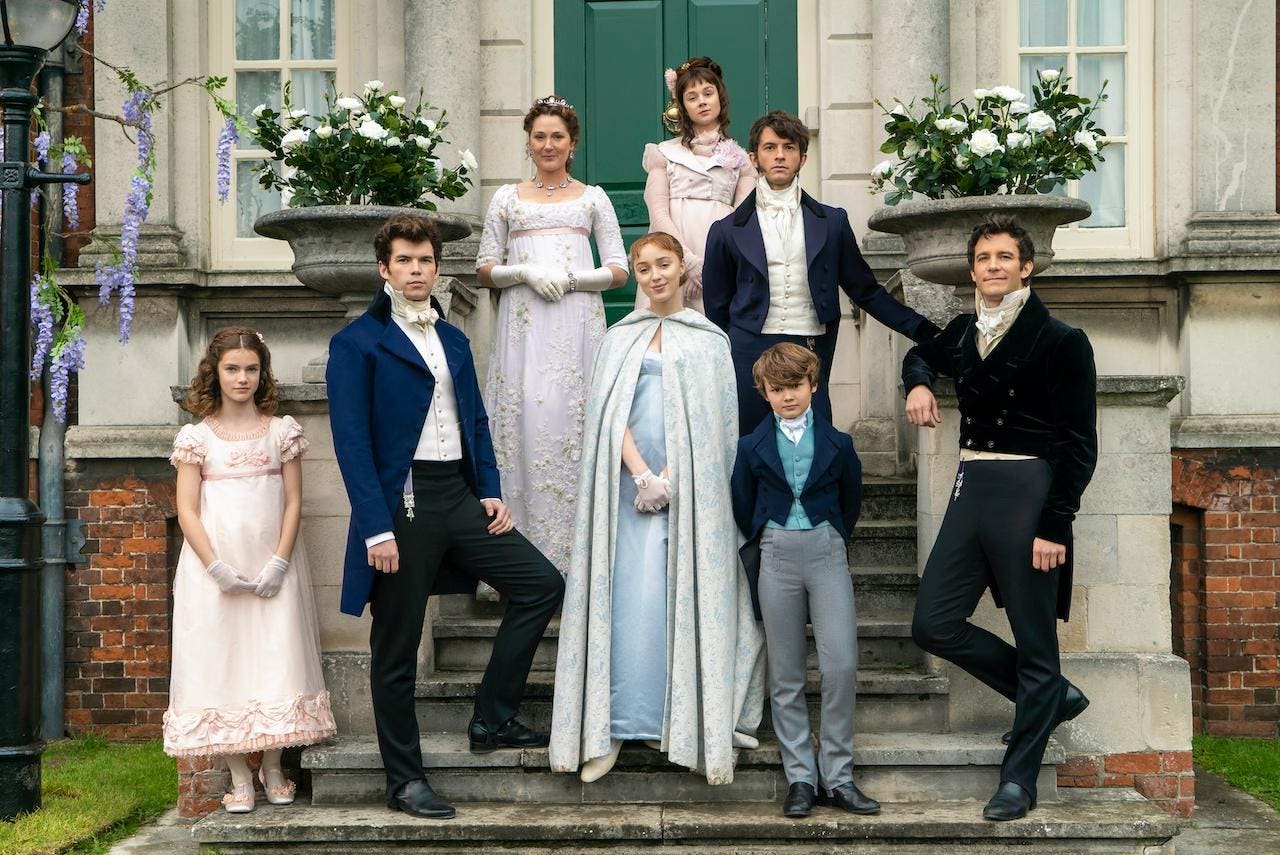 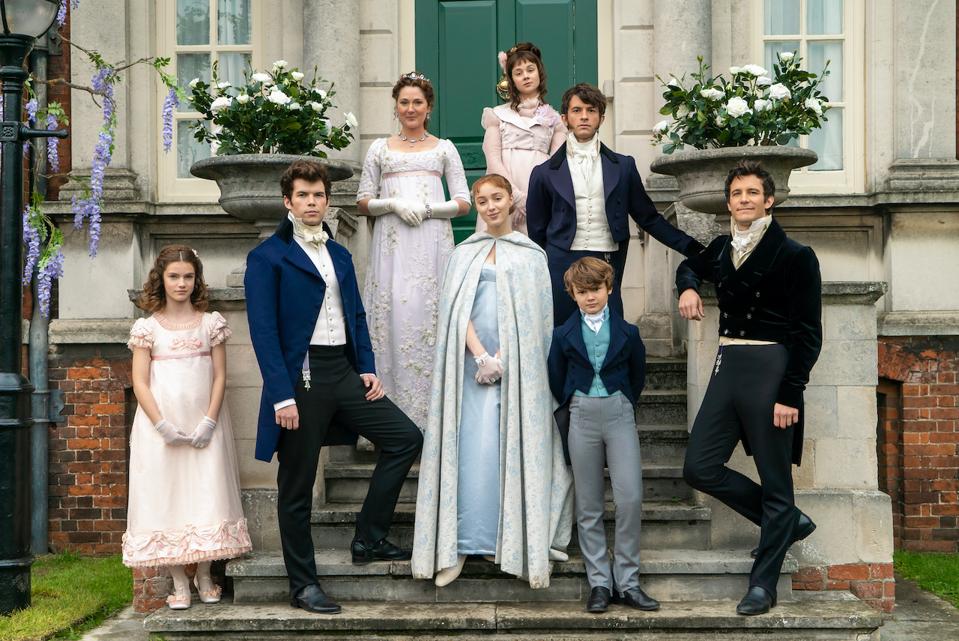 Photo by Liam Daniel for Netflix.

As we fight an out-of-control pandemic and face another round of lockdowns, most would concur that 2020 cannot end soon enough. The upside is that Netflix NFLX has a slew of new movies and series to help us get through December.

This much-needed escapism is what people are looking for and streaming is at an all-time high. Netflix just announced that The Queen’s Gambit is its most popular limited scripted series ever with a record 62 million households bingeing the seven-part series its first 28 days.

It’s fun to try and guess which new shows will be the next big hit for the streaming giant, but with so many choices on what to watch, how do you pick what to binge next? Here’s a list of five new Netflix original series premiering in December that are definitely worth the binge. 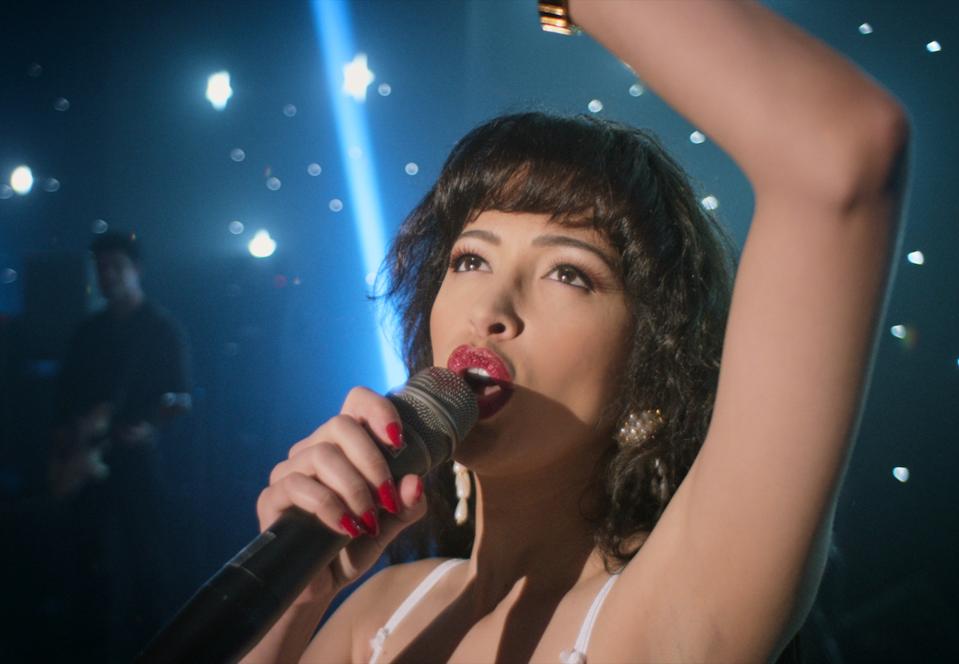 Selena: The Series Part 1 (December 4, Six Episodes): Before Selena Quintanilla became known the world over as the Queen of Tejano Music, she was a young girl from Texas with big dreams and an even bigger voice. The show explores her journey from singing small gigs to becoming the most successful female Latin artist of all time. The story also includes the many years of hard work, struggle and sacrifice the Quintanilla family endured. This deep look into Selena’s life comes from executive producers Jaime Dávila, Rico Martinez, Hiromi Kamata, Suzette Quintanilla, Simran A. Singh and Moises Zamora and was created by Zamora with Don Todd (This is Us) consulting. Christian Serratos, Gabriel Chavarria, Ricardo Chavira, Noemí Gonzalez and Seidy López star. 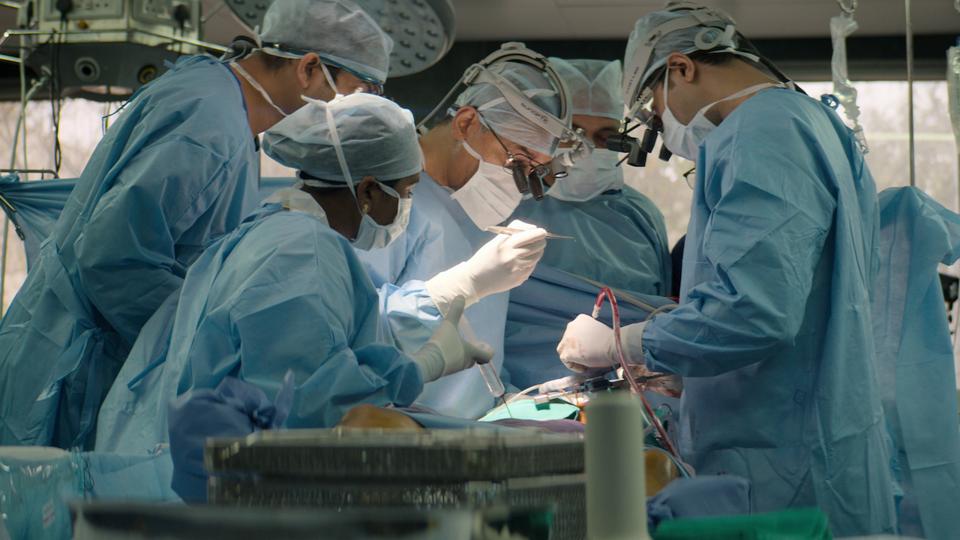 Dr. Devi Shetty is one of four surgeons featured in the new Netflix doc series ‘The Surgeon’s Cut’ … [+] premiering in December.

The Surgeon’s Cut: (December 9, Four Episodes): This docuseries crisscrosses the globe profiling four ground-breaking surgeons. Each has a unique visionary approach to their craft and the viewer will be privy to their work as they perform innovative operations and procedures on patients. These experts will also discuss their personal journeys into medicine and provide information on what it’s like to be a surgeon. Each individual story will shed light on the intricacies of the human body and delve into the fascinating ways in which the body is constantly being reinvented by new discoveries and techniques. The doctors vary in specialties, including fetal medicine, neurosurgery, transplant surgery and cardiology. 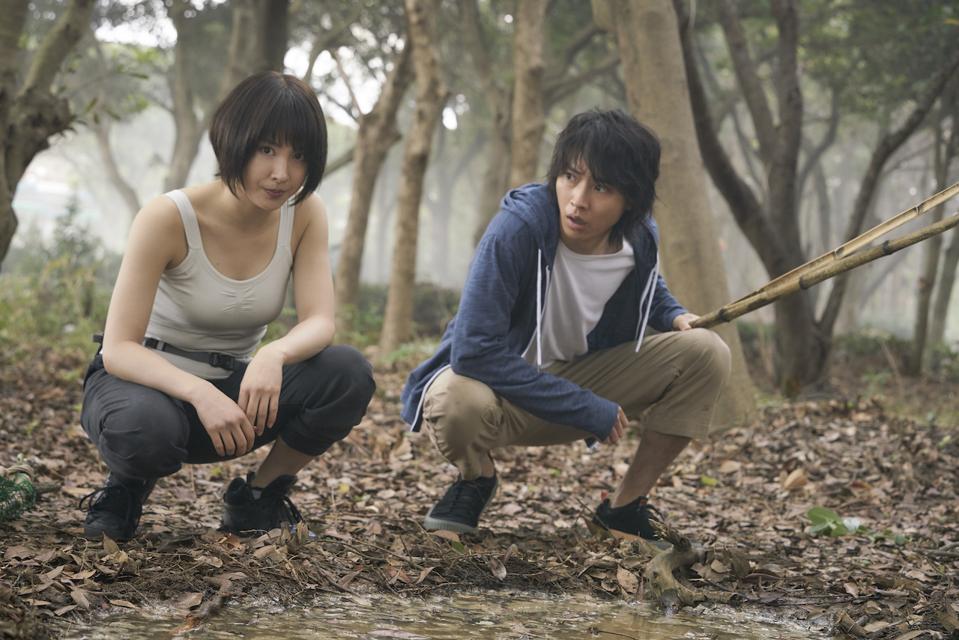 Tao Tsuchiya and Kento Yamazaki in ‘Alice in Borderland’ premiering soon on Netflix.

Alice in Borderland (December 10, Eight Episodes): This dark, suspenseful sci-fi thriller is based on the graphic novel “Imawa no Kuni no Alice” by Haro Aso and centers on Arisu, an aimless, jobless and video-game-obsessed young man, who suddenly finds himself in a strange, emptied-out dystopian parallel version of Tokyo. In this new world, he and his friends are forced to compete in a series of dangerous, sadistic games in order to survive. In this strange world, Arisu meets Usagi, a young woman who is also navigating the games alone. Together, they set out to unravel one mystery after another as they risk their lives and confront what it means to live. The series is directed by Shinsuke Sato and stars Kento Yamazaki (Kingdom, The Disastrous Life of Saiki K) and Tao Tsuchiya (Library Wars: BOOK OF MEMORIES, Mare). The series was written by Yoshiki Watabe, Yasuko Kuramitsu and Shinsuke Sato. Kaata Sakamoto executive produced alongside producer Akira Morii for production company ROBOT. 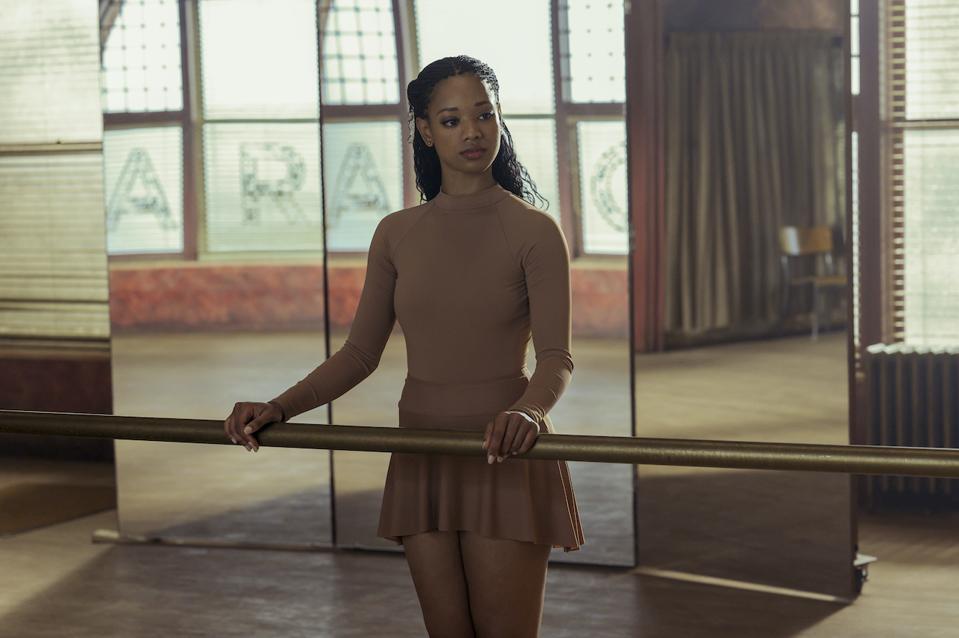 Kylie Jefferson stars as a young ballerina who is about to see the darkest sides of competition in … [+] ‘Tiny Pretty Things’ on Netflix.

Photo by Sophie Giraud for Netflix.

Tiny Pretty Things (December 14, 10 Episodes): Described as Black Swan meets Pretty Little Liars, this series is set in the elite, and very dark, world of ballet. The story, based on the YA novel of the same name by Dhonielle Clayton and Sona Charaipotra, will give the viewer an inside look into the highly competitive and extremely cutthroat world of dance as Neveah (Kylie Jefferson) starts at Chicago’s prestigious Archer School of Ballet where the quest for perfection is not only a requirement, it’s also deadly. Prior to Neveah’s arrival, one of the school’s star students, Cassie Shore (Anna Maiche), fell to her death. The official story is that it was a fatal misstep but who mistakenly falls from a four-story building? The rumor is Cassie was pushed. There’s even someone the other dancers suspect did it, but no one will fess up. Michael MacLennan serves as writer, showrunner and executive producer. Also, executive producing are Kiliaen Van Rensselaer, Jordanna Fraiberg and Deborah Henderson of Insurrection Media, Gary Fleder and Gabrielle Neimand of Mojo Films and Carrie Mudd of Peacock Alley. 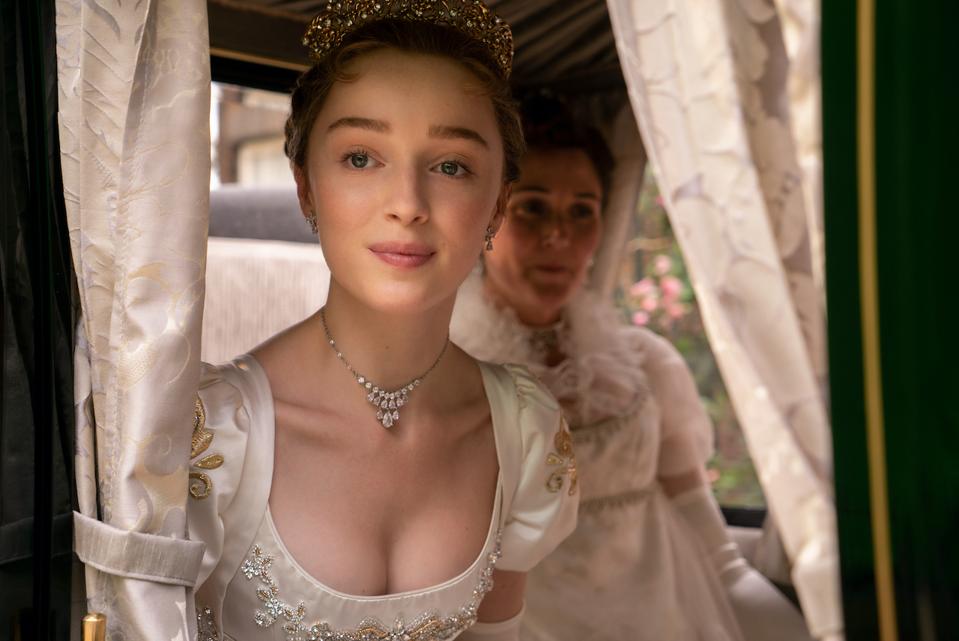 Photo by Liam Daniel for Netflix.

Bridgerton (December 25, Eight Episodes): This American period drama was created by Shondaland’s Chris Van Dusen and executive produced by Shonda Rhimes and Betsy Beers. Based on Julia Quinn’s bestselling novels, the story is set in the competitive world of Regency London high society and follows Daphne Bridgerton (Phoebe Dynevor), the eldest daughter of the powerful Bridgerton family, as she makes her debut onto the competitive marriage market. Hoping to follow in the footsteps of her parents and find a match sparked by true love, Daphne’s prospects initially seem to be unrivaled. But as her older brother begins to rule out her potential suitors, the scandal sheet written by the mysterious Lady Whistledown, voiced by the one and only Julie Andrews, casts aspersions on Daphne. Enter the highly desirable and rebellious Duke of Hastings (Regé-Jean Page), committed bachelor and the catch of the season for the debutantes’ mamas. Despite proclaiming that they want nothing the other has to offer, their attraction is undeniable and sparks fly as they find themselves engaged in an increasing battle of wits while navigating society’s expectations for their future. This series has all the goods: it’s a romantic and scandalous tale that celebrates the timelessness of enduring friendships, families finding their way and the search for a love that conquers all. Golda Rosheuvel, Jonathan Bailey, Luke Newton, Claudia Jessie, Nicola Coughlan, Ruby Barker, Luke Thompson, Sabrina Bartlett, Ruth Gemmell, Adjoa Andoh, Polly Walker, Bessie Carter and Harriet Cains round out the cast.