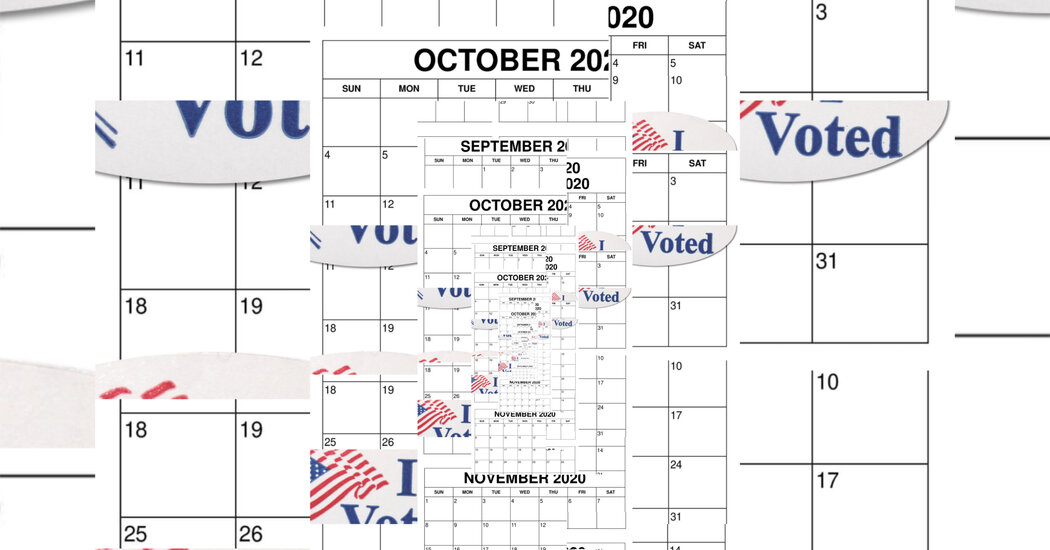 What day is it today? Is it:

2. The same day as it was yesterday, for all intents and purposes

3. Another dimension, a dimension not only of sight and sound but of mind

4. Some number of days before Election Day, though to be honest, I’m not sure how many

These last six months have so often felt like an endless loop of horror — pandemic followed by economic collapse followed by social upheaval followed by natural disaster, repeat — but Americans of all political persuasions have at least had Election Day to look forward to. Decide this thing, one way or another! Put us out of our existential misery.

Nothing is normal in this most distressing of years, though, not even Election Day, if by “normal” we mean that everyone votes at basically the same time — on Nov. 3 — and then we all stay up watching TV, or some TV equivalent, until the winner is declared later that night.

It is true that some voters will actually cast their ballots in person that day, and that various states (as well as the N.B.A., and LeBron James with his new group More Than a Vote) are trying to bolster on-the-day voting by, for instance, recruiting new poll workers and turning some arenas into polling places.

Then there are those voters who will cast their ballots in person at a polling place, but not on Election Day. Rules vary from state to state. (Please try to keep up.) People in some states might even find themselves voting before the first presidential debate. Early voting in Minnesota, for instance, starts on Sept. 18 — less than two weeks from now.

But many people, or most people (your guess is as good as anyone’s; a recent poll put it at 39 percent of Americans) plan to vote by mail this year. North Carolina began mailing its ballots on Friday. A New York Times analysis found that at least three-quarters of all American voters, roughly 80 million people, will be eligible to receive ballots in the mail for 2020.

Whether the votes themselves will be received, or counted, on time by the states is another matter entirely.

For months now, even as many states had to reschedule their primaries because of the pandemic, officials have been planning for — and warning about — the high probability of a delay in November’s results.

“What is going to be very different this year is election night,” said Elaine C. Kamarck, a senior fellow at the Brookings Institution and the author of “Primary Politics: Everything You Need to Know About How America Nominates Its Presidential Candidates.” “We might not know the answer to the presidential election for weeks, and that is going to confuse people.”

Also confusing: what the recent upheavals at the U.S. Postal Service, an institution whose effective functioning no longer seems to be one of those things Americans depend on as part of our national consensus, mean for the already-bewildering patchwork of dates and regulations governing mail-in voting in each state.

Over the summer, a number of head-spinning social media posts declared that Election Day is actually taking place on October 20 this year, given the mail troubles. That is not true, according to the fact-checking site PolitiFact, which investigated the claim with the Postal Service.

Or, not exactly true.

In July, the Postal Service took out its fog machine and sprayed even more confusion over the issue, sending ominous warning letters to states urging them to require that voters request ballots at least 15 days before the election.

By any objective measure, of course — by the rules of the calendar and the laws of science — the progression of time today, in the seventh month of the coronavirus pandemic, is exactly the same as it has always been. It may feel like today is some fake day outside the normal calendar — March 3000, or, if you prefer, June 666 — but it is not. The year is moving forward at a constant rate. The seasons are changing; the days are passing. An hour is still an hour.

It’s our perceptions that are discombobulated, Ellen Braaten, assistant professor of psychology at Harvard Medical School, pointed out recently in STAT News. Our routines are awry, and things we depend on to happen at a particular time have not happened. We are disturbed and battered by the bewildering barrage of events, even as our own lives seem to be stuck in stressed-out states of animated suspension. “If we’re really anxious, we might experience time as slowing down,” Ms. Braaten said. “Anxiety is one of those things that can actually make time feel like it’s going on forever.”

Some things are happening at the same time as before, but not in the same way. Memorial Day didn’t signal the start of summer as many people usually experience it. Labor Day won’t usher in a normal, new-beginning fall. School feels more like “school.”

Other events have happened, but at new times. Sports are being played in truncated seasons on jury-rigged schedules — is it really the 2020 Olympics if it takes place in 2021? — with cardboard cutouts instead of people in the stands. A return to a sense of normalcy in the calendar seems to depend on a vaccine against Covid-19, but despite researchers’ efforts to accelerate a process that typically takes years, we don’t know when we will get one.

“Everything is topsy-turvy right now,” said Michael N. Shadlen, a professor of neuroscience at Columbia University. “It’s extremely disorienting when your calendar gets messed up — as if someone planted you in the middle of the Sahara with no GPS.”

If this were a regular election season, like 2016, which now feels like it was 400 years ago, Ms. Kamarck would have spent much of the summer on the road. She would have traveled to Milwaukee for the Democratic National Convention, which would have been held in July, as regularly scheduled, and to Charlotte, N.C., in August for the Republican National Convention. She would have mingled with crowds of strangers and talked to them about their political views.

But she did none of those things. She stayed home, watching the conventions from afar and experiencing for herself the weirdness of the passage of time, in politics as in life.

“It’s very, very slow,” Ms. Kamarck said. “We don’t have the usual markers. People aren’t rushing out to do school shopping. They’re not rushing out for new clothes.”

In a normal year, we would be on the verge of a ratcheting up of down-to-the-wire campaign activity. But activity is not really activity this year either, unless it is done by phone or computer. “Politically, the campaigns aren’t out there on the ground,” Ms. Kamarck said. “For people in politics, we simply aren’t traveling.”

It seems almost beside the point now to mention something that President Trump said a little over a month ago, because the president’s way of flooding the zone of incredulity worsens the sense that time is stretching and snapping back on us.

But here he was, adding to our sense of temporal and democratic instability with an incendiary tweet at the end of July that denounced mail-in voting, saying without evidence that “2020 will be the most INACCURATE AND FRAUDULENT Election in history” and suggesting that we “delay the Election.”

(Note to citizens: the president can do a lot of things. But he cannot do that.)