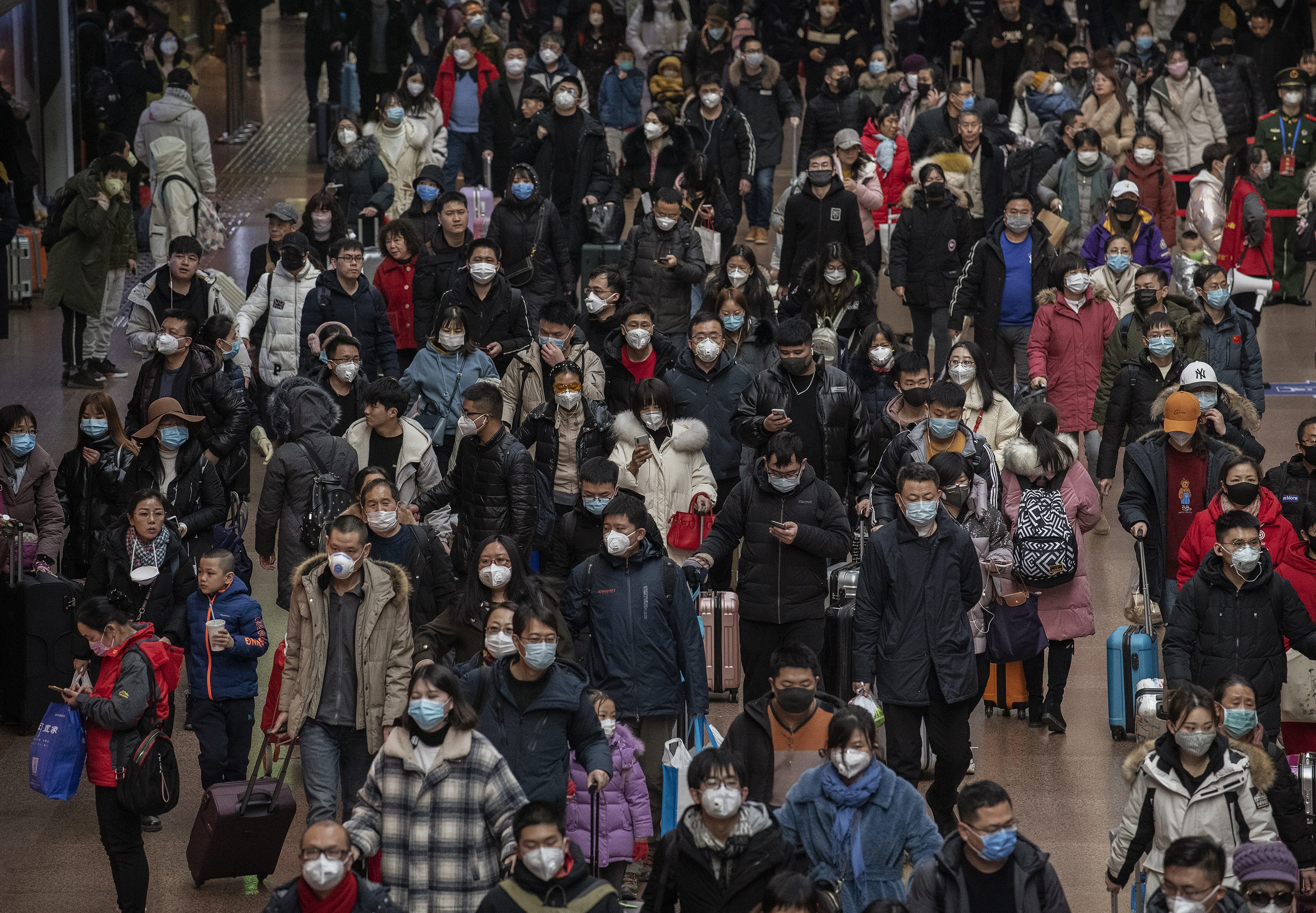 The deadly coronavirus has afflicted another person in the United States, health officials confirmed Friday, bringing the total number of U.S. cases to two as Chinese health officials scramble to contain the outbreak that has killed 26 people.

A Chicago woman returned Jan. 13 from Wuhan, the epicenter of the outbreak, and began experiencing symptoms a few days after arriving home, said Dr. Allison Arwady, commissioner of the Chicago Department of Public Health.

The 60-year-old woman called her doctor after symptoms arose and she was admitted to a hospital and placed in isolation, health officials said. Further testing confirmed the virus.

Arwady said the woman is “clinically doing well and in stable condition.” She did not have extended contact with anyone outside of her home, attend a large public gathering or use public transportation, Arwady said.

The woman was not symptomatic while flying, and Arwady told reporters at a Chicago news conference, “The CDC does not believe that, in the time before symptoms develop, the patients are able to be contagious.”

The risk to the U.S. public remains low but more cases will likely be confirmed in the coming days, said Dr. Nancy Messonnier, the director of the National Center for Immunization and Respiratory Diseases at the Centers for Disease Control and Prevention.

At least 63 potential cases are under investigation in 22 states, and 11 were confirmed negative, Messonnier said. The other potential cases are being tested. In airports around the U.S., over 2,000 returning travelers have been screened, the CDC said.

Health officials are still in the early stages of understanding the virus and its symptoms, Messonnier told reporters Friday. She said the virus has an incubation period of about 14 days and it was too early to say whether it is more or less infectious than other coronaviruses like SARS or MERS.

“Our biggest concern would be household contacts – people who are spending extended periods of time having conversations,” Arwady added.

The World Health Organization on Thursday declined to categorize the outbreak as a global health emergency, saying there is no evidence of human-to-human infection outside China.

At least 830 people in China have been sickened and tens of millions are under lockdown as the coronavirus sweeps across the country.

Public transpiration halted for roughly 36 million people in 13 cities in central China, including Wuhan, where the virus was first detected last month. Other major cities across the country canceled events tied to the Lunar New Year celebration, a busy time for travel.

Beijing’s Forbidden City, Shanghai Disneyland and other tourists spots have all closed. Reuters and CNN reported that part of the Great Wall near Beijing will close starting Saturday.

More on coronavirus:Something far deadlier than the Wuhan coronavirus lurks near you, right here in America

Authorities in Wuhan said Friday they were constructing a 1,000-bed hospital like one built in Beijing during a SARS outbreak, a similar respiratory virus. The 2003 outbreak left about 800 people dead after spreading from China to more than a dozen countries. The coronavirus hospital is planned for a 270,000-square-foot lot and will be completed early February.

A 36-year-old man in Hubei died Thursday after a sudden cardiac arrest. The man was admitted to a hospital last month with a fever and is now the youngest known fatality from the virus. Most deaths have been older patients.

While most cases have centered in China, an increasing number of cases have been confirmed in other places, including South Korea, Japan, Singapore, Hong Kong, Macao, Taiwan, Thailand and Vietnam.

Are there other coronavirus cases in the US?

The first U.S. case was confirmed in Washington state after a man in his 30s returned from Wuhan last week and became ill.

Other scares have popped up around the U.S., too. A student from Tennessee Tech University was being tested for possible infection after he presented very mild symptoms possibly related to the virus, the university and state health officials said Thursday.

A Texas A&M University student was also being tested and is isolated at home, local health officials said. The man, who recently traveled from Wuhan, is improving, said Dr. Eric Wilke of the Brazos County Health Authority.

In New York, four people were under investigation and in isolation as their cases are being tested. So far, one of the cases has been proven negative and three are still pending, according to Gov. Andrew Cuomo.

U.S. Senators were briefed Friday on the virus by top health officials.

Sen. Patty Murray, D-Wash., the top Democrat on the Senate Health Committee, said she wasn’t sure how much the virus would spread, but said the CDC had resources in place to do additional testing for the virus if needed.

“The most important thing is that they have the resources in place should they need to do additional testing,” she said.

Sen. Josh Hawley, R-Mo., said, “We do have two confirmed cases in the United States. I think we’re likely to see more.”

The State Department issued a warning Thursday not to travel to Hubei province amid the outbreak and said all non-emergency U.S. personnel and their family members were to leave the province.

“We don’t want the American public to be worried about this because their risk is low,” says Anthony Fauci, head of the National Institute of Allergy and Infectious Diseases. “On the other hand, we are taking this very seriously and are dealing very closely with Chinese authorities.”

“At its current rate, the Wuhan coronavirus is less deadly than the current flu season. This is not to diminish the importance of preventing the spread of this virus but to make sure that our responses are based in evidence and follow common sense,” he said.

What else is being done to contain the coronavirus outbreak?

Some hospitals in Wuhan have faced in influx of patients, prompting calls for supplies like masks and goggles. The South China Morning Post reported that military doctors and medical personnel are aiding a civilian medical staff in the intensive care unit at Wuhan Pulmonary Hospital.

Airlines around the world increased screenings of passengers arriving from China, including Qatar Airways, which said it had installed thermal scanners at its main hub, Hamad International Airport.

In the U.S., airports in New York, Chicago, Los Angeles, Atlanta and San Francisco  stepped up health checks for passengers arriving from China.

What is coronavirus? What are the symptoms?

Coronaviruses are a large family of viruses that cause illness ranging from the common cold to pneumonia. Common signs of infection include fever, cough, shortness of breath and breathing difficulties. In more severe cases, infection can cause severe acute respiratory syndrome, kidney failure and death.

How to protect yourself from coronavirus?

Health officials said the virus, which probably spreads through tiny droplets when a person coughs or sneezes, is low-risk. Officials urged people to take the usual cold and flu season precaution: frequent hand washing, covering your mouth when coughing or sneezing and staying home when you don’t feel well.

“These illnesses can pop up anywhere,” said Trish Perl, chief of infectious diseases at UT Southwestern Medical Center in Dallas. “This is a dynamic situation that can dramatically change from day to day.”

Where did coronavirus come from?

Coronaviruses are zoonotic, meaning they are transmitted between animals and people. Many of the initial cases were linked to a seafood and meat market in Wuhan. Chinese health officials, which first reported the cases last month, said human-to-human transmission has been confirmed.