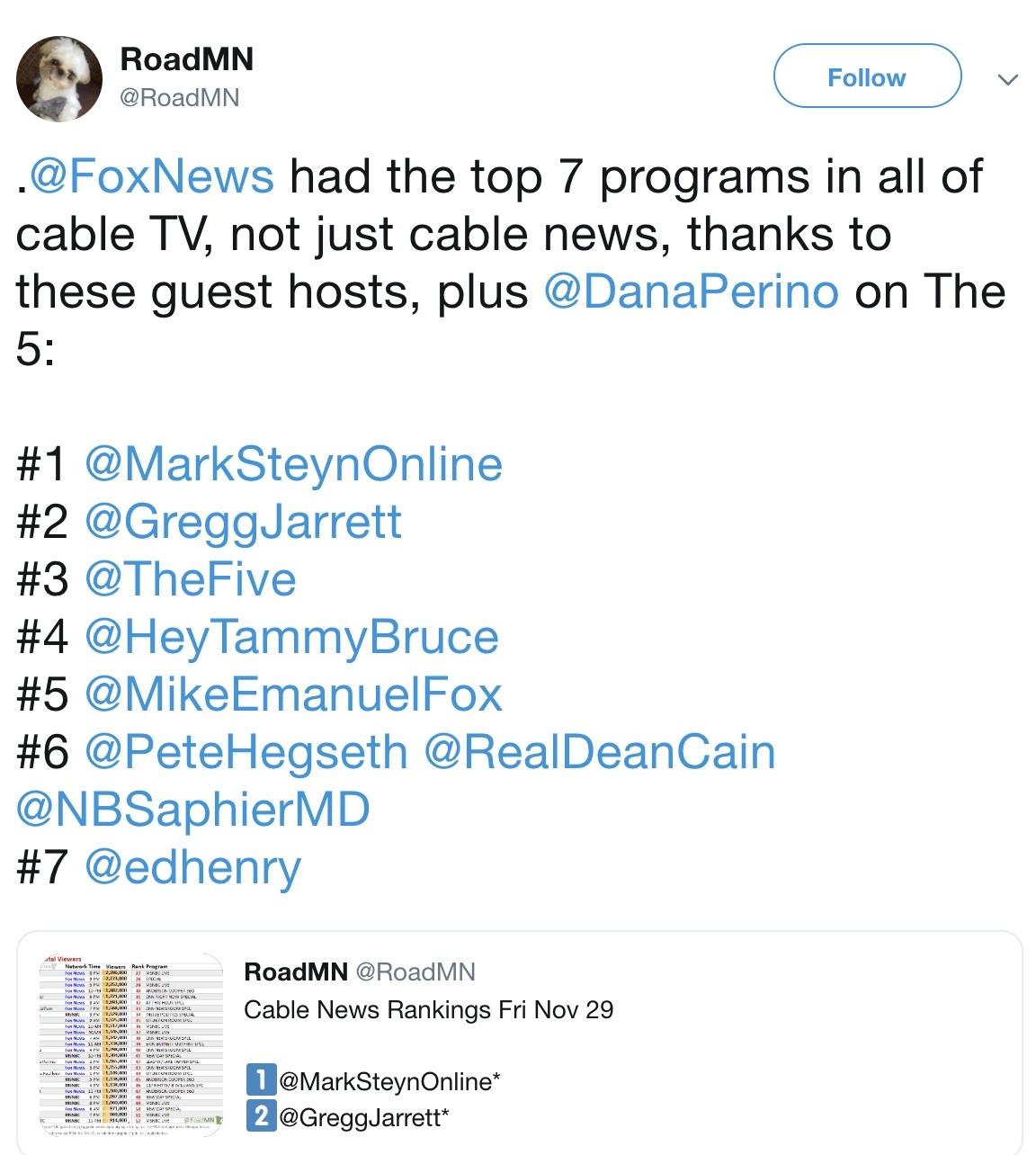 ~The week began and ended with Islamic violence, in London and Florida respectively. Steyn addressed the Fishmongers’ Hall attack in his column “Unlearning Together“, and the Pensacola attack in “Too Stupid to Survive (cont.)“.

~On Monday Mark joined Tucker Carlson to celebrate the launch of Joe Biden’s “No Malarkey” tour. Click below to watch:

~On Tuesday Laura’s Links roamed the Internet and rounded up a slew of stories from a partyless prince to the world’s worst Hitler.

Tuesday also brought news that Steyn was once again the King of Cable …for one night only.

~On Wednesday Mark checked in with Alex Pierson on Toronto’s Global News Radio 640 to mull Trump, Trudeau, Macron and the fiasco of Nato’s seventieth birthday beano. Click below to listen:

~On Thursday Steyn returned to “Tucker Carlson Tonight” to consider the newfound religiosity of Nancy Pelosi:

~Friday was the thirtieth anniversary of the “Montreal Massacre”. Mark’s reflection on the atrocity and its distortion by the Canadian state was our most read piece of the week.

~At the weekend we like to avert our gaze from the grubby churn of politics and kick loose with music and movies. The peerless Kathy Shaidle returned to our Saturday cinema beat with Kirk Douglas’ Ace in the Hole, and our weekly musical feature found Mark in conversation with a legendary character of Tin Pan Alley.

Much of what we do here each month, including Tales for Our Time, Steyn’s Song of the Week and our Sunday Poem, we also do live and on water on our Mark Steyn cruises. We’re thrilled that so many have already signed up for next year’s Third Annual Steyn Cruise, with Conrad Black, Michele Bachmann, Douglas Murray and more. But, if you’re thinking about it, please don’t leave it too late. For more information, call +1 (770) 952-1959 if you’re dialing from beyond North America – and, if you’re calling from Canada or the US, it’s 1-800-707-1634. Or you can email your query here.

Another week of print, audio and video delights at SteynOnline begins tonight with our Song of the Week – but, if you can’t wait a few hours, an hour of musical delights can be found in Mark and Jessica’s Christmas album, which is also the perfect stocking stuffer.

News DSMW - January 17, 2021
0
The acting defense secretary ordered the spy agency to appoint Michael Ellis, who has been accused of having a hand in one of the Trump administration’s most contentious legal decisions. ...

How Republicans Are Warping Reality Around the Capitol Attack

How Republicans Are Warping Reality Around the Capitol Attack