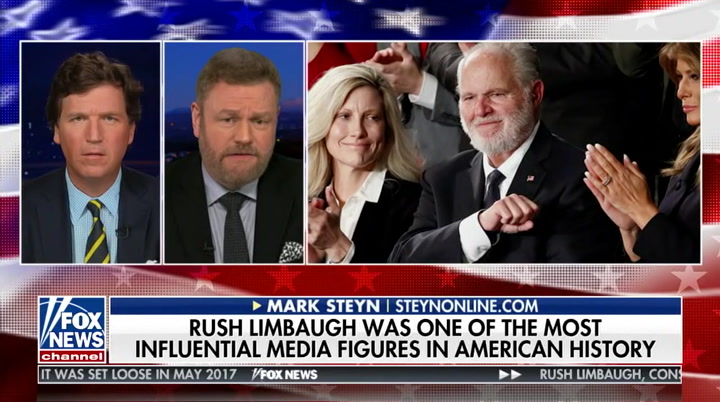 Programming note: On Monday Mark will join Kathryn Limbaugh, the love of Rush’s life, on a very special edition of The Rush Limbaugh Show.

~The week was dominated by the death of a colossus of American broadcasting and of American conservatism. Mark penned his appreciation of Rush here, and later joined Tucker Carlson for more thoughts. Click below to watch:

On Friday Mark was back at the Golden EIB Microphone to host three hours of Rush at his best from across the decades. Click below to listen:

Steyn will have more to say on a Fox News special tonight. Here’s how the rest of the week went:

~The se’nnight began with a Sunday Poem and a Song for Valentine’s Day.

~Mark’s Monday Notebook looked at the official lies being hammered down our throats – and the ones being quietly withdrawn.

~On Tuesday Steyn returned to America’s Number One radio program for what would prove to be the last Rush Limbaugh Show of Rush’s lifetime. Mark talked about blizzards real (Texas) and metaphorical (Washington), and ways of negotiating through them. Also up for discussion were the butchery of Cuomo, the machinations of China, and the long-distance telephone calls of Kamala Harris:

~On Wednesday Laura’s Links rounded up the Internet from pandemic police states to Israeli street food.

~On Thursday Steyn guest-hosted Tucker Carlson Tonight. This was a much talked-about monologue:

~On the weekend edition of The Mark Steyn Show Mark unveiled a brand new feature from Andrew Lawton and considered two orchestras – the Royal Philharmonic and the Electric Light.

The Mark Steyn Show and Steyn’s Sunday Poems are made possible by members of The Mark Steyn Club. The Mark Steyn Club is not to everyone’s taste, but we do have members in every corner of the world from Virginia to Vanuatu, and, if you have a chum who’s a fan of classic poems on video or classic fiction in audio, we also offer a special gift membership.

A new week at SteynOnline begins tonight with Steyn’s Song of the Week. and continues tomorrow with Kathryn Limbaugh joining Mark for that very special edition of The Rush Limbaugh Show.


Warning: number_format() expects parameter 1 to be double, string given in /home/customer/www/dontspreadmywealth.com/public_html/wp-content/plugins/td-social-counter/shortcode/td_block_social_counter.php on line 126

News DSMW - February 25, 2021
0
PORT ST. LUCIE — Noah Syndergaard already has been placed on the 60-day injured list to begin the season, but the energy he’s showing at the Mets’ spring training complex is that of somebody ready to roll. On Wednesday, the right-hander — who is rehabbing from Tommy John surgery — threw...
MORE STORIES