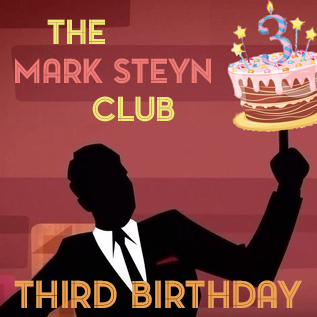 Happy Victoria Day weekend to all our Canadian readers, although the festivities are somewhat muted this year. Mark has a brace of regal movies for you, but will be spending the day itself south of the border on America’s Number One radio show.

Meanwhile, in case you missed it, here’s how the last seven socially distant self-isolated mandatory-quarantined sequestered-without-end days looked to Steyn:

~The week began with Mark hailing musically the return of the milkman and the death of everything else.

~Monday’s edition of The Mark Steyn Show offered a Coronacopia of news and comment, plus Obama’s concern for the rule of law four years too late, a Wanker Commonwealth Copper, Your Monday Mohammed, tigers and torturers, and the general crepuscular vibe. You can hear the full show here.

~On Tuesday Mark began an encore presentation of an especially timely Tale for Our Time: Steyn’s serialization of a world where the entire planet is quarantined in small apartments because it is unsafe to ventured outside. Click to hear Mark read Part One of The Machine Stops by E M Forster here, Part Two here, and the conclusion here – or, for a good old binge-listen, go here.

Also on Tuesday, Laura’s Links rounded up the Internet from the Corona niqab to socially distanced squatters.

~Steyn’s Thursday Notebook considered various aspects of the Permanent Emergency from masks to freedom of speech to the dearth of duets: It was our most read piece of the week.

~Friday’s Mark Steyn Show looked at masking and unmasking from the Great War to Trump’s inauguration day, plus the new crime of appearing to have parted from someone, and doing “My Way” your way. You can hear the full show here.

~For our weekend movie date, Kathy Shaidle pondered what would have happened if Hitler had conquered Britain …and the British had put up with it.

The Mark Steyn Show and Tales for Our Time are made with the support of The Mark Steyn Club. On this third anniversary of our Club, we’re delighted by all those who’ve decided to hop aboard for our fourth year. Virginia member Kent Wilson says:

No matter what craziness the next year brings — e.g., COVID-20, 21, & 22 / murder hornets / President Biden — at least I’ll keep my sanity thanks to Mark (and his talented team) and my fellow Club members! Thank you all!!

Thank you, Kent, but let’s try to hold that litany of grim predictions down to 70 per cent at most. Judith Williams adds:

You mean so much to me (and my sanity!). Happy House Arrest from Chapel Hell, NC!

Happy House Arrest to you and yours, Judith. We shall overcome!

A new week at SteynOnline begins tonight with our Song of the Week – and continues tomorrow when Mark returns to the Golden EIB Microphone on America’s Number One radio show.

When ‘Terrorists’ Aren’t Terrorists: The Danger of Twisting Words to Suit Our Politics

The Scars of Utopia