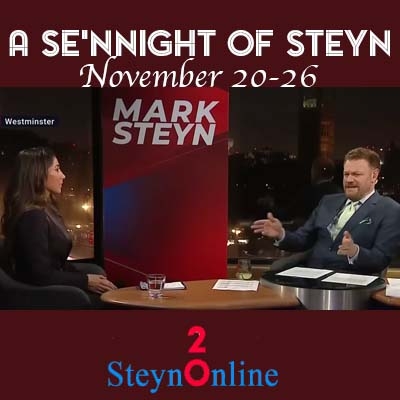 Bookings for our 2023 Mark Steyn Cruise on the Adriatic continue to come in. We’re looking forward to seeing many of our Mark Steyn Club members and SteynOnline readers at sea alongside James Golden, Eva Vlaardingerbroek, Leilani Dowding, and other special guests. Get all the details here.

~The week began with a continuation of SteynOnline’s twentieth birthday observances. By Sunday, we were ready to relive Mark’s 2019 thoughts on deep state machinations, including his interview with deep state victim George Papadopoulos.

Video poetry being where the big bucks are, Mark did a reading of Jonathan Swift’s “Stella’s Birthday.”

Mark capped off a busy Sunday by giving a Song of the Week treatment to the Whitney Houston hit that’s actually a Dolly Parton song, “I Will Always Love You.”

~We got to 2020 in the birthday countdown Monday, prompting a reheat of Mark’s contemporary inversion of Anthony Hope’s classic The Prisoner of Zenda – The Prisoner of Windsor.

Mark was back on the telly Monday night, kickstarting another week of GB News programmes with Patrick O’Flynn on Tory wreckage, Arlene Foster on the cold peace of Belfast, and James Melville and Christopher Monckton on the House of Lords.

~Tuesday morning began with Mark’s comments from 2021 on Rush Limbaugh’s death and the hole it left in the American media landscape.

Later on Tuesday, Mark chatted about the UK “Conservatives” with William Clouston, the plans they’re making with Lois Perry, a class apart with Dominique Samuels, and a comprehensive failure with Ben Habib.

~The birthday countdown reached the present year Wednesday, so Mark shared his summer special on Victims of the Vaccine.

Wednesday’s Mark Steyn Show welcomed David Starkey on Britishness, Kellie-Jay Keen on a call from the coppers, Alexandra Marshall on the dawn of digital identity, and Jamie Jenkins on migrants and mathematics.

~Thursday was Thanksgiving in America and SteynOnline’s vaunted twentieth birthday around the world. We marked the occasion with a Thanksgiving audio special.

Laura Rosen Cohen served up a healthy portion of human grace in her links a bit later, as well as some of the usual oddities from around the internet, such as Jewish Christmas songs, Europe’s cold winter, and breaking up with the pediatrician.

Mark wrapped up the GB week with a show tackling “family reunification” with Kelvin MacKenzie, dancing to Facebook’s tune with Maxwell Harrison, and chats with Leilani Dowding and Toby Young.

~The SteynOnline birthday celebration weekend continued Friday with Mark back at the microphone for a live Clubland Q&A, during which he fielded big picture questions from Mark Steyn Club members around the world about the last two decades.

~Saturday’s Hundred Years Ago Show was about eighty years off as Mark focused instead on the headlines of 2002, from the birth of the Department of Homeland Security to vicious royal canines to Michael Jackson’s baby livin’ off the wall.

A new se’nnight at SteynOnline begins later this morning and continues with a very busy week ahead.

A Se’nnight of Steyn: January 29-February 4

The First of Ninety-Nine Red Balloons