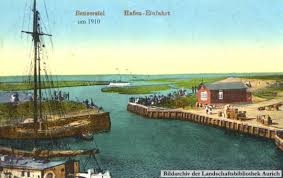 Just ahead of the ante-penultimate episode of our current Tale for Our Time, as the Google-YouTube-Facebook-Twitter-PayPal-Patreon Grand Deplatforming accelerates and the glory days of the messy decentralized Internet of yore recede ever further into the past, I want to thank all of you who keep this l’il ol’ mom’n’pop website and its various activities as part of their your routine. Hardly a day goes by when I don’t recall some long-gone blogger of yesteryear lost in the hideous degeneration of the Internet into a cartel of control-freak social-justice billionaires.

Thank you, too, for all your insightful comments on our latest yarn – The Riddle of the Sands. Elizabeth Hoerning, a First Month Founding Member of The Mark Steyn Club, writes:

A nearly belated note to tell you how much I’ve enjoyed your reading of Childers’s tale, whose plot is as slow, shifting, and gripping as the sands themselves. I’ve spent some little time in, and have a sentimental attachment to, southwestern Germany and Alsace (and can confirm the author’s line about Alsatian monuments), but am unfamiliar with the accents, waterways, and topography of the northern lowlands. It is wonderful to learn about them so, almost as if I were learning to navigate them myself. I am reminded of landscape descriptions of the English fen country (think Dorothy Sayers’ The Nine Tailors), upon which Carruthers and Davies find the Germans to have their sights set.

You do us all a valuable service in selecting and presenting each of these Tales, Mark. Thank you once again.

Thank you, Elizabeth. As you’ll see from last night’s comments, not everyone feels as you do, but chacun à son goût. There’s plenty of alternative capers in this series – sci-fi, historical romance, fantasy, comedy – so do check out the home page of Tales for Our Time in which we’ve laid them all out in a convenient Netflix-esque “tile” format that makes it easier for listeners to pick out their preferred audio entertainment of an evening.

And with that let’s proceed to Episode Twenty-Nine of my serialization of Erskine Childers’s classic tale. In tonight’s episode, Carruthers finds himself turning stowaway:

It was something of a gymnastic masterpiece, since I was lying—or, rather, standing aslant—on the rough sea-wall, with crannies of brick for foothold and the water plashing below me; but then I had not lived in the Dulcibella for nothing. My chain of thought, I fancy, was this—the tug is to carry my party; I cannot shadow a tug in a rowboat, yet I intend to shadow my party; I must therefore go with them in the tug, and the first and soundest step is to mimic her crew. But the next step was a hard matter, for the crew having finished their job sat side by side on the bulwarks and lit their pipes. However, a little pantomime soon occurred, as amusing as it was inspiriting. They seemed to consult together, looking from the tug to the inn and from the inn to the tug. One of them walked a few paces inn-wards and beckoned to the other, who in his turn called something down the engine-room skylight, and then joined his mate in a scuttle to the inn. Even while I watched the pantomime I was sliding off my boots, and it had not been consummated a second before I had them in my arms and was tripping over the mud in my stocking feet. A dozen noiseless steps and I was over the bulwarks between the wheel and the smoke-stack, casting about for a hiding-place.

But to where is the plucky chap stowing away? Members of The Mark Steyn Club can hear Episode Twenty-Nine by clicking here and logging-in. Earlier installments of The Riddle of the Sands can be found here – and thank you for all your comments, thumbs up or down, on this latest serialization. Very much appreciated.

If you’d like to know more about The Mark Steyn Club, please click here – and don’t forget, for fellow fans of classic fiction and/or poetry, our Steyn Club Gift Membership.

I’ll see you back here tomorrow for the penultimate episode of The Riddle of the Sands.