The cliffhanger elections on Tuesday night in Kentucky and New York didn’t just leave the candidates and voters in a state of suspended animation wondering who had won. Election officials, lawyers and political strategists in both parties said the lack of results was a bracing preview of what could come after the polls close in November: No clear and immediate winner in the presidential race.

With the coronavirus pandemic swelling the number of mailed-in ballots to historic highs across the nation, the process of vote-counting has become more unwieldy, and election administrators are straining to keep up and deliver timely results. The jumble of election rules and deadlines by state, including in presidential battlegrounds like Pennsylvania and Wisconsin, all but ensure that the victor in a close race won’t be known on Nov. 3.

And top election officials are warning that if the race between Donald J. Trump and Joseph R. Biden Jr. is anything but a blowout, the public and the politicians need to recalibrate expectations for when the 2020 campaign will come to a decisive conclusion.

“I don’t think it matters when you go to bed — you can stay up as late as you want, you won’t have an answer,” said Chris Thomas, who served for 36 years as the state director of elections in Michigan.

Already in this primary season, state after state has seen it take longer than usual to tally enough votes to project winners. New York and Kentucky are just the latest, vivid preludes for the general election: Record numbers of absentee ballots that are more labor intensive to count; regulations that delay the counting process; fears about in-person voting because of the virus; and legal maneuvering around how late people can vote, including allowing ballots to be postmarked all the way up to Election Day.

In November, a significant delay would not just test the nation’s resolve and patience, especially if late-counted votes reverse the early tally in a pivotal state, as has often happened in statewide and congressional contests. But a holdup could play into the hands of Mr. Trump, who has been on a tear recently to undermine trust in fairly conducted elections, such as his baseless accusations that mail-in ballots are somehow systemically “rigged.”

While the virus is almost certain to make the November election the most unusual since the hanging chads of 2000, any drawn-out or disputed vote count could provide Mr. Trump with an opening to fight results he did not like and shake trust in American democracy.

Matt Masterson, a senior adviser on election security for the Department of Homeland Security, said the greater number of mail-in ballots this fall would make results take longer to tabulate than in the past, but he was hesitant to even use the word “delay.”

“That suggests something’s wrong,” he said.

“The need to take a longer time to process and count these ballots is a sign of the process working,” Mr. Masterson added. “It is in no way an indication of anything malicious.”

In the presidential race, the vote margins in most places are expected to be wide enough to allow media organizations, such as The Associated Press, to project winners of individual states even before all the votes are tabulated. But delays are widely expected in at least some key states, which could leave the country in momentary political limbo if neither candidate has reached the 270 electoral votes required to win the presidency.

David Scott, deputy managing editor for The A.P., said how long it takes to call the presidential race in November will depend on the closeness of the race and whatever rules states impose between now and Election Day. The A.P. will have to account for the huge wave of mail-in votes, especially after incorrectly declaring two races in Georgia were headed to runoffs this month.

In a sign of its cautious approach, the organization has not yet declared that Representative Eliot L. Engel, Democrat of New York, lost on Tuesday, even as he trails his challenger, Jamaal Bowman, by nearly 27 percentage points.

“I’ve been saying to anyone who will listen that I do not think we will know who won the presidential election on Nov. 3,” said Matthew Weil, director of the elections project at the Bipartisan Policy Center, a think tank.

Mr. Weil pointed to three states in particular he expected to be hot spots for slow counting trouble: Michigan, Pennsylvania and Wisconsin. Those three states, which were key to Mr. Trump’s victory in 2016, are seen by both the Trump and Biden campaigns as linchpins to the path to victory.

And all three of those states have one rule in common: they do not currently allow the tabulating of mail-in ballots until the day of the election, though election officials are pressing to relax those restrictions.

In Pennsylvania, 2020 is also the first presidential election in which all voters will be allowed to cast ballots by mail. That, combined with the pandemic, drove absentee ballot requests during the June primary to 1.8 million — 17 times as many ballots as 2016, according to the secretary of state’s office. A winner in the statewide contest for auditor was not declared for more than a week.

“You physically have to remove all those ballots from all those envelopes and scan them in. It’s a time-consuming process,” said Nick Custodio, a deputy city commissioner in Philadelphia, where he said absentee ballot requests soared from 5,742 in the 2016 primary to 225,231 in 2020.

Just the act of tabulating those ballots would be further complicated if there is a significant coronavirus outbreak in the fall — as epidemiologists have warned could happen — requiring social-distancing and extensive sanitation efforts. 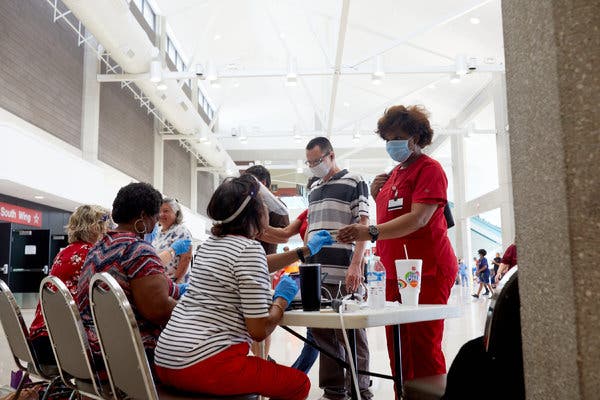 People showed up to vote in masks for Kentucky’s primary on Tuesday.Credit…Erik Branch for The New York Times

In Michigan, local clerks and the secretary of state, Jocelyn Benson, a Democrat, have pleaded with state legislators for months to allow them to begin processing absentee ballots before Election Day, given the expected surge of mail votes. A bill carried by a Republican state senator who is the former secretary of state has stalled because of opposition from her own party.

At a hearing in Lansing on Wednesday, Republican legislators criticized Ms. Benson for sending all Michigan voters absentee ballot applications, echoing a complaint Mr. Trump himself has made, rather than addressing the logistical challenges of counting the vote in November.

Wisconsin had historically seen six percent of ballots sent by mail, according to Reid Magney, a spokesman for the Wisconsin Election Commission. In the state’s April primary, that figure soared to 60 percent. Now the state is readying a mailer with an absentee ballot request form for all 2.7 million voters who have not already requested such a ballot this fall.

“It’s hard to know exactly how long it will take to process those,” Mr. Magney said of the expected glut of mail-in votes.

One ongoing legal battle is over how late each state will accept ballots. The most flexible states, such as California, allow voters to postmark them on Election Day, which can drag the ballot counting out for weeks. In 2018, one California Republican, Young Kim, traveled to Washington and posed for the House freshman class picture in mid-November — only to end up losing her race once all the votes were counted.

On election night in 2018 after a hard-fought Senate race in Arizona, Martha McSally, the Republican candidate, had an initial lead over Kyrsten Sinema, the Democrat, but days of vote-counting ultimately delivered the victory to Ms. Sinema. Along the way, Mr. Trump lobbed charges of “electoral corruption” without evidence.

“Look, everything about the way this president behaves when it comes to voting causes me concerns,” said Marc Elias, a top Democratic elections lawyer. “I can only imagine what he’ll be like after Election Day.”

Bob Bauer, an attorney and senior Biden adviser who works on the campaign’s voter protection and election security programs, urged Americans to vote “through all available means” even if “some states could take longer than usual to report final official results.”

“If the people speak, they will be heard, and there is nothing Donald Trump can do about it,” Mr. Bauer said.

Justin Clark, senior counsel to the Trump campaign, cited concerns with voting by mail, which he said “leads to confusion, chaos, and delayed results.”

Not every battleground state is predicting a November slog.

“We fully expect to be reporting our unofficial results on election night, as we have in the past,” said Karen Brinson Bell, the executive director of the North Carolina board of elections. Her state, unlike some other battlegrounds, allows election officials to open and process ballots before Election Day. State lawmakers just extended that processing period by two weeks, she noted.

Brian Corley, the supervisor of elections in Pasco County, one of the quintessential swing counties of Florida, said his state had similarly expanded its period to process mail-in ballots. But he said exactly how long it would take to declare a winner would depend on how close the race ends up being in a state that famously decided the 2000 election by 537 votes after a recount and a United States Supreme Court decision.

Mr. Corley said the 2020 wait could be measured in days, not hours.

“Elections are a lot like Thanksgiving,” he said. “You’re finishing the turkey but still have to dole out the leftovers.”