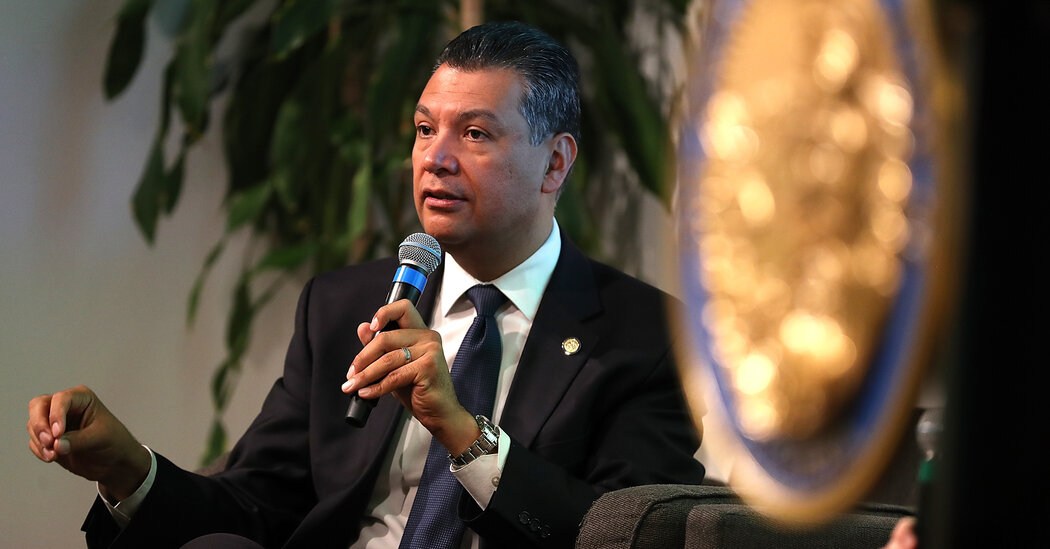 LOS ANGELES — As Kamala Harris steps into her role as vice president and out of her Senate office this week, the Democrat Alex Padilla will become the first Latino senator from California, a state where Latino residents make up 40 percent of the population, and will be one of six in the Senate. Mr. Padilla, who has been California’s secretary of state since 2015, is heading to Washington at a time when the country — and California — is deeply mired in the pandemic and a sluggish vaccine rollout. His own political career began with immigration activism, and he believes that the country needs a pathway to citizenship for all undocumented immigrants. He said he was confident that the Senate would be able to focus on an impeachment trial and the pressing need to get the pandemic under control — “we will walk and chew gum at the same time.”

These are lightly edited excerpts from the conversation.

California is roughly 40 percent Latino, yet you’re the first Latino senator from the state. Why do you think that took so long? What does it say about California and the political influence of Latinos?

I don’t know if I have a 170-year answer to that question, but it’s a big moment for the Latino community in California. I’m sure there’s a lot of researchers and academics with various theories. I just know that it has just added to the sense of urgency with which I’m prepared to tackle the job.

A lot of big issues need attention — increasing access to health care, combating climate change, a comprehensive immigration reform, closing the education gap. But for the time being, it’s all through the lens of Covid, in recognition of the devastation the damage has caused for far too many families, far too many communities, especially Latino communities and other communities of color.

That’s a great example of the people who say, well, you know, don’t take stuff too personally. Well, I can’t help but take it personally. My dad lives there and we’ve managed to keep him safe and healthy since March. But I think about his safety every single day.

I just wish so many more governors had taken the bold, aggressive action that our governor did. We were able to keep the numbers relatively lower per capita for a good chunk of 2020, compared to other states, including neighboring Arizona.

Here’s what breaks my heart. You know you catch the morning news and hear about record Dow Jones. But if you go to the Covid testing sites or the food banks, you see longer and longer lines. That contrast is heartbreaking.

I know Gov. Gavin Newsom is a longtime ally and he just appointed you. But given the infection rates here, and the slow vaccine rollout, it seems like a strange time to praise him. Do you really think he’s doing a good job right now?

I think he’s been dealt a tough hand by the Trump administration. Clearly there will be a next phase of the vaccine, but it’s really hard to plan for the next phase of the vaccine rollout when you don’t know when the next batch of vaccines are coming. I know Donald Trump is not up for this. His failure or refusal to lead from Day 1 of the pandemic is what has caused this mess across the country.

Democrats are going to have an extremely packed agenda — do you think impeachment will impede on that? Do you want to see a trial in the Senate?

So there’s no question in your mind you want to see action on that?

Absolutely. And as I talk to more and more of my colleagues to be, I hear loud and clear as we can and we will walk and chew gum at the same time. We have to.

Your own political career came out of your immigration activism. I’ve talked to a lot of current immigration activists who are very skeptical about whether the Biden administration will make the kinds of sweeping changes they want to see. Do you share any of that skepticism?

No state has more at stake in that debate than this one. Look, I am optimistic, but I know full well that it’s going to take a lot of work and I’m eager to get to that work. I think we need normalization and a pathway to citizenship for all undocumented immigrants in the nation. A good chunk of the essential work force that we’ve been praising since the beginning of the pandemic is undocumented. It is not enough to just reverse executive orders signed by Donald Trump. We have to go beyond that and actually provide the comprehensive immigration reform. So it may be hard, but I know it’s possible we have to rebuild the asylum system at the border, among other things. Let’s tackle the wait times of the naturalization process for eligible citizens today.

How worried are you about the future of elections? Do the doubts that the president and other Republicans have sowed undermine democracy?

The doubt is a huge danger and it’s not just a potential danger. We saw the fatal consequences of having a conspiracy theorist with a bullhorn sitting in the Oval Office. Buteven with the departure of Trump, we have a lot of work to do before the next election. Misinformation, disinformation is extremely dangerous. We’re already seeing it play out in vaccine distribution and lack of confidence in certain communities of the vaccine and therefore an unwillingness maybe to take it sooner rather than later.

President-elect Joseph R. Biden Jr. campaigned on unity, and I expect that will be a theme of his speech on Wednesday. How optimistic are you or not that unity is something that can happen in our country, given the last four years and the last few weeks?

Unity is very, very much a value. You know, we’re not going to reach utopia in one day or one week or even one year. But it’s going to be something that we strive for. I hope it manifests itself in the working environment in the halls of Congress. But it’s also important to happen in living rooms and eventually diners and barbershops across America.

I certainly hope so. Look it, we’ve got to think big. That’s going to be my sentiment. Even without the pandemic of this last year, in addition to the health and economic devastation that Covid has wreaked on a lot of communities, it’s also exacerbated a lot of the underlying disparities, which really need to be addressed. Education, for example, with so many young people learning, trying to learn remotely, it’s brought back concerns about the digital divide, whether it’s with access to broadband or digital literacy, even the affordability of devices. So there was an education gap prior to the pandemic and evidence shows that it’s exacerbated by the pandemic. That’s just one example.

Where do you put yourself on the political spectrum? Do you expect to be sort of on the more progressive end of the caucus, or do you consider yourself a moderate?

I’m eager to arrive in the Senate and begin pushing the envelope.