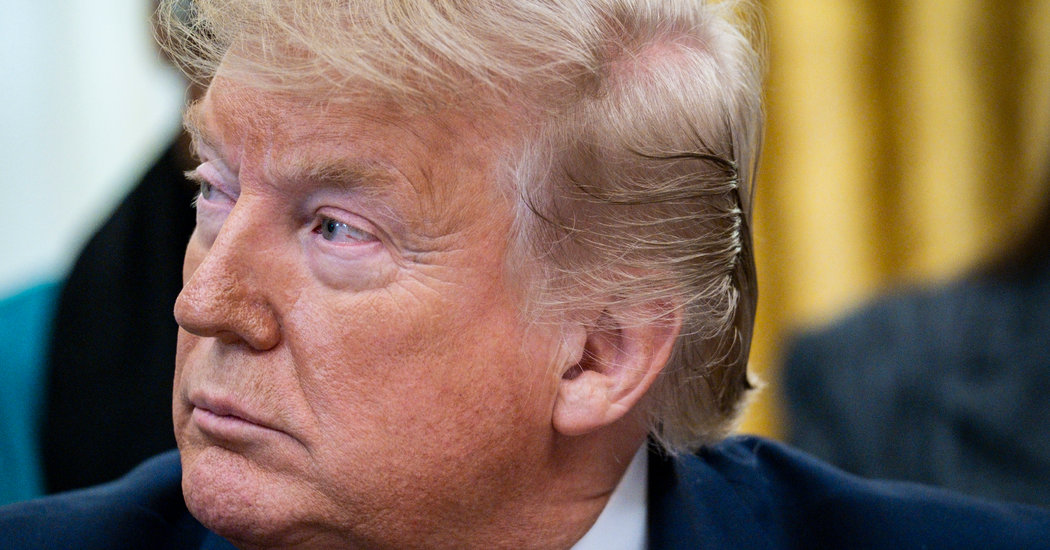 WASHINGTON — Shortly after 2 p.m. on Thursday, Senator Charles E. Grassley of Iowa administered the oath to Chief Justice John G. Roberts Jr. in the well of the Senate, asking him to swear “that in all things appertaining to the trial of the impeachment of Donald John Trump, president of the United States,” he would deliver impartial justice.

At the White House at that precise moment, President Trump was scheduled to be hosting an event promoting the administration’s attempt to empower religious students to exercise their rights to pray at school. But for the next hour as, one by one, 99 senators signed the oath book, the president kept the students waiting. Finally, he allowed reporters into the Oval Office, where he sat behind the Resolute Desk and took their questions.

The day before, Mr. Trump had presided over a celebration of a trade deal with China, calling out some of the nation’s biggest corporate leaders as if they were his golf buddies. Earlier Thursday, the Senate had given final approval to the United States-Mexico-Canada Agreement. Now he had to talk about the attempt to remove him from office.

“I did the biggest deal ever done in the history of our country yesterday in terms of trade,” he said, referring to (and exaggerating the size of) the China deal, “and that was the second story to a total hoax. Today, we just had passed the U.S.M.C.A. It’s going to take the place of NAFTA, which was a terrible deal, and the U.S.M.C.A. will probably be second to this witch hunt hoax, which hopefully everyone knows is not going anywhere.”

The president claimed that he did not know Lev Parnas, an associate of his personal lawyer Rudolph W. Giuliani who said in interviews this week that the president knew everything about the effort to push Ukraine to investigate former Vice President Joseph R. Biden Jr. and his son, as well as the 2016 election, the reason for his impeachment.

He described Representative Adam B. Schiff of California, the Intelligence Committee chairman who had read the articles of impeachment to the assembled Senate, as “a corrupt person. He’s a corrupt politician.”

He said the entire impeachment inquiry was “a hoax,” adding, “Everybody knows that.”

Referring to a July phone call he had with the president of Ukraine that helped touch off the impeachment inquiry, he said Democrats “picked up a phone call that was perfect, but they didn’t know it was perfect.”

And then, minutes after dismissing the reporters from the Oval Office, Mr. Trump issued the Twitter version of a shout.

“I JUST GOT IMPEACHED FOR MAKING A PERFECT PHONE CALL!” he wrote.

The all-caps tweet only underscored how Mr. Trump has become increasingly unnerved by the prospect of a Senate trial, even one in which his Republican allies are widely expected to acquit him. And by the few times the president did anything in public on Thursday, it was clear he was looking for ways to do something about it.

On Twitter, he gave an unusual plug to Senator Lamar Alexander, a Tennessee Republican who is retiring at the end of the year and has said he may vote to hear from more witnesses during the Senate impeachment trial.

Mr. Trump appeared to offer his conditional support for a bill introduced by Mr. Alexander that would award the Congressional Gold Medal to a Tennessee native, Master Sgt. Roddie Edmonds, an American prisoner of war who helped save Jewish lives during World War II. “Looking at this strongly!” the president tweeted.

Democrats need four Republican votes to force the Senate to subpoena witnesses like John R. Bolton, the former White House national security adviser, to testify, and Mr. Alexander is one of four who have signaled a potential openness to breaking ranks.

The president’s school prayer event appeared to be a direct appeal to the evangelical Christians who are an important part of his political base.

There was very little new to announce, and the American Civil Liberties Union called the guidance issued Thursday a “copycat document” almost identical to one released by the George W. Bush administration in 2003, which reinforces existing legal parameters for schools that receive federal funding to allow students to pray individually and in groups. But Mr. Trump framed the new guidelines as a landmark, saying that there was a “growing totalitarian impulse on the far left that seeks to punish, restrict and even prohibit religious expression” and said that the new guidance ensures the “right to pray.”

The president capped his day with a meeting with several campaign aides, where he grilled them on how voters were receiving impeachment.

In his conversations with advisers on Thursday, Mr. Trump repeated once again that he could not believe he was facing such a predicament as impeachment. He said he wanted people to be prepared for a motion to dismiss and has hoped for one, even though Senator Mitch McConnell of Kentucky, the majority leader, has said the Senate will have to take up the matter.

At different times, Mr. Trump has also told aides he wants the opportunity to call witnesses he believes could help him politically, like Hunter Biden, Mr. Biden’s son, as well as the whistle-blower, a C.I.A. officer who first alerted the Intelligence Committee to Mr. Trump’s pressure campaign on the Ukrainian government.

Mr. Trump, always concerned about optics and how things play, has also expressed reservations about whether his lawyers will be aggressive enough during the televised Senate trial.

Mr. McConnell has advised the president that the best trial is a short one and that witnesses can only create more unknowns.

On a conference call with reporters on Wednesday, senior Trump officials said it would be extraordinarily unlikely for a trial to take longer than a few weeks, calling theirs an easy case, even as new details about Mr. Trump’s efforts to pressure Ukraine have continued to come out.

In a meeting with conservative leaders at the White House the same day, two officials who have become the public face of the White House impeachment response, Tony Sayegh and Pam Bondi, said much the same thing.

Mr. Trump’s re-election campaign, meanwhile, used the events of the day as a fund-raising opportunity, directing voters through targeted digital ads to an “official impeachment defense fund,” which acted as a portal to the campaign’s website.

The message delivered from Mr. Trump online was simple: “FIGHT BACK.”

Liam Neeson: I’m retiring from ass-kicking before I need a walker

Jerry Springer Just Weighed in on the Replacing Kim Cattrall in Sex and the...

News DSMW - January 15, 2021
0
Judge Jerry Springer presiding. Yes, you read that right. Daily Pop's set was transformed into a courtroom on Friday, Jan. 15, allowing the former host of The Jerry Springer Show to... ...

News DSMW - January 15, 2021
0
Kristin Cavallari has a word for her critics. During a virtual interview on Good Morning America the Very Cavallari star addressed the recent remarks surrounding her parenting skills.... ...

News DSMW - January 15, 2021
0
New York Democratic Gov. Andrew Cuomo — whose state has been one of the hardest hit by the coronavirus pandemic and whose stringent lockdown orders have stifled countless small businesses — announced plans this week to revive New York's economy through celebrity pop-up performances."We must bring arts and culture back to life," Cuomo said in announcing the forthcoming "New York Arts Revival," a public-private initiative that will kick off in February and feature performances from more...
MORE STORIES

Jerry Springer Just Weighed in on the Replacing Kim Cattrall in...