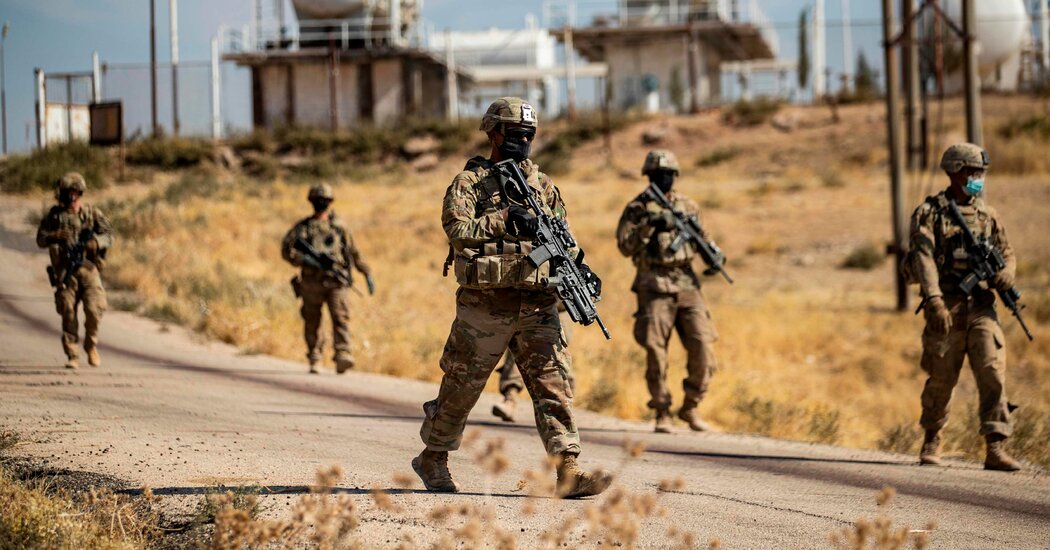 WASHINGTON — The Pentagon policy official overseeing the military’s efforts to combat the Islamic State was fired on Monday after a White House official told him the United States had won that war and that his office had been disbanded, according to three people briefed on the matter.

The ouster of the official, Christopher P. Maier, the head of the Pentagon’s Defeat ISIS Task Force since March 2017, came just three weeks after President Trump fired Defense Secretary Mark T. Esper and three other Pentagon officials, and replaced them with loyalists.

In a statement late Monday, the Pentagon said that Acting Defense Secretary Christopher C. Miller had accepted Mr. Maier’s resignation and that his duties would be folded into two other offices that deal with special operations and regional policies. Those offices are led by Ezra Cohen-Watnick and Anthony J. Tata, two of the Trump appointees who have been promoted in the recent purge.

The Pentagon statement said the transition reflected the success of the U.S.-led effort to crush the terrorist state that ISIS created in large swaths of Iraq and Syria.

But Mr. Maier’s supporters say he was summarily forced out of an important but low-profile job that required navigating the shoals of Washington’s counterterrorism bureaucracy as well as flying off to combat zones, including northeast Syria to work with precarious partners on the ground in the fight against the Islamic State.

“Chris is a nonpartisan professional and carries years of institutional knowledge on an exceedingly complex set of issues,” Brett H. McGurk, Mr. Trump’s former special envoy to the coalition to defeat the Islamic State, said in an email. “It really makes no sense to force out someone like that 50 days before a transition to a new administration.”

The Pentagon statement said Mr. Miller thanked Mr. Maier for his service. But a senior U.S. official said relations were strained between Mr. Maier and Mr. Miller, a former Army Green Beret who later served in counterterrorism jobs at the Pentagon and the White House’s National Security Council before Mr. Trump picked him to replace Mr. Esper in the Pentagon’s top civilian job.

Mr. Maier, 44, an Air National Guard intelligence officer who has worked in counterterrorism jobs in Republican and Democratic administrations for nearly two decades, declined to comment. His firing was reported earlier by CNN.

While Mr. Maier’s backers expressed dismay at the manner of his dismissal — summoned on Monday by a White House liaison officer at the Pentagon and told to clear out that day — they also criticized the new Defense Department leadership for playing to Mr. Trump’s overly optimistic assessment of the Islamic State’s status. The officials spoke on condition of anonymity because they were not authorized to publicly discuss the situation.

When Mr. Miller announced last month that the United States would draw down to 2,500 troops in both Iraq and Afghanistan by Jan. 15, he trumpeted the demise of the Islamic State. “Thanks to our more than 80 partners in the Defeat-ISIS Coalition, we have destroyed the ISIS caliphate and will ensure they never again gain a foothold to attack our people,” Mr. Miller said in remarks on Nov. 17.

But two months earlier, in late September, while still in his previous job as director of the National Counterterrorism Center, Mr. Miller struck a more sobering note in testimony to a House committee: “ISIS has repeatedly demonstrated the ability to rebound from severe losses over the past six years by relying on a dedicated cadre of veteran midlevel commanders, extensive clandestine networks, and downturns in CT pressure to persevere,” referring to counterterrorism pressure.

Other counterterrorism officials estimate that the Islamic State, despite having lost its territorial control in Iraq and Syria, still has as many as 10,000 guerrilla fighters there, and maintains resilient affiliates across East and West Africa and Afghanistan.

“Chris is a straight-up pro,” Nicholas J. Rasmussen, a former director of the National Counterterrorism Center, said of Mr. Maier. “The idea this is justified because we’ve won the war against ISIS strains credulity.”

Pentagon officials insist they are not taking ISIS lightly, but that the moment was right to reorganize the department’s counterterrorism policy efforts. The disbanding of Mr. Maier’s office and his 15 or so staff members follows a similar consolidation at the State Department, where the counter-ISIS duties carried out by James Jeffrey were transferred to the department’s permanent counterterrorism coordinator when Mr. Jeffrey retired last month.

“The Department of Defense will continue to engage with our partners and allies to ensure the lasting defeat of ISIS and encourage the repatriation of foreign terrorist fighters for prosecution,” said the Pentagon statement.