President Donald Trump’s election night party last Wednesday – at which he falsely  declared himself the victor of the presidential election – is shaping up to be another super-spreader event as an expanding group of attendees reportedly test positive for coronavirus. 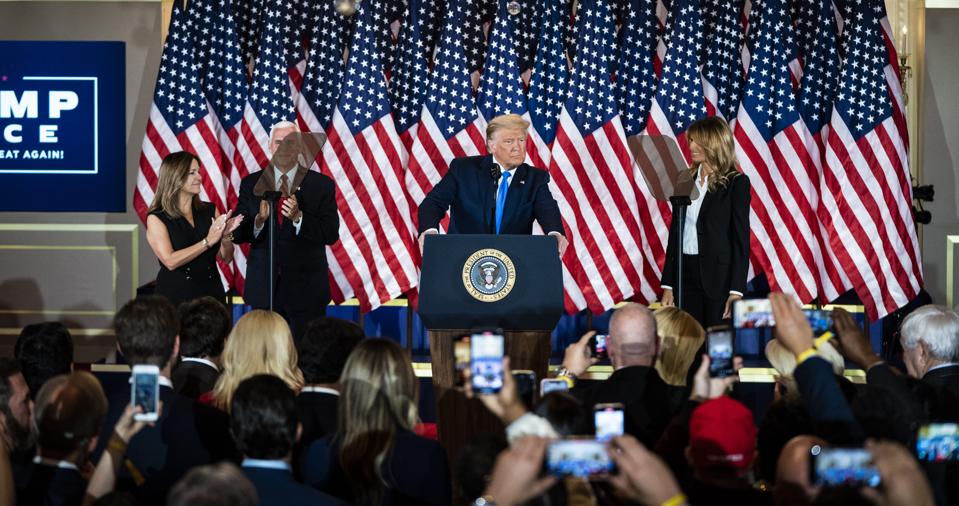 White House political director Brian Jack and another staffer in the White House’s political affairs office tested positive for the virus, according to reports from the New York Times and Bloomberg.

Also testing positive is Healy Baumgardner, a former Trump campaign aide and private equity adviser who attended the party as a guest of Trump’s personal attorney Rudy Giuliani, according to Bloomberg, NBC News and CBS News.

The reported infections come after Housing and Urban Development Secretary Ben Carson and Trump campaign adviser David Bossie, both of whom attended the party, also tested positive for the virus.

Chief of Staff Mark Meadows, who was seen in photos and videos of the party without a mask, was the first attendee of the party whose positive test came to light after it was reported by Bloomberg on Friday, with CNN reporting he sought to keep it a secret.

The White House declined to comment on the cases to Forbes.

The recent outbreak resembles another White House outbreak in early October connected to Amy Coney Barrett’s nomination ceremony at the White House Rose Garden. The event, at which Trump and many other attendees were photographed in close contact without masks, has been dubbed a “superspreader event” by many experts, including Dr. Anthony Fauci, the nation’s top infectious disease officials.

41. That’s the minimum number of people connected to the White House who have tested positive for coronavirus. The group includes President Trump, the first lady and their son Barron, as well as Press Secretary Kayleigh McEnany and several aides to Vice President Mike Pence.

“I talked to several aides last Tuesday who were worried the event would become a super spreader and felt pressured to go to save face,” tweeted PBS News White House correspondent Yamiche Alcindor.