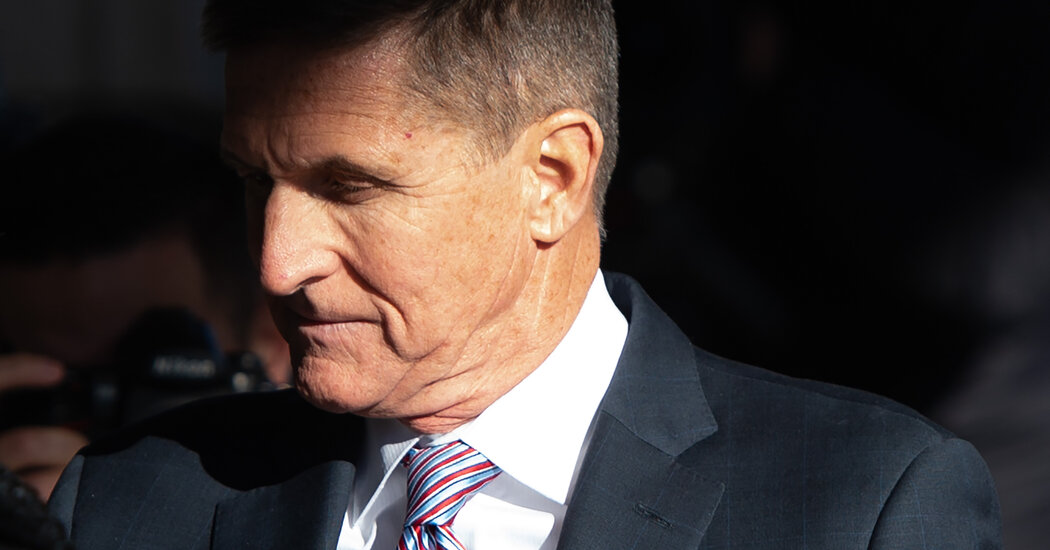 WASHINGTON — The entire Federal Appeals Court in Washington said on Thursday that it would take up a case involving Attorney General William P. Barr’s decision to drop the prosecution of President Trump’s former national security adviser Michael T. Flynn, erasing a split decision by a three-judge panel in June ordering an immediate end to the case.

A terse order from the Court of Appeals for the District of Columbia Circuit said that a majority of its members had voted to vacate a June 24 panel decision ordering the immediate dismissal of the case against Mr. Flynn, and set oral arguments before the full court for Aug. 11.

The move meant that the legal and political saga over Mr. Flynn’s case would continue. Mr. Barr’s intervention in the case came after an extraordinary public campaign by Mr. Trump and his allies, prompting accusations that the attorney general had ended the prosecution of a presidential favorite for illegitimate political reasons.

The trial judge overseeing the matter, Emmet G. Sullivan, decided to scrutinize the legitimacy of that request, appointing an outside critic who portrayed Mr. Barr’s move as corrupt and urged the sentencing of Mr. Flynn, who has twice pleaded guilty to lying to F.B.I. agents about conversations with a Russian ambassador. But before the judge could hold a hearing, Mr. Flynn’s legal team persuaded two of three judges on an appeals court panel to order the judge to dismiss the charges without further review.

That panel ruling was a surprise, and both of the judges in the majority — Neomi Rao, a former Trump White House official, and Karen L. Henderson, a George Bush appointee, have been more willing in other cases than most of their colleagues to interpret the law in Mr. Trump’s favor.

A chief argument against their intervention was that the situation did not qualify for the extraordinary remedy of an immediate order to the trial judge — a so-called writ of mandamus — because an alternative was available: Judge Sullivan could be permitted to make his decision in the normal course, and if Mr. Flynn did not like it, he could file an appeal.

The unsigned order from the full court signaled that the majority of the judges who wanted to rehear the matter may be focused on that argument. It stated: “The parties should be prepared to address whether there are ‘no other adequate means to attain the relief’ desired.”

Mr. Flynn, a former Army lieutenant general, had been a top aide to Mr. Trump during the 2016 campaign and was set to become his national security adviser during the transition after the election when he had several phone calls with the Russian ambassador to the United States at the time, Sergey I. Kislyak.

The calls were picked up on a wiretap targeting Mr. Kislyak, and in the following weeks, it became clear that Mr. Flynn was lying to his colleagues in the incoming administration about what was said — including that he had asked the Russian government not to escalate in response to sanctions imposed by the Obama administration for its 2016 election interference, suggesting that the incoming Trump administration could work with Moscow.

Because of Mr. Flynn’s prior ties to Russian officials, F.B.I. agents had been scrutinizing him as part of the early stage of the investigation into Russia’s election meddling and whether any Trump campaign associates had conspired in that interference. But the bureau had decided to close its file on Mr. Flynn when his calls with the ambassador and his lies to his colleagues about them raised a new reason to be suspicious.

The F.B.I. decided to question Mr. Flynn about the calls to see what he would say, and on Jan. 24, 2017, as the national security adviser to the newly installed President Trump, Mr. Flynn provided to two agents a false description of his calls. Soon after, Mr. Trump ousted him, saying it was because he had lied to Vice President Mike Pence about the calls.

The office of Robert S. Mueller III, the special counsel later appointed to lead the Trump-Russia investigation, eventually struck a deal with Mr. Flynn’s original legal team under which he would cooperate and plead guilty to one count of making a false statement to resolve his legal liability both for that interview and for failing to register as a paid foreign agent of Turkey in 2016 and then signing forms in 2017 lying about the nature of that work.

But over time, Mr. Flynn’s case started to become a political cause for Mr. Trump and his supporters. Last year, Mr. Flynn changed legal teams and ceased cooperating with the Justice Department, and this year, he sought to withdraw his guilty plea. Mr. Barr then directed prosecutors to ask the judge to dismiss the case rather than sentence him.

Mr. Flynn’s new defense lawyer, Sidney Powell, had privately lobbied Mr. Barr to appoint an outsider to scour the case file for material that could be used to accuse investigators and prosecutors of misconduct, engineering a similar outcome to the department’s 2009 dismissal of a corruption case against a senator after his conviction.

Mr. Barr did so, and the department has turned over to the defense files showing that the F.B.I. was aggressive when it interviewed him, violating bureaucratic protocol by unilaterally sending agents to talk to him even though there were unresolved deliberations with Justice Department leaders about how to do so and whether to alert the White House counsel.

Among other things, the department also disclosed that the F.B.I. had decided to close the inquiry into Mr. Flynn before the issue of his calls and his lies to colleagues about them arose. Because the file was still open, however, the F.B.I. used it to question him.

Mr. Barr’s Justice Department, while not embracing Ms. Powell’s accusations that prosecutors committed misconduct, argued that the uncertain status of the Flynn inquiry at the time agents questioned him meant that Mr. Flynn’s lies were not a crime because they were not connected to a legitimate investigation.

In June, John Gleeson, a former mafia prosecutor and retired judge appointed by Judge Sullivan to critique the government’s arguments, filed a scathing brief contending that prosecutors’ rationale made no sense and must be cover for a corrupt and politically motivated decision. The Justice Department disputed that idea.

It has not been clear whether Judge Sullivan agrees. He had been set to hold a hearing on the matter before the appeals court panel voted last month to hold that he had no authority to scrutinize the basis for Mr. Barr’s decision. The dissenting judge on the panel accused his colleagues of “grievously” overstepping their authority, and Judge Sullivan appealed.