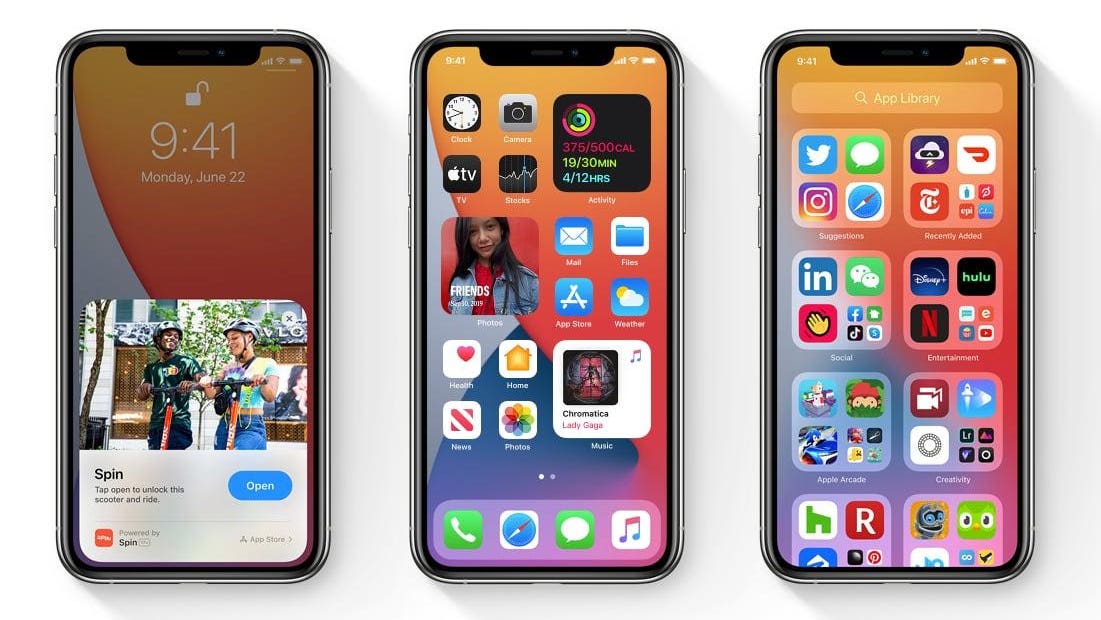 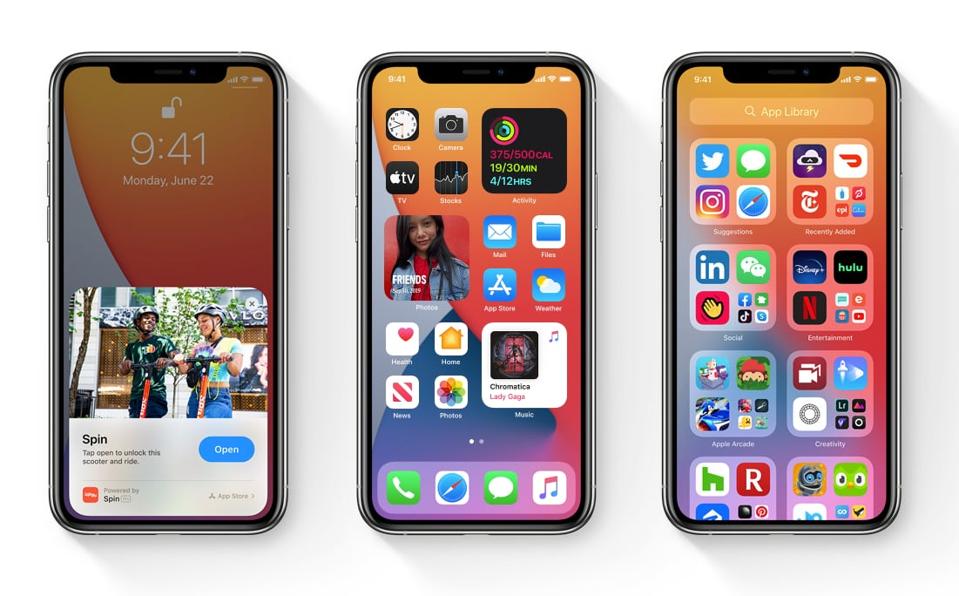 That tremor in the Force you felt yesterday probably wasn’t shock at being able to text your car keys in Apple’s new iOS 14 or do real-time offline translation with Siri. Instead, it was Apple’s shot across the bow of an $80 billion industry.

The IDFA is dead.

Yesterday Apple announced iOS 14, its new mobile operating system for iPhones and iPads. The company did not announce, as mobile marketers expected, the death of the IDFA.

Instead, Apple essentially castrated the Identifier for Advertisers. Neutered it. Rendered it basically useless without actually killing it. 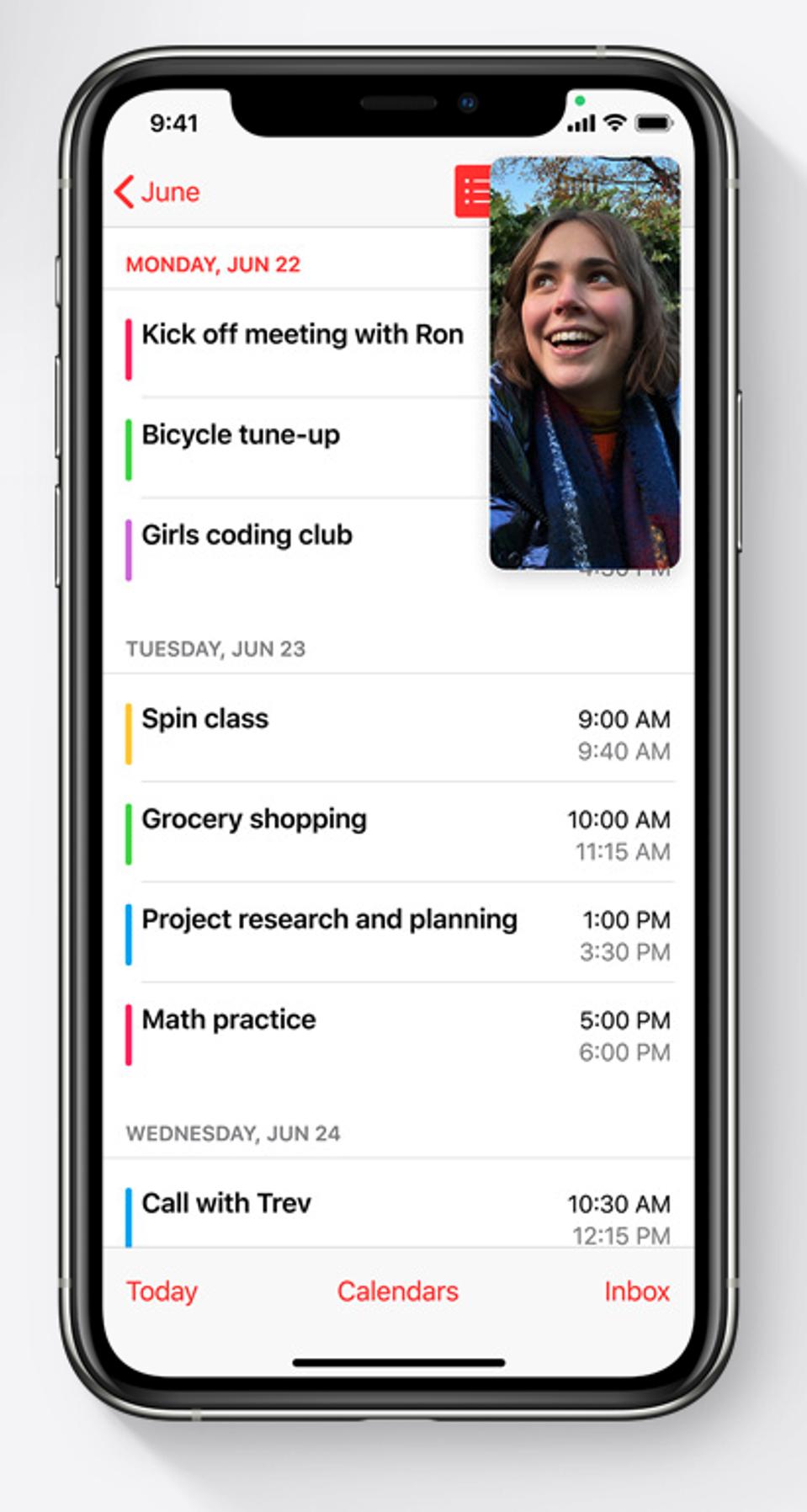 A screenshot of one of Apple’s new iOS 14 features: picture in picture video.

Like Google’s advertising identifier, GAID, Apple’s Identifier for Advertisers helps mobile marketers attribute ad spend. What that means, essentially, is that when a company like Lyft or Kabaam runs user acquisition campaigns to gain new mobile customers, a mobile measurement partner like Adjust, Singular, Kochava, or AppsFlyer can help them connect a click on an ad with an eventual app install on a specific device. (Full disclosure: I do some consulting for Singular.) That helps Lyft know that an ad worked, and that whatever ad network they used for it succeeded.

Plus, if the person who installed that app eventually signs up for an account and takes a ride share, Lyft knows where and how to attribute the results of that marketing effort, and connect it to the ad spend that initiated it. Even better, from Lyft’s perspective, it can use the IDFA to tell mobile ad networks essentially: I like users like this; go find me more.

All of that is going away with iOS 14.

Yesterday Apple killed the IDFA without killing the IDFA, by taking it out of the depths of the Settings app where almost no-one could find it — although increasingly people were finding it and turning it off — and making it explicitly opt-in for every single app. If an app wants to use the IDFA, iOS 14 will present mobile users with a big scary dialog like this: 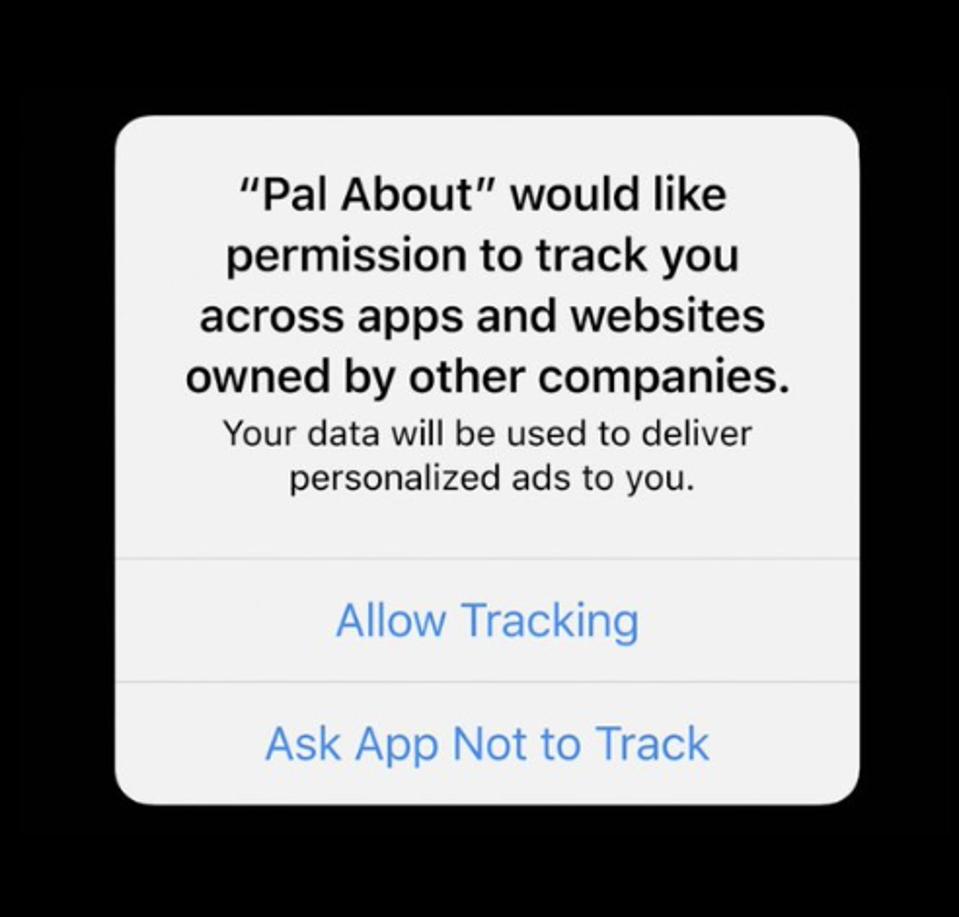 The new user permission dialog in iOS 14 from Apple that allows or denies advertiser access to the … [+] IDFA (identifier for advertisers).

Would you say “yes” to allowing an app or brand permission to “track you across apps and websites owned by other companies?”

Neither will 99% of consumers.

This is actually a genius move by Apple. Marketers can’t really get upset about losing the IDFA capability, because technically it’s still around. Apple gets to burnish its privacy credentials while not taking huge amounts of flack from brands and advertisers because, after all, who can argue with giving people more rights with their personal data?

And make no mistake: this is a great move for user privacy.

But it’s also a huge problem for a massive industry.

AppsFlyer estimates mobile app install spend at close to $80 billion in 2020, and that estimate was made before COVID-19 threw mobile into high gear for the gaming industry — one of the biggest spenders in the mobile user acquisition space — so it could be low. And while Android accounts for more than twice as many app installs as iOS — 22.5 billion in Q1 2020 versus 9 billion, according to App Annie — the numbers are almost reversed when it comes to spend per platform. 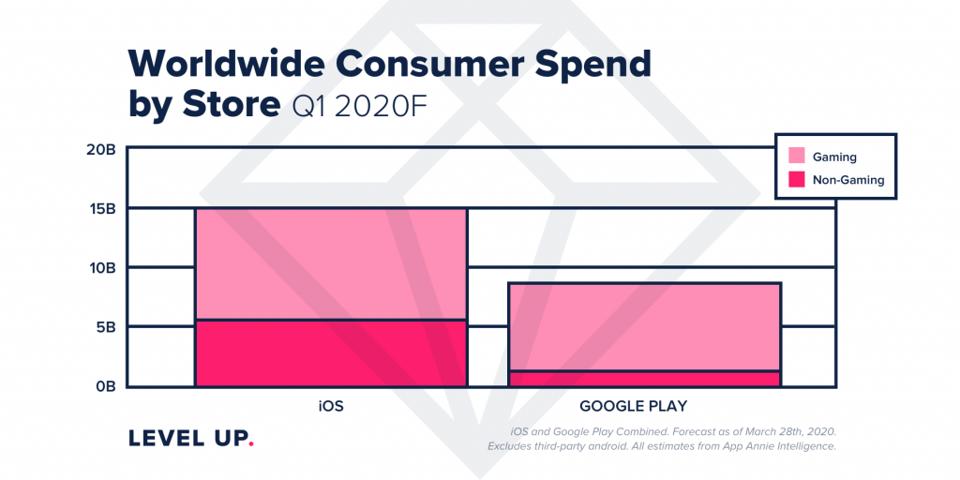 Spend on iOS and Android on in-app purchases, according to App Annie, in Q1 of 2020.

That means iOS users are close to twice as valuable to advertisers and publishers compared to Android users. And that means that iOS accounts for a disproportionate share of that almost $80 billion in user acquisition spend. We are talking tens of billion of dollars here, most of which Facebook and Google hoover up into their ad ecosystems.

Now big chunks of those billions are at risk.

Not that advertisers won’t still need to advertise. And not that they’ll completely stop. But it will be harder to advertise if they don’t believe they can effectively measure the results of their ads. 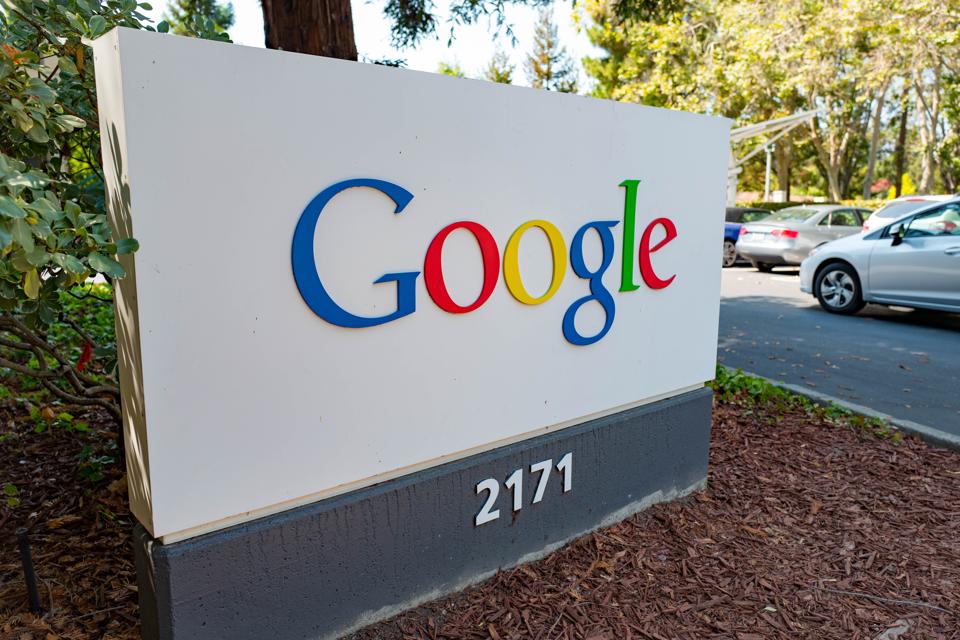 Perhaps most critically, this impacts spend on the two biggest platforms for mobile user acquisition: Google and Facebook. Google and Facebook are perennially at the top of charts for highest return on ad spend for a reason: they typically have more data on more people to make smarter decisions about ad targeting, plus more opportunities to show those ads in high-value contexts.

Now they’re facing some risk to that privileged position.

Two of the ways that Facebook enables smart mobile user acquisition for mobile brands are App Event Optimization (AEO) and Value Optimization (VO). AEO looks for new-to-you people who are similar to customers you already have in your apps at defined stages, while VO looks for people who will spend a certain amount of money in your mobile app. It’s going to be a lot harder for Facebook to run these types of campaigns if Apple refuses to let Facebook know what people do in an app after they install it.

Facebook might be able to do it if the Facebook mobile software development kit is installed in an app’s code, for instance. The Facebook SDK is currently in over 80,000 iOS apps, according to MightySignal, including just over half of the top 200 biggest iOS apps on the planet. 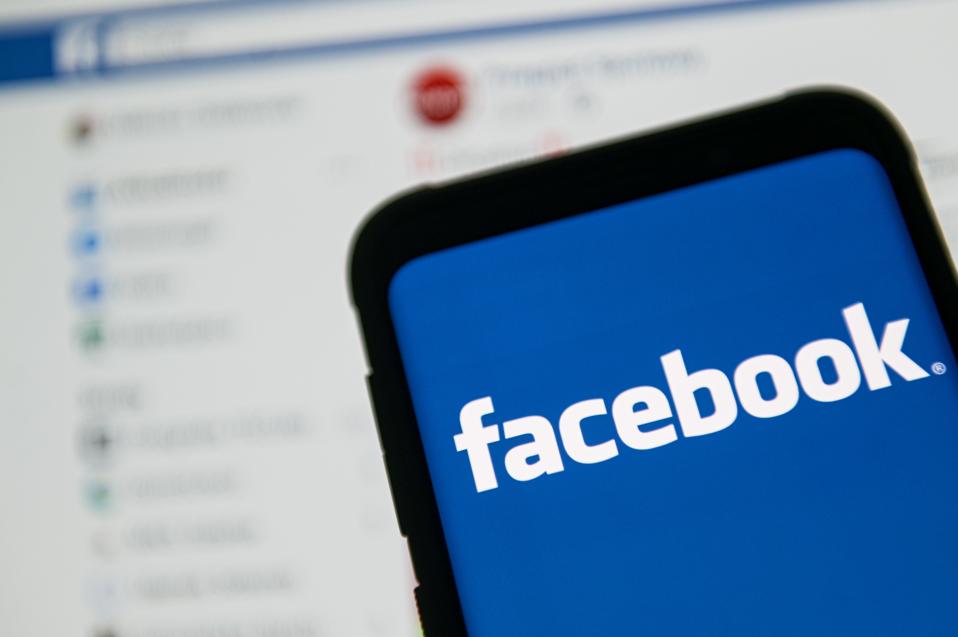 How Apple would react to that is anybody’s guess, but given that Apple has rejected Facebook’s social gaming app at least five times already, it probably won’t be good.

Similarly, Google Ads can be set to find new users for your mobile app based on “tROAS,” or target return on ad spend. To know that its ads are working, Google needs post-install data from users you acquire via Google Ads: data which will be harder to get now, if not impossible. Like Facebook, Google has its own SDK in many mobile apps — 69% of the top 200 grossing iOS apps, and over 115,000 iOS apps in total — so it may be able to get data that way.

And, just because Facebook or Google have their SDKs in a lot of apps doesn’t mean their software is in every app … so there’s a potential barrier to using their mobile user acquisition services for mobile apps at the current level of sophistication coming in the not-to-distant future.

Apple isn’t just completely leaving advertisers up the creek without a paddle, however. After all, the company makes billion annually with its own ad network, Apple Search Ads, which is completely focused on mobile user acquisition on the iOS App Store.

So Apple has been working on a new privacy-safe framework for mobile attribution — the science of identifying which ads drive what results — for the past two years. It’s called SKAdNetwork, and Apple just updated it. 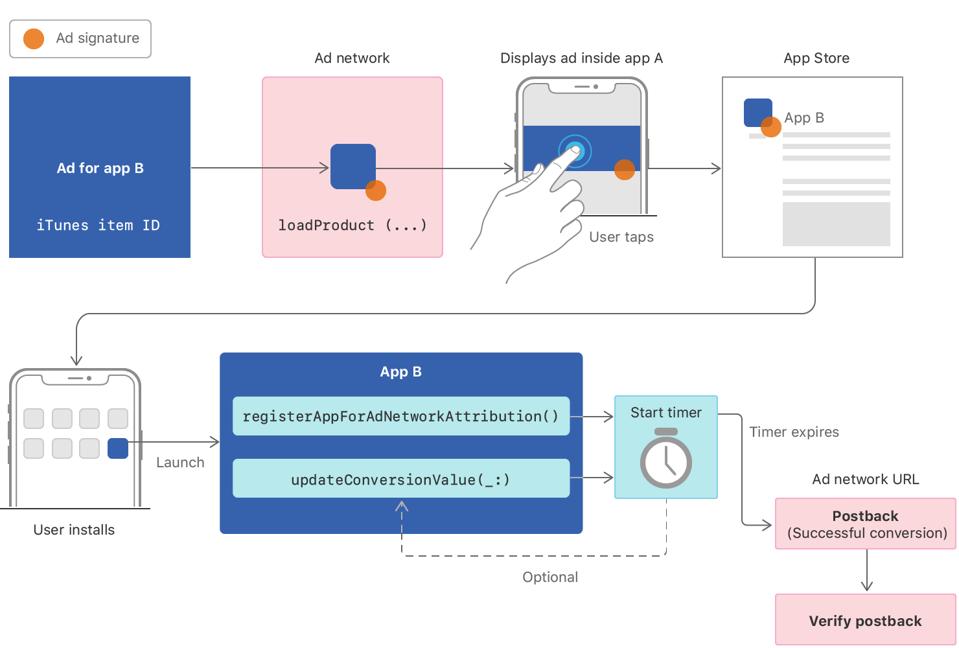 So, again, you’re a mobile brand and you want users. It’s October 2020, and 70% or more of iOS users are now on iOS 14. You go to an ad network like Vungle or AdColony or Chartboost — or Facebook or Google, for that matter — and kick off an ad campaign. They show your ads to potential new mobile customers, and when one clicks on it and downloads your app from the App Store, Apple itself will handle sending a cryptographically signed notification — a postback — to the ad network. That postback will not include any user or device-specific information, so while it will validate the conversion for marketing purposes, it won’t reveal any personal information of your new app user.

Google and Facebook are now just like any other ad network: lining up to get a smidgen of privacy-safe information from Apple.

Brands have until September to get ready to be able to measure the results of their mobile ad campaigns in this new way. Mobile measurement vendors are planning to help, of course.

Adjust CTO Paul Muller said today that “we will continue to enable our clients to not only view their data for all their campaigns across both iOS and Android, but also to ensure that this data is actionable.”

Singular CEO Gadi Eliashiv has already announced “first-to-market” SKAdNetwork support, saying the company’s technology will make it “scalable, simple, and seamless for mobile marketers,” and that Singular has been working on supporting SKAdNetwork for “over a year now.”

Other mobile measurement vendors will no doubt follow suit.

The most interesting thing over the next days and weeks, however, will be how Facebook and Google react to Apple’s announcement. SKAdNetwork has the potential to make their cozy user acquisition advantages somewhat less advantageous. But they also have vast resources and huge amounts of data on billions of people.

We live in interesting times!