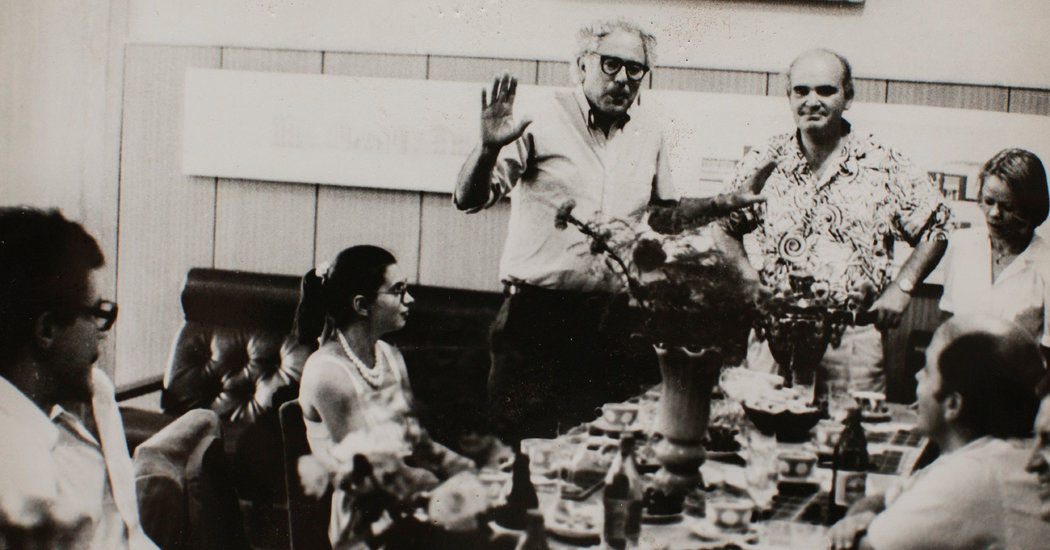 YAROSLAVL, Russia — The mayor of Burlington, Vt., wrote to a Soviet counterpart in a provincial city that he wanted the United States and the Soviet Union to “live together as friends.”

Unbeknown to him, his desire for friendship meshed with the efforts of Soviet officials in Moscow to “reveal American imperialism as the main source of the danger of war.”

That mayor was Bernie Sanders, and the story of his 1988 trip to the Soviet Union has been told before. But many of the details of Mr. Sanders’s Cold War diplomacy before and after that visit — and the Soviet effort to exploit Mr. Sanders’s antiwar agenda for their own propaganda purposes — have largely remained out of sight.

The New York Times examined 89 pages of letters, telegrams and internal Soviet government documents revealing in far greater detail the extent of Mr. Sanders’s personal effort to establish ties between his city and a country many Americans then still considered an enemy despite the reforms being initiated at the time under Mikhail S. Gorbachev, the Soviet general secretary.

They also show how the Kremlin viewed these sister city relationships as vehicles to sway American public opinion about the Soviet Union.

“One of the most useful channels, in practice, for actively carrying out information-propaganda efforts has proved to be sister-city contact,” a Soviet Foreign Ministry document provided to Yaroslavl officials said.

The documents are part of a government archive in Yaroslavl, Russia, which became the sister city of Burlington. The files are open to the public, though archivists there said that, until now, no one had asked to see them.

Nothing in the documents suggests that Mr. Sanders was the only local American official targeted for propaganda, or even that he was particularly receptive to it, though they do describe him as a socialist. But the documents do show the Soviets’ intensive preparation to use Mr. Sanders’s interest in their country to their advantage.

The Sanders campaign didn’t dispute the documents’ authenticity; the English-language documents were shared with the campaign and the relevant Russian documents were described. At the time of Mr. Sanders’s announcement in 1987 that Burlington would seek a Soviet sister city, several dozen other American cities already had such a relationship or had applied for one.

The documents, available at the Yaroslavskaya Region State Archive in Yaroslavl, are included in a file titled “documents about the development of friendly relations of the city of Yaroslavl with the city of Burlington in 1988.”

In a statement, the Sanders campaign said the candidate was “proud” of his grass-roots diplomatic efforts and noted that the idea of bringing together Soviet and American cities had the highest-level support at the time.

“Mayor Sanders was proud to join dozens of American cities in seeking to end the Cold War through a Sister Cities program that was encouraged by President Reagan himself,” a Sanders campaign spokesman, Mike Casca, said in a statement. “The exchange between Burlington and Yaroslavl, which continues to this day, confirmed Sanders’s long held view: by meeting face to face, we can break down the barriers and stereotypes that exist between people and their governments.”

Mr. Sanders’s involvement in the Cold War debate grew in the 1980s as he forcefully opposed the Reagan administration’s plans to have Burlington and other American cities make evacuation plans for a potential nuclear war.

Instead, Mr. Sanders reached out to the Soviet Union via an organization based in Virginia, requesting a sister-city partnership with the Cold War adversary in an effort to end the threat of nuclear annihilation.

“We were saying: The goal is to not have a nuclear war, not to plan and prepare for it,” said Terry Bouricius, a Burlington alderman at the time who accompanied Mr. Sanders on the trip.

This was also the era of perestroika and glasnost, economic and cultural changes promoted by Mr. Gorbachev that had sparked optimism among some in the West — along with skepticism from many others — that the Kremlin was prepared to adopt a more conciliatory stance abroad and provide greater freedoms to its own people.

While Mr. Sanders has taken heat from President Trump and his campaign for this outreach to the Soviets, his supporters say it was a timely effort to help defuse tensions and stands in contrast to Mr. Trump’s affinity for strongman leaders like Russia’s current president, Vladimir V. Putin.

In December 1987, the records show, Mr. Sanders spoke by phone with Yuri Menshikov, the secretary of the Soviet sister-city organization in Moscow. In a follow-up letter later that month, Mr. Sanders said he had received word that Yaroslavl would be an ideal partner. He proposed leading a Burlington delegation to Yaroslavl to lay the foundation for a sister-city relationship.

He suggested arriving on May 9 — the day that the Soviet Union celebrated its victory over Nazi Germany — and said he was especially interested in discussing economic development, the police, winter street cleaning, libraries, and plumbing and sewer systems.

“We are living through an amazing time, and I believe I am lucky to play a role in such a time,” Mr. Sanders wrote, according to a Russian version of his letter.

The visit to Yaroslavl was eventually scheduled for early June, after Mr. Sanders’s 12-person delegation visited Moscow and Leningrad (now St. Petersburg). Mr. Sanders has referred to the trip as a “very strange honeymoon.” Just before leaving, he had married his longtime partner, Jane O’Meara Driscoll, the director of the Youth Office in Burlington City Hall, in a televised outdoor ceremony on the shore of Lake Champlain.

The delegation’s visit to Yaroslavl was planned minute-by-minute, with tours of schools and theaters and virtually no breaks during the day.

“Visits to Yaroslavl churches and a boat trip on the Volga proved especially memorable to the guests,” an internal Soviet report says.

But the trip wasn’t enough to cinch the sister-city relationship. Mr. Sanders still had to convince Soviet officials in Moscow to grant their approval and allow Yaroslavl representatives to travel to Burlington. He offered glowing reviews in public and ratcheted up his lobbying effort in private.

“People there seemed reasonably happy and content,” Mr. Sanders told reporters in Burlington about Yaroslavl, a city of about 600,000. “I didn’t notice much deprivation.”

Two days after returning to Vermont, Mr. Sanders wrote to the Soviet Embassy in Washington, asking for help in setting up the sister-city program.

“It is my strong belief that if our planet is going to survive, and if we are going to be able to convert the hundreds of billions of dollars that both the United States and the Soviet Union are now wasting on weapons of destruction into areas of productive human development, there is going to have to be a significant increase in citizen-to-citizen contact,” Mr. Sanders wrote.

Throughout their negotiations with Burlington City Hall, Yaroslavl officials were coordinating their messaging with Soviet officials in Moscow.

In a letter to Moscow seeking approval for travel to the United States, Yaroslavl officials pledged that they would talk about the “peace-loving foreign policy” of the Soviet Union and the changes being implemented by Mr. Gorbachev. They attached a seven-point “plan for information-propaganda work” on their visit to Burlington, with specific talking points for each of the delegation’s three members.

The plan is followed by a nine-page guide issued by the Soviet Foreign Ministry on how to communicate Mr. Gorbachev’s policies to international audiences. It describes antiwar movements, sister-city contacts and foreign cultural figures as particularly important targets for Soviet propaganda.

“When carrying out propaganda measures abroad, the forms and methods of the information-propaganda work and its concrete contents must be approved by the Soviet Embassy and take into account the Soviet Union’s relationship with the given country,” the document says.

In July, Yaroslavl officials formally allowed the sister-city relationship to go ahead, reflecting approval from Moscow. Mr. Sanders sent an electronic message to a Soviet cosmonaut, Valentina Tereshkova, the first woman in space and the head of the Union of Soviet Societies for Friendship and Cultural Contacts, thanking her for “expediting this process.”

“I believe that sister city programs like the Yaroslavl Burlington one, will help improve Soviet American relations and develop a more peaceful world,” Mr. Sanders wrote.

The sister city program was something of a capstone to nearly a decade’s worth of foreign policy activism in Burlington City Hall. As mayor, Mr. Sanders championed a range of international causes that often aligned him with left-wing movements and leaders in other countries, and against the Reagan administration, which he described as pursuing a strategy of military escalation that risked setting off a nuclear war.

Mr. Sanders pressed the city government to take positions against American intervention in Nicaragua and El Salvador, and against the invasion of Grenada. In 1985, he visited Managua for the sixth anniversary of the Sandinista revolution and met with its leader, Daniel Ortega.

Mr. Sanders personally managed the Soviet delegation’s visit to Burlington in October to sign the sister-city agreement, holding at least three phone calls with Yaroslavl officials and transmitting a detailed program covering seven days. There was a pilgrimage to the ice cream maker Ben & Jerry’s, where co-founder Ben Cohen told the Soviet officials they could have anything they liked in the gift shop, a delegation member, Yuri Novikov, recalled in an interview.

While the Yaroslavl documents show the Soviets to be planning a propaganda effort in Burlington, Mr. Casca, the Sanders campaign spokesman, said the reality was different when the Yaroslavl delegation arrived in Vermont in October 1988.

“Reporting at the time is clear, rather than propaganda, officials on both sides discussed the limitations of the Soviet system and their common desire to avoid nuclear war,” Mr. Casca said.

Three decades later, amid reports that the Kremlin was looking favorably upon Mr. Sanders’s presidential candidacy (as well as Mr. Trump’s), the Burlington-Yaroslavl relationship lives on in an era of renewed tensions between Washington and Moscow.

In February, the Yaroslavl Bears amateur hockey team played in an annual Burlington pond hockey tournament; Yaroslavl officials said the U.S. Embassy in Moscow made a special effort to arrange the team’s visas in time.

Some of the Yaroslavl residents involved in the relationship with Burlington still look back wistfully at the heady circumstances of Mr. Sanders’s visit in 1988 — a time when the Iron Curtain was starting to crumble, the Soviet Union seemed poised for democratic change, and interactions with Americans felt new and fascinating.

Mr. Novikov, a former head of the Yaroslavl Medical Institute who by his count made 10 trips to Burlington, said he had seen on TV that Mr. Sanders did not want Russians interfering in the campaign. In Mr. Novikov’s view, the goal of a President Sanders should be, at the least, to restore the level of cooperation that existed in the last years of the Cold War.

At times, Mr. Sanders’s global orientation as mayor stirred some resentment at home, with complaints that he was wasting time on international matters that had little to do with Burlington.

But Mr. Sanders’s argument then for the value of what he was doing echoes themes from his campaign speeches now.

Just before the Russia trip, Mr. Sanders told the board of aldermen, Burlington’s municipal legislature, that he hoped it would reduce the risk of armed conflict.

“We cannot have a good police, fire or planning department if there is a nuclear war,” Mr. Sanders said, according to official minutes of the meeting. “The enormous spending on the military by both countries strangles their local economies.”