WASHINGTON — When President Trump visited Senate Republicans last month for the first time since the coronavirus pandemic began ripping across the country, Senator Charles E. Grassley, the powerful chairman of the Finance Committee, confronted him about whether he still wanted to fulfill his years-old promise of lowering the cost of prescription drugs.

“You started this whole process,” said Mr. Grassley, an Iowa Republican who had drafted such a plan, and whom Mr. Trump had taken to calling early in the morning to discuss the issue. “Are you still interested in signing a bill?”

The president said that he was, according to a person in the room that day, adding that the Senate had “no choice” but to act. But the exchange only underscored that the drive to reduce pharmaceutical costs — once a marquee priority seen by both parties as a political imperative — has stalled at the very moment when people most need a fix.

Millions of Americans, including droves of newly unemployed, are stuck with increasing out-of-pocket costs for medication in the middle of a historic health crisis. But the political will to address the issue appears to have faded away.

“The problems are real. They’ve only gotten bigger,” said Tricia Neuman, a drug policy expert who directs the Medicare policy program at the Kaiser Family Foundation. A solution, she said, is on “life support.”

The politics have hardly changed — prescription drug prices have consistently ranked as the top health care concern for voters heading into the 2020 election — but Senate Republicans have shied away from acting and Democrats have resisted making concessions.

Now Mr. Grassley, working to salvage the effort, is planning to call for his bill to be included in the next round of coronavirus relief legislation that Congress is expected to consider later this summer, according to a senior Republican aide.

Senator Mitch McConnell, Republican of Kentucky and the majority leader, who has raised more than $200,000 from pharmaceutical companies so far this election cycle, appears to be in no mood to tackle the issue by bringing Mr. Grassley’s measure to the floor. In December, Mr. Grassley accused him of sabotaging his bill.

Longtime patient advocates now fear that the broad support they built among lawmakers for moving on the issue may be eroding in the face of an even more dramatic health crisis, one that has also prompted a health insurance emergency that has gone largely unaddressed by the Trump administration.

“All of the problems that pre-existed the pandemic are still there, if you’re paying too much for insulin, if you’re paying too much for cancer drugs like I am,” said David Mitchell, who founded Patients for Affordable Drugs and is battling a blood cancer called multiple myeloma. “Nothing has changed, except now we have millions of people who are unemployed who have lost income, who have lost insurance.”

Like Mr. Trump, Democrats have said they support a bill to lower drug costs, and the House passed such a measure in December. Former Vice President Joseph R. Biden Jr., the presumptive Democratic presidential nominee, released a sweeping prescription drug plan last summer that went far beyond what Mr. Grassley has proposed.

Months ago, House Democrats in politically competitive districts were inundated at town hall meetings with questions about drug costs, and assumed the issue would feature prominently in their re-election campaigns.

Many Republicans in Congress who have fretted about the political risks of their party’s push to repeal the Affordable Care Act, which the Trump administration on Thursday asked the Supreme Court to overturn, had hoped for action on drug costs, eager to show voters that they were willing to address the most pressing health care problems. Mr. Grassley said that during his town hall meetings in Iowa before the pandemic, a quarter of the time was spent discussing prescription drugs.

“It’s a pocketbook issue,” Ms. Neuman said. “And it is one that candidates who are Republicans and Democrats all talk about.” 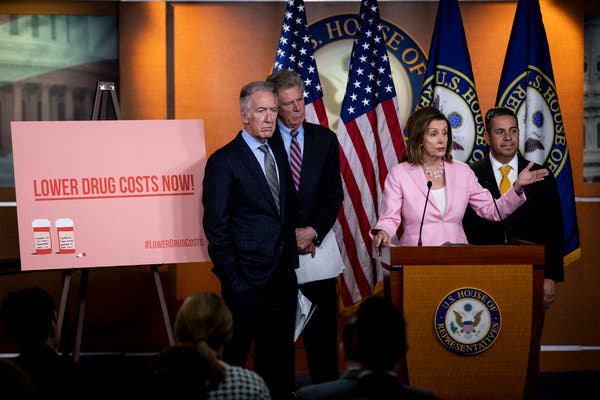 Americans spend tens of billions of dollars on prescription drugs annually. Public health experts say that level of spending is not surprising given how manufacturers keep debuting new drugs at high prices while raising prices on hundreds of drugs already on the market.

Prescription medicine use has only intensified during the coronavirus crisis: Express Scripts, a prescription benefit manager with over 100 million customers, saw spikes in March for three-month refills and new prescriptions for conditions associated with higher coronavirus risk.

“The problem has expanded,” said Representative Kim Schrier, Democrat of Washington and a pediatrician.

Because of border restrictions amid the pandemic, Ms. Schrier said, some in her state can no longer drive to Canada to purchase insulin at a fraction of what it costs in the United States. “There’s this fear that we’re going to run out of medications, so people are trying to get more in hand,” she said.

Mr. Mitchell said that his group had observed significant price increases on drugs needed for coronavirus patients, including anticoagulants for blood clots.

“There’s more of a sense of urgency,” said Representative Frank Pallone Jr., Democrat of New Jersey and the main sponsor of the House bill, called H.R. 3, which was given a low number to reflect its top ranking among Democratic priorities. “So many people have lost their jobs. So many people have lost income. They’re more conscious than ever of the price of health care.”

Mr. Grassley’s bill would cap the growth of drug prices in Medicare at inflation level, and impose a $3,100 limit on out-of-pocket costs for tens of millions of seniors and Americans with disabilities enrolled in its drug coverage program. The plan would provide nearly $100 billion in savings, according to the Congressional Budget Office.

The House bill goes further in seeking to control the growth of drug costs, calling for the secretary of health and human services to negotiate prices with manufacturers, a provision that is projected to save more than $500 billion over a decade, according to the C.B.O. The House will vote on that provision again as part of a bill it plans to bring to the floor next week to bolster the Affordable Care Act.

The bills have faced predictable but fierce resistance from pharmaceutical companies, which lawmakers say are newly fortified as a result of their work developing coronavirus treatments, including the most sought-after drug — a vaccine — that could arrive next year.

“They feel emboldened,” Mr. Grassley said. “And I think they feel that they don’t have to worry about this bill.”

While the White House has made little progress on the president’s 2018 prescription drug objectives, it has made incremental changes in line with some of the congressional proposals. In May, Mr. Trump announced that seniors with diabetes could enroll starting next year in Medicare drug plans that would cap their out-of-pocket insulin costs at $35 per month.

Lowering drug prices is the rare issue for which Americans support more government intervention. Majorities of Democrats and Republicans believe Congress should do more to regulate drug prices. A majority of Americans say they would even accept higher taxes and fewer new drugs being developed if it mean paying less for prescription drugs.

The public’s mood is reflected in Washington, where lowering drug prices has been one of the few causes with broad bipartisan support in Congress, giving the issue momentum in a Senate with a thin legislative record. Every Democrat on the Finance Committee voted for Mr. Grassley’s bill, and the dozen Republicans who have pledged support cover the ideological spectrum, from Senator Steve Daines of Montana, a conservative ally of Mr. Trump’s, to the more moderate Senator Susan Collins of Maine. Both are running for re-election this year, as are Senators Joni Ernst of Iowa and Martha McSally of Arizona, who also back the bill.

Mr. Grassley has lobbied other Republicans on the Senate floor this year, making the pitch that he represents a possible last chance for a measured plan. His Republican successor on the finance committee, Senator Michael D. Crapo of Idaho, may be unfriendlier to reform if Mr. Trump wins a second term, and a Democratic administration, he has said, would pass something even less desirable.

But Mr. Grassley and his colleagues have yet to find a compromise with House Democrats, and the measure has stalled since its approval by the Finance Committee. Democratic and Republican aides in the House and Senate privately say that Mr. Trump, notoriously fickle and uninformed on policy, could hasten a resolution with a phone call to Mr. McConnell, but he has chosen not to do so. Vice President Mike Pence and Alex M. Azar II, the health secretary, have endorsed the legislation.

Late last month, Mr. Grassley met with Speaker Nancy Pelosi and policy aides to see whether a compromise was still feasible, and where components of their bills might go. But little has come of it.

A final target could be late November, when Congress faces a deadline to extend some health care programs. But by then, in the wake of the election, the political landscape could look far different. And voters may well have already have exacted a political price for Congress’s failure to move on the issue.

“The issue does not go away” without a deal, said Ms. Neuman, the drug policy expert. “The question is, will voters hold candidates responsible for not taking action?”