WASHINGTON — One of the most progressive lawmakers in the House and one of the most conservative in the Senate, staring down a pandemic-driven unemployment rate at its highest level since the Great Depression, have come to the same conclusion: It’s time for the federal government to cover workers’ salaries.

As Congress prepares to wage a new battle over how to best aid workers and businesses devastated by the coronavirus crisis, Representative Pramila Jayapal, Democrat of Washington and a leader of the Congressional Progressive Caucus, and Senator Josh Hawley, Republican of Missouri and a rising conservative star, are both making the case to their party’s leaders that guaranteed income programs should be part of the federal relief effort.

Ms. Jayapal’s paycheck guarantee program was spotlighted this week after progressive leaders, angry that the plan was omitted from House Democrats’ sprawling $3 trillion pandemic relief proposal, urged their members to officially inform party leaders that they were undecided on the bill, effectively threatening to block it. By Wednesday, progressive groups including Indivisible and MoveOn signaled their support for the legislation even without the paycheck measure. It was on track to pass the House on Friday.

But the revolt reflected the divide among Democrats over how far to go during an extraordinary economic crisis in building a government backstop for workers’ livelihoods. And support for such ideas on both ends of the ideological spectrum signals how far the political debate has shifted in just a few months.

House Democratic leaders have included a second round of those checks in the relief bill they plan to push through on Friday, but many of their rank-and-file members want to go much further. 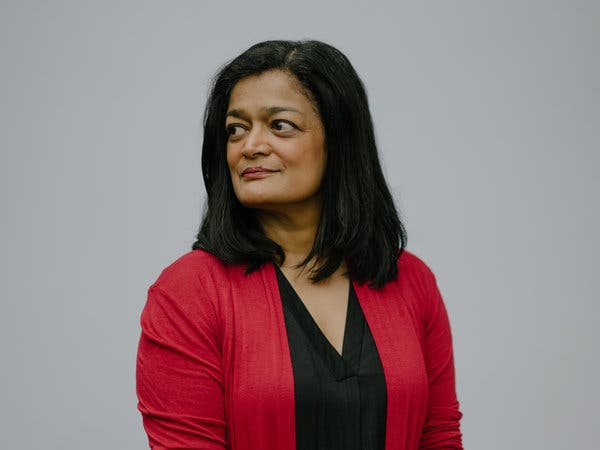 Representative Pramila Jayapal, Democrat of Washington, is making the case that guaranteed income programs should be part of the federal coronavirus relief effort.Credit…Grant Hindsley for The New York Times

Ms. Jayapal’s bill would cover workers’ salaries up to $90,000 for up to six months — allowing businesses to rehire furloughed and laid-off employees — and distribute grants to businesses to cover operating costs. It would cost $654 billion over six months and benefit more than 36 million workers, according to an analysis by Moody’s prepared for her office. A similar measure was introduced in the Senate by Senator Bernie Sanders, the Vermont independent and one of the most progressive members of Congress, along with Senators Doug Jones of Alabama and Mark Warner of Virginia, both centrist Democrats.

Supporters of the plan, which include labor leaders like Richard Trumka, the AFL-CIO president, and Janet Yellen, the former chairwoman of the Federal Reserve, argue that it would allow businesses to rehire workers to keep them on their employer-based insurance plans amid unemployment insurance backlogs. They argue that the second round of $1,200 checks is insufficient to address the seriousness of the crisis.

The effort comes at a time when the idea of creating a temporary government backstop to help workers weather the pandemic has gained traction among lawmakers and economists around the world. The British government announced in March that it would pay up to 80 percent of wages for workers furloughed as a result of the pandemic, and the Spanish government unveiled a plan to permanently provide low-income citizens with cash payments.

“We’re all overwhelmed by the current crisis,” said Matt Zwolinski, the director of the University of San Diego’s Center for Ethics, Economics and Public Policy. “Part of what it means to be overwhelmed is that a lot of the standard objections that people have had to large government transfer programs have been swamped by considerations of the great need that has to be met quite urgently.”

Representative Steny H. Hoyer, Democrat of Maryland and the majority leader, told reporters on Tuesday that both he and Ms. Pelosi believe the proposal “has great merit to it.”

“This is not going to be the last word nor the final word as we move forward,” Mr. Hoyer told reporters on Tuesday of the $3 trillion relief package unveiled this week. Ms. Jayapal’s proposal, he added, “is certainly under great discussion.”

Speaker Nancy Pelosi has been publicly lukewarm on the idea, while acknowledging last month in an interview with MSNBC that “we may have to think in terms of some different ways to put money in people’s pockets.”

“Let’s see what works, what is operational and what needs other attention,” she said. “Others have suggested a minimum income, a guaranteed income for people. Is that worthy of attention now? Perhaps so.”

The measure has received an even chillier reception from Republican leaders. Representative Steve Scalise of Louisiana, the minority whip, called guaranteed income a “radical, socialist idea” and said Congress should focus on carrying out the relief packages that already passed, echoing an argument that Senator Mitch McConnell of Kentucky, the majority leader, has taken up in recent days.

But the idea has gained currency with some in Mr. McConnell’s fold. Mr. Hawley, the Missouri Republican, has introduced a similar proposal mirroring the British government’s plan that would cover 80 percent of employers’ payroll costs up to the median wage, about $49,000 a year. A companion bill that Mr. Hawley introduced goes further, providing families and single parents making less than $100,000 with a monthly check for the duration of the crisis.

“Let’s not overthink this,” Mr. Hawley said in unveiling his bill. “These families need relief — now — to pay bills that are coming due, make those emergency grocery runs and get ready for potential medical bills. Let’s get it to them.”

Other conservative lawmakers, including Representative Justin Amash, Independent of Michigan and a libertarian, has also backed direct payments to Americans. “The best thing we could have done is get universal monthly cash relief to the people,” he wrote on Twitter.

Mr. Amash voted against the $2.2 trillion stimulus package enacted in March, which included hundreds of billions of dollars’ worth of business relief programs and an enormous expansion of jobless aid.

The package was “inefficient and fundamentally flawed,” he wrote on Twitter. “This direct aid to their employees would have more quickly and effectively supported those small businesses that need the most help and are being left behind by the convoluted relief package.”