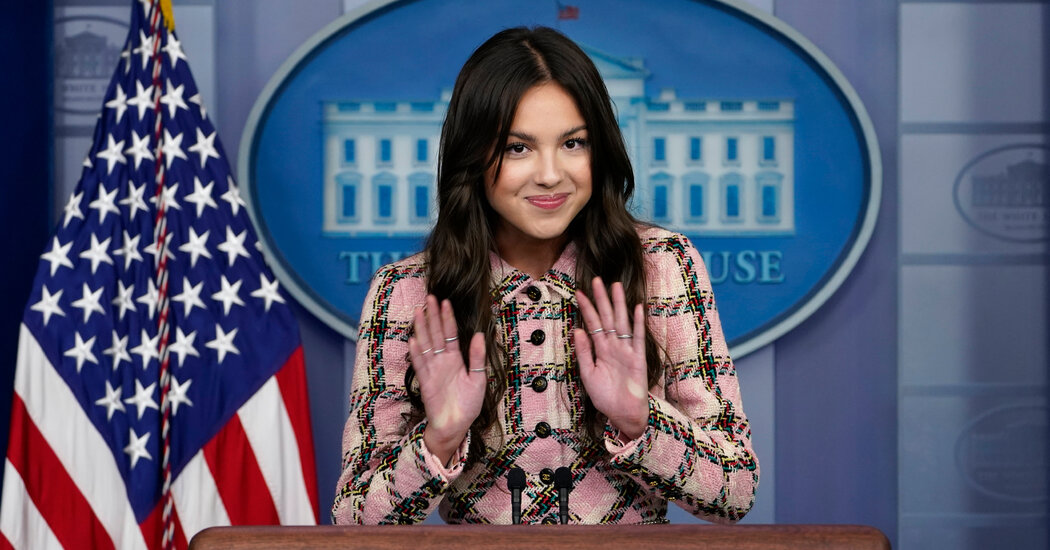 WASHINGTON — Nixon and Elvis. Trump and Kanye. Biden and Olivia.

On Wednesday, Olivia Rodrigo, the 18-year-old pop star with the No. 1 album in the country, visited the White House and joined the Biden administration’s efforts to use the young and influential to reach the young and unvaccinated.

“It’s important to have conversations with friends and family members,” Ms. Rodrigo said, reading from prepared remarks during a short appearance in the White House briefing room, “and actually get to a vaccination site, which you can do more easily than ever before.”

The White House could not have scripted it better. (In fact, White House officials helped her craft her remarks, according to an administration official.) The “Good 4 U” singer has millions of followers on social media who hang on her every word, and she is part of a growing list of creators, celebrities and influential people who are interested in working with the White House to deliver a pro-vaccine message directly to their respective communities.

Rob Flaherty, the White House director of digital strategy, has been organizing an effort to reach out to people like Ms. Rodrigo and invite them to Washington to create content. The plans for bringing her to the White House, Mr. Flaherty said in an interview, began in June. After she arrived, Ms. Rodrigo wandered the halls of the West Wing with Dr. Anthony S. Fauci, stopping by desks and chatting with officials before it was time to film a series of educational videos with President Biden.

“Not every 18-year-old uses their time to come do this,” Jen Psaki, the White House press secretary, said from the lectern.

Administration officials are hoping the time investment pays off. In recent weeks, as the federal strategy has shifted to more personalized efforts to reach unvaccinated people, the White House has recruited YouTube stars, social media influencers and celebrities who can send the messaging to their own channels. It has also highlighted efforts by popular dating apps to encourage young singles to promote their vaccination status.

Healthy young adults are historically hard to reach, and the White House has been upfront about the difficulties that officials have faced in persuading those groups to receive a vaccine. Hesitancy can result from a mix of inertia, fear, busy schedules and misinformation.

At times, the young stars who have met with Mr. Biden have gone on to directly address those concerns with their followers. In a video titled “I COLLABED WITH PRESIDENT BIDEN! THIS IS NOT A DRILL!” after he interviewed the president in May, Manny MUA, a YouTube star and makeup artist, told his four million followers that he had enjoyed the experience but that getting vaccinated was still a personal choice.

“You can do whatever you guys want,” he said in the video, “but I am pro-vaccine.”

Mr. Biden’s aides say he is open to taking questions from YouTubers and welcoming celebrities to the White House if it might help sway the unconvinced.

“There’s only so much we as a White House can do to stop misinformation,” Mr. Flaherty said. “What we can do is go on offense. That underscores exactly why this work is so important.”

Young people under the age of 27 are vaccinated at a lower rate than older people, according to the White House, and they were part of the reason the administration said it fell short of Mr. Biden’s goal of partly vaccinating 70 percent of adults by July 4. Younger people became eligible for immunization later in the vaccine rollout, after other high-priority risk groups, and children aged 12 to 15 became eligible for the Pfizer-BioNTech vaccine only in mid-May.

Across the country overall, providers were administering about 0.55 million doses per day on average, as of Wednesday, about an 84 percent decrease from the peak of 3.38 million reported on April 13.

The White House still faces significant challenges in reaching reluctant Americans, particularly in states where officials say they face pressure against evangelizing for a vaccine.

After Ms. Rodrigo left the podium, Ms. Psaki was asked about Dr. Michelle Fiscus, a pediatrician and Tennessee’s top vaccination official, who said she was fired from her job after distributing a memo that suggested that some teenagers might be eligible for vaccinations without their parents’ consent. The memo repeated information that has been publicly available on the state Health Department’s website for years.

“We continue to see young people hit by the virus,” Ms. Psaki said, “and we’ve been crystal clear that we stand against any effort that would politicize our country’s pandemic response and recovery from Covid-19.”