If you’re like me, you probably have bad memories of using iTunes in the mid-2000s. On Windows, in particular, Apple’s software was notoriously slow and buggy. But what I discovered all these years later is that there are several compelling choices when it comes to desktop music software. I found that I tend to prefer apps like MusicBee and foobar2000 that are passion projects created by people who care about small details like how you queue songs. They nail the basics and feature intuitive, easy-to-use interfaces. If it wasn’t for Bandcamp, I would have never tried these apps.

While these apps don’t integrate with platforms like Google Assistant as deeply as Spotify does, I also found less friction than I expected. A lot of that is thanks to Bandcamp itself: it may not be as big as Spotify, but it’s also not a small player either. My Sonos system is one of the main ways I enjoy listening to my music, and the two work together seamlessly. Moreover, it may not market itself as a streaming app, but you can also use Bandcamp to stream music to your phone. 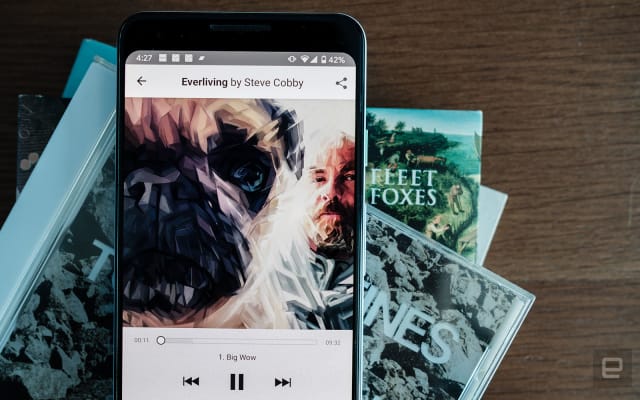 I do miss some of Spotify’s more marquee features, but thanks to their absence, I’ve also found pleasant surprises. Without Discover Weekly, I’ve started to read music blogs again, including Bandcamp’s Daily blog. In some ways, this has been the change I’ve enjoyed the most. With streaming apps, adding a song to your library is so frictionless you don’t think about it. At times, you also don’t think about the story of how that music came to be. One of my favorite recent Bandcamp purchases is an album from a band called Panchiko. I found out about it after reading a Bandcamp Daily feature on how the album was lost for almost 20 years.

I know these are all small things and probably won’t move the needle for people who love streaming apps. But for me switching to Bandcamp has brought back some of the rituals I loved about music before the streaming era. And particularly at a time like this, it feels good to return to that while helping others.