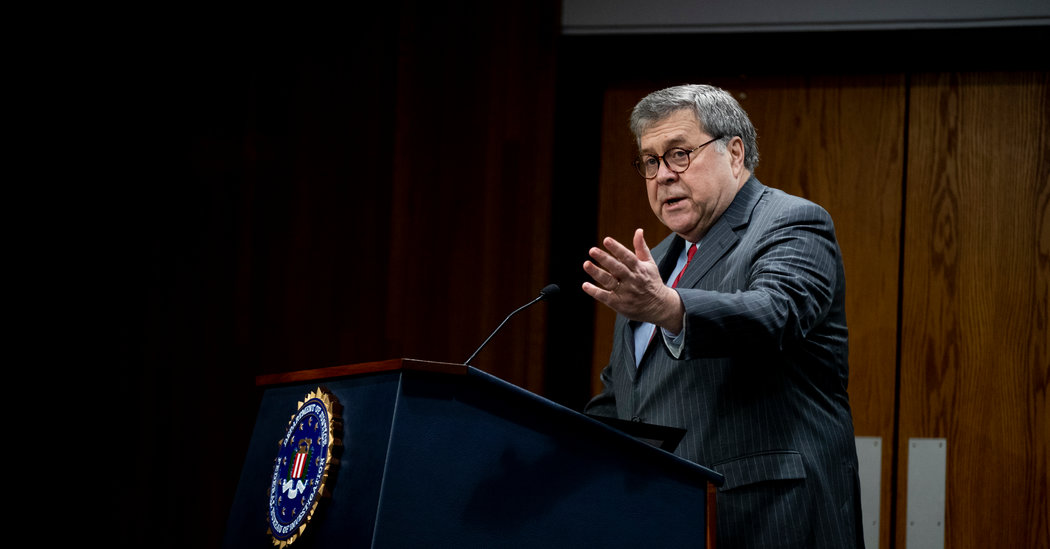 WASHINGTON — Attorney General William P. Barr dismissed President Trump’s attempts to rebrand the Russia investigation as a criminal plot engineered by former President Barack Obama, saying on Monday that he expected no charges against either Mr. Obama or former Vice President Joseph R. Biden Jr. as a result of an investigation into how their administration handled Russian election interference.

“As long as I’m attorney general, the criminal justice system will not be used for partisan political ends,” Mr. Barr said during a news conference announcing that a Saudi gunman had been in communication with Al Qaeda before a deadly attack last year at a military base in Pensacola, Fla.

Mr. Barr said that John H. Durham, the federal prosecutor investigating how law enforcement and intelligence officials confronted Russia’s operations to meddle in the 2016 election, was examining some aspects of the case as potential crimes but that he was focused on other people, not Mr. Obama or Mr. Biden.

But Mr. Barr noted there was a difference between abusing power and violating the law, emphasizing as he has previously that he believes that law enforcement and intelligence officials unfairly targeted Mr. Trump as they sought to understand links between his campaign and Russia.

Mr. Trump has in recent days targeted Mr. Obama in public remarks in a way that no modern sitting president has, accusing his predecessor of unspecified crimes under a vague but politically charged catchphrase, “Obamagate.”

This is a breaking news story. Check back for updates.

News DSMW - July 29, 2021
0
Americans are used to hearing about what a great country they live in—how lucky they are to have been born in, or to have immigrated to, the United States. “American exceptionalism”—a phrase, funnily enough, coined by Joseph Stalin—is an idea that, on the whole, is still embedded in the country’s collective...

News DSMW - July 29, 2021
0
It may end up taking 30 years—but Waterworld could finally get the sequel it so desperately wanted. Collider reports that a streaming TV show take on the infamous 1995 Kevin Costner film is now in the works, which would pick up the story in that film 20 years after its ending....

Corporate America Is Building Its Own Surveillance State. Will the FTC...