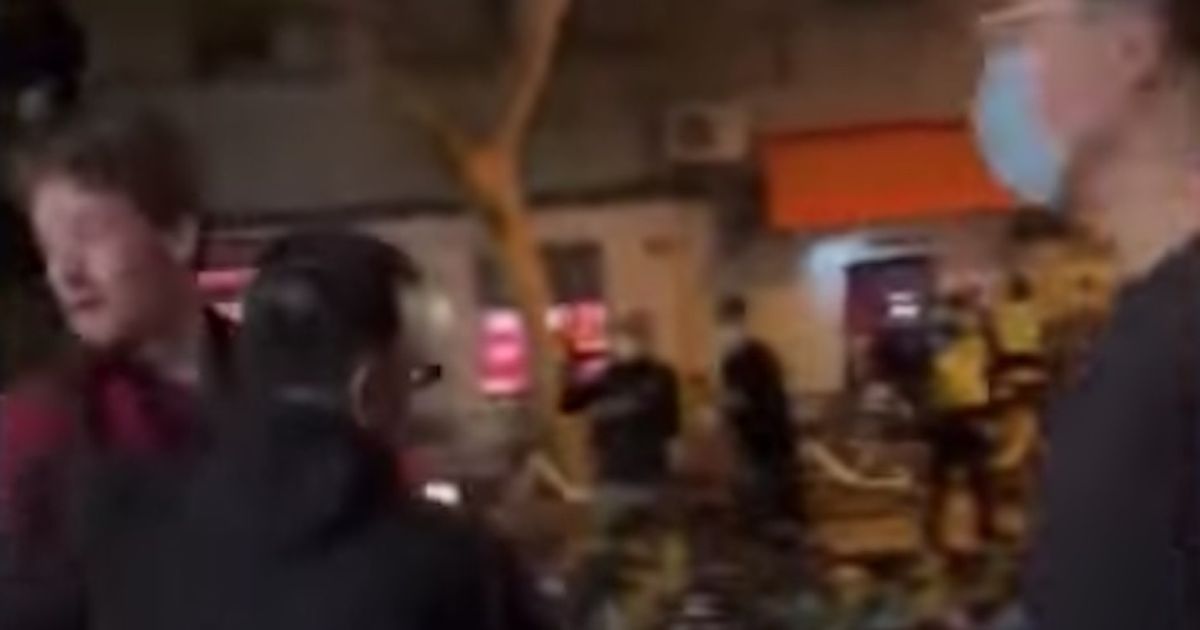 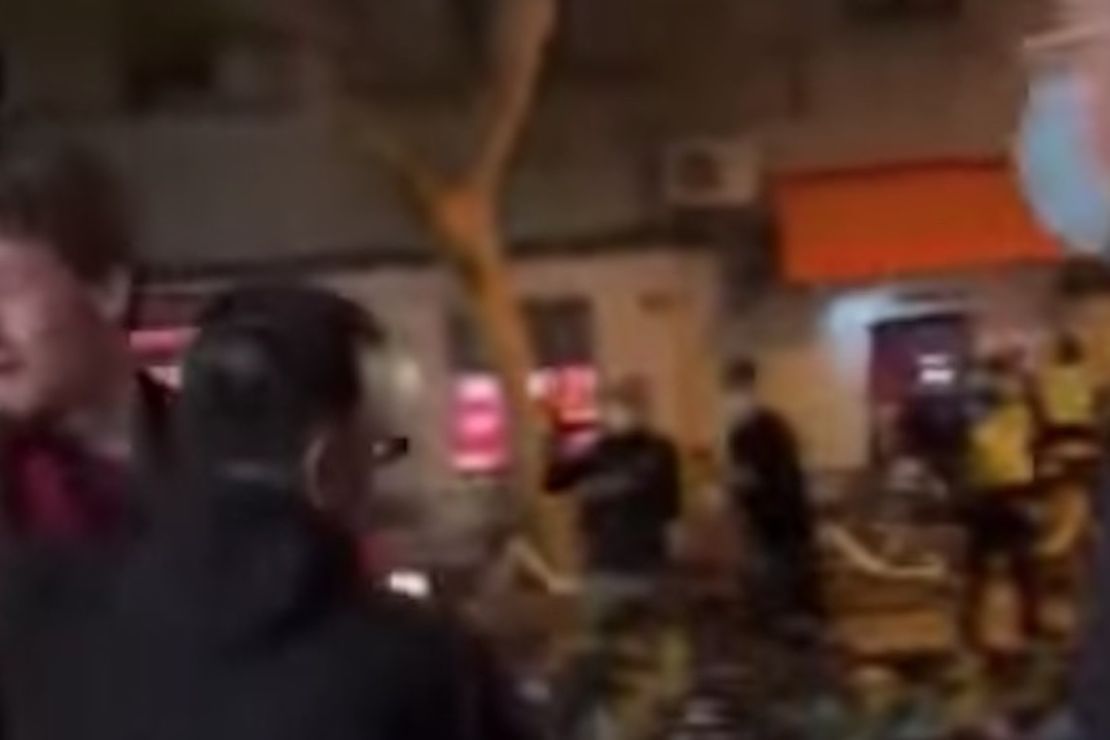 China’s protests had already made global headlines, but their security services poured fresh petrol on the flames yesterday. BBC reporter Ed Lawrence got gang-tackled by police while covering the protests erupting in Shanghai over Xi Jinping’s zero-COVID policies and the deaths of a dozen or more people in a fire that erupted in a locked-down apartment building. The BBC now reports, and other media organizations have amplified, that Lawrence got beaten and kicked repeatedly while in custody over his reporting on the growing unrest against Xi:

The BBC said Chinese police had assaulted one of its journalists covering a protest in the commercial hub of Shanghai and detained him for several hours, drawing criticism from Britain’s foreign minister who said the detention was deeply disturbing.

China disputed the account and said the journalist had not identified himself as a reporter.

“The BBC is extremely concerned about the treatment of our journalist Ed Lawrence, who was arrested and handcuffed while covering the protests in Shanghai,” the British public service broadcaster said in a statement late on Sunday.

“He was held for several hours before being released. During his arrest, he was beaten and kicked by the police. This happened while he was working as an accredited journalist.”

This Telegraph video appears to show Lawrence’s arrest. The man yells back something like “call the consulate now” in a clear British accent, and multiple news sources identify him as the BBC reporter:

Perhaps mindful of the potential that the arrest got caught on video, China’s official response only offered a limited denial. Zhao Lijian, who has a long history of spewing utter nonsense from his perch as the official flack for the Foreign Ministry in Bejing, trod a bit more carefully this morning. Zhao didn’t deny the arrest, but he did offer a denial for the rest of the BBC’s allegations and claimed that Lawrence never identified himself as a journalist:

“According to authorities in Shanghai, the journalist in question did not reveal his journalist identity at the time, he did not openly show his foreign press card,” he added.

“When the incident happened, law enforcement personnel asked people to leave, and when certain people did not co-operate, they were taken away from the scene.”

That, however, was not the only explanation given by China to the Brits. Apparently, they told the BBC at one point that Lawrence got arrested for his own good — to protect him against a possible exposure to COVID-19 from the crown. No, really:

The BBC, in its statement before the Chinese ministry comment, said it had not been given a credible explanation for Lawrence’s detention.

“We have had no official explanation or apology from the Chinese authorities, beyond a claim by the officials who later released him that they had arrested him for his own good in case he caught COVID from the crowd,” it said.

Both explanations are nonsense. Police and China’s authorities know who Lawrence is and what he’s doing in Shanghai. In a society with as many Orwellian controls over public spaces as Xi’s regime has, police likely know every movement of Lawrence and other foreign reporters in China. They arrested Lawrence because his reports help expose the crumbling foundation of Xi’s power in his insane attempt to turn the entire country into a COVID-19 prison.

The Associated Press tried to put a good face on Xi’s policies by noting that “China’s infection numbers [are] lower than those of the United States and other major countries,” but that’s only true if people believe Beijing’s official reports. And even if that were true, it would still be entirely unnecessary. Western vaccines at least help prevent severely acute cases, and deaths are usually limited to narrow demographic ranges of elderly and immune-compromised individuals. Three years into the pandemic, China should have prepared itself to deal with those risks by bolstering its health-care response.

Instead, they’ve stuck with their useless vaccines and lockdowns. The result? For the first time in decades, a popular revolt has arisen in the streets against the entire system that has literally imprisoned the entire country. The people no longer want an end to the lockdowns, but an end to seven decades of Communist Party rule altogether:

Police using pepper spray drove away demonstrators in Shanghai who called for Xi Jinping to step down and an end to one-party rule, but hours later people rallied again in the same spot. Police again broke up the demonstration, and a reporter saw protesters under arrest being driven away in a bus.

The protests — which began Friday and have spread to cities including the capital, Beijing, and dozens of university campuses — are the most widespread show of opposition to the ruling party in decades.

In a video of the protest in Shanghai verified by The Associated Press, chants against Xi, the most powerful leader since at least the 1980s, and the Chinese Communist Party sounded loud and clear: “Xi Jinping! Step down! CCP! Step down!” …

In Beijing, a group of about 200 people gathered in a park on the capital’s east side and held up blank sheets of paper, a symbol of defiance against the ruling party’s pervasive censorship.

“The lockdown policy is so strict,” said a protestor, who would give only his surname, Li. “You cannot compare it to any other country. We have to find a way out.”

Postings on social media said there were also demonstrations at 50 universities.

About 2,000 students at Xi’s alma mater, Tsinghua University in Beijing, gathered to demand an easing of anti-virus controls, according to social media posts. Students shouted “freedom of speech!” and sang the Internationale, the socialist anthem.

The perpetual lockdowns are not sustainable — not economically either, but clearly not politically. People can only be cowed for so long by a virus, especially once they have learned that the rest of the world has long since returned to normal and deal with it entirely differently. This is Tiananmen Square multiplied by dozens, perhaps hundreds, and police at some point will get overwhelmed by the momentum of popular revolt unless Xi changes his policies. Given Xi’s intent to turn himself into an idol for worship, however, his capacity for change may not be sufficient to deal with the popular reaction to his megalomania. The result could be apocalyptic in China.