This week, in one of his first in-person appearances since the pandemic started, Joe Biden made some Pennsylvania voters a promise.

“I’m not banning fracking. No matter how many times Donald Trump lies about me,” the Democratic presidential nominee said at Carnegie Mellon University in Pittsburgh, where much of the nearby industry relies on the controversial technique for extracting natural gas.

It was a move meant to clarify his position and extend an olive branch to workers who rely on the fossil fuel industry after he reiterated his commitment to combating climate change in recent weeks.

But for a different section of voters, it was another nail in the coffin.

Kishineff is part of a progressive, far-left group of voters who say they will not vote for Biden, even if it means a Trump victory, largely because of the candidate’s failure to adopt a progressive agenda on healthcare, mass incarceration, the environment and policing.

In 2016, this group was part of the estimated 5 million Americans who voted for third-party candidates, including hundreds of thousands of voters in swing states like Florida and Michigan.

But two months ahead of the presidential election – and after fours years of Trump – experts say the group is less of a factor for Democrats than it was in 2016. That shrinking power could serve either to further alienate progressive voters, or coax them into an eventual vote for Biden, especially if he chooses to adopt more leftist policies.

“That group is smaller,” said Rashawn Ray, a political sociologist and fellow at the Brookings Institution. “There have been deliberate decisions made with people saying ‘we cannot make this mistake’ again, knowing they played a role – even if it’s a small role – in Trump getting elected.”

Nick Cruse, a 29-year-old in Kansas City, Missouri, said it wasn’t that simple for him. “There’s no one who has done more damage to the Black community in the last 40 years than Biden,” he said.

Cruse, who is Black, cited Biden’s authorship of the 1994 crime bill, which contributed to mass incarceration rates, and his 2005 bankruptcy bill, which made it more difficult for people with limited income to pay off their debts. While Cruse is staunchly against Trump and the Republican party, he said Biden represents many of the same ideals as the current president when it comes to corporate politics. 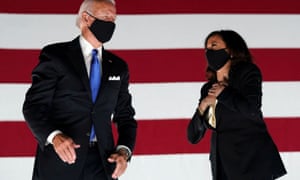 For some, Joe Biden’s selection of Kamala Harris has broadened his appeal; for others it just underlines the problem with him. Photograph: Kevin Lamarque/Reuters

Angelica Whipple agreed that avoiding a Trump re-election was not enough reason to vote for Biden.

The 29-year-old moved from Puerto Rico to Massachusetts as a child and has been a resident there since. A few years ago she left her job of 11 years as a personal care assistant for the elderly because of a disability. But trying to get disability benefits was difficult, she said, and she went months without health insurance, delaying surgery for ovarian cysts in the interim.

Whipple had voted for Barack Obama in previous elections but said that her political views changed in 2016, when Sanders ran for president. The Medicare for All platform, and legalization of marijuana, became non-negotiable to her. Biden has not committed to either of those policies, though he supports a public option health plan.

“He’s very steadfast in not doing anything for progressives,” Whipple said. “I don’t see how he’s that much better than Trump. At least with Trump we see it out front.”

Both Cruse and Whipple said that Biden’s vice-presidential pick, Kamala Harris, was another drawback for progressives, mostly due to her past role as a prosecutor. That has become an even more pointed issue during the past months of police brutality protests, since neither Biden nor Harris has explicitly condemned far-right agitators, or committed to defunding police departments.

“He’s been doing all of these horrendously centrist things and surrendering to the Republican narrative of protesters being rioters,” said Matt Myers, a software engineer in Seattle. “Making the false equivalence … it’s just not acceptable. He’s basically kicking the left in the teeth.”

Even so, several of the progressive voters said they would consider voting for Biden if he were to adopt some of their key platforms, such as Medicare for All, which has widespread support among Democrats. So far, they said, that hasn’t come to fruition. “If Biden is willing to support [those policies] I will sacrifice my own integrity and vote for him,” Kishineff said.

Cruse also said he would vote for Biden if he were to adopt Medicare for All and legalization of marijuana. But, he said, that would still be a “huge compromise”. And Jessica, a voter in Texas that the Guardian spoke to earlier this year said she still plans to vote for the Green party.

Myers is hoping Biden will also reform student debt, which left him bankrupt after he went to college for the first time. While he is already planning to vote for Biden, he continues to be a vocal critic to help try to push the platform left, which he said is not only ideological but a better strategy for Democrats.

“I kind of feel that the Democrats have been throwing easy elections because they keep running boring centrists who don’t excite anyone,” he said. “But my bigger fear is that Biden is going to represent four more years of a weak and useless Democrat party that … just sets up the conditions for someone worse than Trump.” 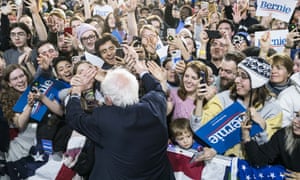 Bernie Sanders has endorsed Joe Biden but the energy from his campaign is not automatically transferable. Photograph: Bloomberg/Getty Images

Meanwhile, the fact that Sanders had come out to actively endorse Biden in a way that he didn’t with Hillary Clinton didn’t seem to resonate with his own supporters. “I think it has split the Sanders movement into pieces,” Kishineff said. “A lot of us are not sure whether he came into this race compromised.”

Ray pointed out that Biden had adopted some of the progressive agenda, though not always explicitly. He noted that the candidate has had public conversations with Sanders supporters, like Cardi B, and that he chose a Black woman as running mate, even if Harris wasn’t the group’s chosen candidate.

He also thought Biden would end up reaching out to progressive voters in the days leading up to the election. “Part of what’s happening with Biden is he hasn’t had to do that yet,” Ray said. “He doesn’t want to pull those cards out too soon.”

But for some of the #BernieorBust crowd, voting for a third-party candidate or withholding their vote is not only about Trump and Biden. It’s about trying to diminish the country’s two-party system, in which Democrats and Republicans both have compromised on what they care about the most.

Until then, and perhaps in spite of that, this group of voters have no plans to lend their support to what they see as an establishment candidate. Kishineff said he will vote for Gloria La Riva, from the Party for Socialism and Liberation. Cruse plans to vote Green party, he said, to send a message to the Democrats. Whipple plans to write in Bernie Sanders.

“We keep shaming progressives but maybe it’s time to look at Biden and push him left,” Whipple said. “Let that be the change.”