Democratic candidates rounded on Bernie Sanders at the crucial 10th primary debate in South Carolina on Tuesday night, seeking to slow his momentum as the current frontrunner in the race for the Democratic presidential nomination.

The Vermont senator, who cruised to victory in the Nevada caucuses last weekend and holds a firm lead from the first three early voting states, faced fire from rivals looking to halt his rise in the race to become the Democratic candidate to take on Donald Trump in November’s election.

Former New York mayor Mike Bloomberg used his first answer to criticize Sanders over recent reports that Russia is interfering in the 2020 election to help his campaign.

Sanders responded: “Let me tell [Russian president Vladimir] Putin… If I’m president of the United States, trust me, you’re not going to interfere in any more American elections.”

Massachusetts senator Elizabeth Warren, a fellow progressive, also took aim at Sanders, saying the pair agree on a lot of things, but that she’d be a “better president”.

“Progressives have one shot, and we need to spend it on a leader who will get something done,” Warren said.

But Warren spent more speaking time taking aim at Bloomberg, fiercely criticising his past comments on women, and highlighting one of the most disturbing remarks Bloomberg allegedly made to a female employee in 1995, which he denies.

The candidates on stage – who also included former vice-president Joe Biden, Minnesota senator Amy Klobuchar, former mayor Pete Buttigieg, and billionaire hedge fund manager Tom Steyer – frequently bickered and talked over each other as they tried to make their mark days ahead of the South Carolina primary on Saturday, and Super Tuesday on 3 March, when 16 states and territories will have their say.

The South Carolina primary marks the first vote in the deep south and will see African American voters form a majority of the electorate for the first time.

The debate, at the Galliard Center in downtown Charleston, took place just a few dozen feet from the Mother Emanuel AME church, the oldest African Methodist Episcopal church in the southern United States, which has long been a centre for resistance against white supremacy and racism in South Carolina.

It was also the site of the 2015 church massacre, when a white supremacist terrorist murdered nine black churchgoers in a mass shooting that shook the nation.

The legacy of that horrific terror attack was referenced by Biden in a question gun control, forcing Sanders to defend his mixed record on the issue, and explain why he voted in the early 2000s to protect gun manufacturers from legal liability.

Sanders initially tried to pivot to criticizing Biden for his record on trade deals, prompting boos from the Charleston audience.

“I have cast thousands of votes, including bad votes,” Sanders then said. “That was a bad vote.”

Biden has long courted voters in the black community, touting his record as vice-president to America’s first African American president. But recent polling has suggested that Sanders, buoyed by success in a multicultural electorate in Nevada, is now the frontrunner with black voters nationally.

Biden, who lagged behind in Iowa and New Hampshire and finished a distant second in Nevada, still edges Sanders in South Carolina, according to recent polling, which places the former vice-president at 30% of the vote compared with Sanders’ 23%. 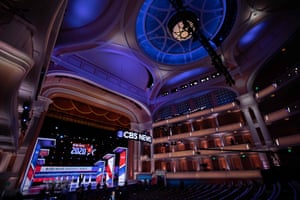 This evening’s event also sees Steyer return to the debate state. His campaign has invested millions in adverts in the state and is currently polling third on 13%.

The debate marks the last time the candidates will face off before Super Tuesday, which has the potential to whittle down the field even further. Super Tuesday will also be the first time that Bloomberg, who has invested close to half a billion dollars of his personal fortune into his campaign, will feature on the ballot.

In 2016, Hillary Clinton won South Carolina with an overwhelming majority against Sanders. That result underlines just how significant a strong showing would be this time around for Sanders who had struggled to attract voters of colour in early states during the 2016 campaign.

On Monday evening Sanders released a list, live on CNN, of how he plans to finance some of his most ambitious policy pledges, including a “Medicare for All” bill to ensure healthcare for all Americans, and the Green New Deal, a radical plan to combat climate change.

His climate change plan would be funded largely by aggressive taxation of the fossil fuel industry, while his healthcare plan would be implemented via a number of funding plans, including a household premium and higher taxes on the super wealthy.

Warren and Klobuchar were looking to capitalize on strong showings at the last debate in Nevada. While Klobuchar enjoyed a surge in New Hampshire and Warren made headlines after forcefully criticising Bloomberg on the debate stage, both are well behind in South Carolina polls and the overall delegate count.