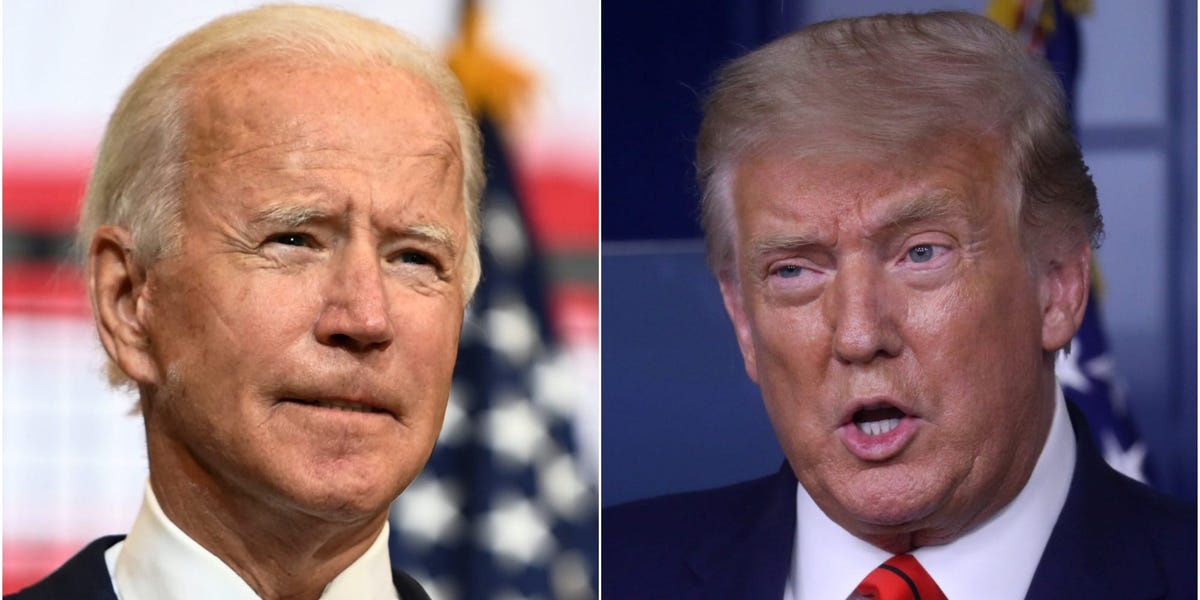 President Donald Trump and his Democratic rival Joe Biden took rhetorical swipes at each other Monday as the presidential campaign entered its traditional homestretch on the US Labor Day holiday.

Trump described Biden, who he trails in national polls, as a threat to the economy and “stupid,” while Biden took aim at Trump over reports the president had disparaged fallen troops, calling him “downright un-American.”

Trump again pushed back against a report in The Atlantic that he had referred to fallen US troops as “suckers” and “losers,” calling it “a hoax.” The story has dominated news coverage for days and threatens Trump’s support among veterans and military members, a key voting bloc.

“There’s nobody that has more respect for not only our military but for people that gave their lives in the military,” Trump said.

Biden cited the alleged remarks Monday while campaigning in the electoral battleground state of Pennsylvania.

Referring to his son Beau Biden, who served in Iraq as a member of the Delaware National Guard and died of brain cancer in 2015, he said “Beau wasn’t a loser or a sucker,” adding: “He served with heroes.”

Biden’s visit to Pennsylvania on Monday kicked off a flurry of travel to battleground states this week by both Biden and Trump as some opinion polls showed the race tightening with less than 60 days to go until the November 3 election.

With the coronavirus pandemic and civil unrest over racism and police brutality commanding attention in recent months, Biden is seeking to maintain his edge by painting the Republican president as an ineffectual leader who thrives on chaos and has left the working class behind.

Trump has struggled to change the contours of the campaign despite highly charged rhetoric on racial polarization and “law and order” intended to motivate his base and draw new supporters in suburban parts of key swing states, such as Pennsylvania, Wisconsin, and Michigan.

The 2 also sparred on the economy

Biden met with union leaders in Harrisburg, the Pennsylvania capital, and spoke virtually with the leader of the largest federation of US labor unions, the AFL-CIO’s president, Richard Trumka. He also took questions from union workers and met earlier in the day with union members who served in the US military.

Biden promised to be the “strongest labor president” in the history of the country, vowing to hold executives legally accountable if they interfere with union organizing and to raise the minimum wage and strengthen the National Labor Relations Board.

“Folks have figured out that it’s not the financial wizards of Wall Street that make this country run. It’s you, the essential workers,” Biden said during the virtual event with Trumka.

Trump said that if Biden were elected, the Democrat would mandate another economic shutdown to deal with the coronavirus pandemic.

“Biden’s plan for the China virus is to shut down the entire US economy,” Trump said. “He’d be laying off tens of millions of workers and causing countless deaths from suicide, substance abuse, depression, heart disease, and other very serious illnesses.”

Trump plans to visit North Carolina, Florida, Michigan, and Pennsylvania later in the week, all considered crucial to both candidates’ chances of victory.

Polls in Pennsylvania, which Trump won narrowly in 2016, have consistently put Biden in the lead, but averages show that margin narrowing to roughly 4 to 5 percentage points, down from about 8 points in late June. Biden is scheduled to be back in Pennsylvania on Friday.

News DSMW - July 29, 2021
0
Americans are used to hearing about what a great country they live in—how lucky they are to have been born in, or to have immigrated to, the United States. “American exceptionalism”—a phrase, funnily enough, coined by Joseph Stalin—is an idea that, on the whole, is still embedded in the country’s collective...

News DSMW - July 29, 2021
0
It may end up taking 30 years—but Waterworld could finally get the sequel it so desperately wanted. Collider reports that a streaming TV show take on the infamous 1995 Kevin Costner film is now in the works, which would pick up the story in that film 20 years after its ending....

Commentary Kevin Williamson - July 29, 2021
0
When your local knucklehead Marxist talks about the ‘decadence of Late Capitalism,’ this is what he is talking about: buying stuff on eBay to sell it on eBay. ...
MORE STORIES

Corporate America Is Building Its Own Surveillance State. Will the FTC...