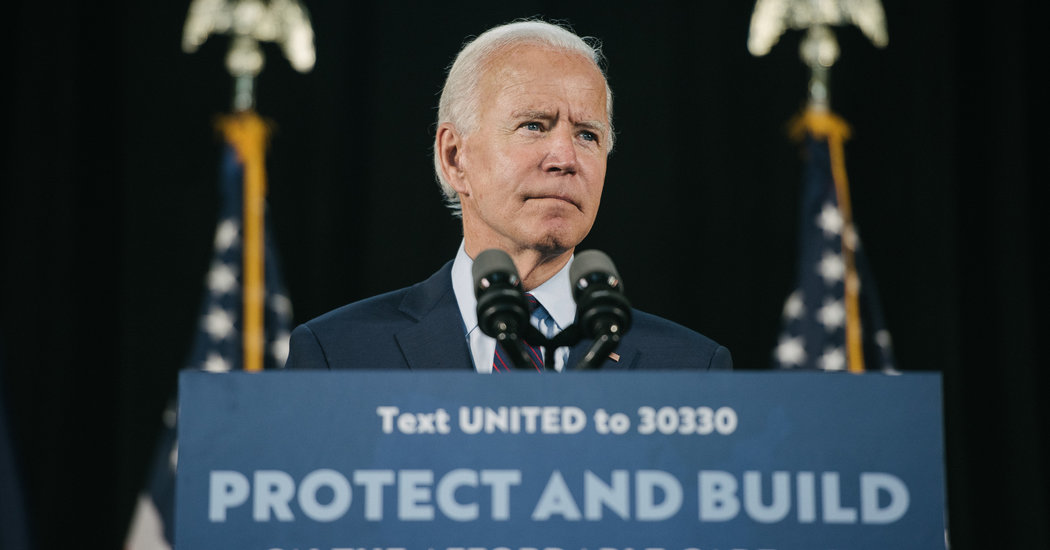 Joseph R. Biden Jr. will propose on Thursday a $300 billion increase in government spending on research and development of technologies like electric vehicles and 5G cellular networks, as part of an effort to more aggressively challenge President Trump on economic policy.

Mr. Biden’s announcement will come at a speech in Pennsylvania that will be the first of several steps to detail an expanded economic agenda, beyond what he proposed in the primaries, to invest in American manufacturing and to reduce racial wealth gaps, aides said on Wednesday evening. Mr. Biden, now the presumptive Democratic presidential nominee, will also call for directing an additional $400 billion in federal procurement spending to products that are manufactured in the United States, aides said.

Mr. Biden’s campaign is riding high in the polls but his advisers, as well as Republican strategists, still see the economy as perhaps the area of greatest vulnerability against Mr. Trump. The president’s campaign — and the president himself when on message — has tried to argue that he oversaw a booming economy until the coronavirus pandemic brought about an “artificial” slowdown. Recent polls show the economy as an enduring strength for the president, even as Mr. Biden outpaces him over all, both nationally and in battleground states.

Aides also said that Mr. Biden, the former vice president, would propose additional deficit spending next year to help the economy recover from the recession caused by the pandemic, building on the more than $3 trillion in new borrowing that Congress and Mr. Trump have already approved amid the crisis.

Mr. Biden has thus far proposed to offset the entirety of his spending plans with nearly $4 trillion in tax increases, largely by reversing some of Mr. Trump’s signature tax cuts for high earners and otherwise raising taxes on the wealthy and corporations. Aides said he would do the same with his procurement and research plans.

Mr. Biden proposed the smallest amount of new federal spending among the major Democratic contenders during the presidential primary race, and his plan, despite its new spending, remains far less expensive than those proposed by his former rivals, like Senators Bernie Sanders of Vermont and Elizabeth Warren of Massachusetts.

Senior Biden officials repeatedly emphasized that their new plans were “bold” in a conference call late on Wednesday. Mr. Biden has sought to straddle the line on economic policy and elsewhere between his moderate political instincts and a progressive wing of the party that lined up in the primaries behind candidates, like Mr. Sanders and Ms. Warren, who promised sweeping and systemic change.

Earlier on Wednesday, a Biden-Sanders “unity task force” published 110 pages of platform recommendations, including plans on the economy. Its recommendations included more sweeping proposals than Mr. Biden has embraced in the campaign, including a New Deal-style federal jobs program to use government funds to put Americans to work on infrastructure and other projects. The recommendations also included a so-called baby bonds proposal that would seek to reduce wealth disparities between Black and white Americans by giving every child in the country a government-funded savings account.

Mr. Biden is planning four rollouts ahead of the Democratic National Convention in August on his plans to “mobilize the American people” for challenges in a future Biden administration. The speech on Thursday is the first in the series.

The next three, according to a campaign document, will be on “modern infrastructure and an equitable, clean energy future,” then a plan “to build a 21st-century caregiving and education work force” followed by a plan “to advance racial equity in America.”