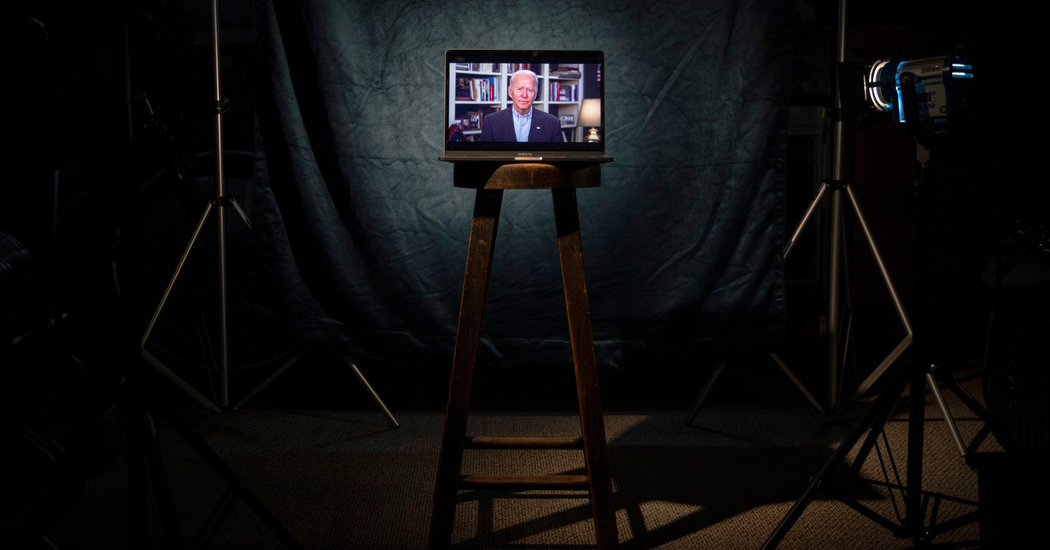 WASHINGTON — Former Vice President Joseph R. Biden Jr. on Tuesday morning rejected the notion that he is “hiding” at his Delaware home amid the coronavirus pandemic, arguing that he is complying with public health guidelines and declaring that he is “winning” against President Trump.

Mr. Biden has faced mounting concerns from Democratic donors, former Obama administration officials and aides to former 2020 primary rivals that his from-the-basement campaign has left him far less visible to American voters than Mr. Trump. Many of these allies argue that, while Mr. Biden leads Mr. Trump in many current polls, the presumptive Democratic nominee and his campaign need to become more nimble and creative against a president who dominates attention through televised appearances and use of social media.

“Everybody says, you know, ‘Biden’s hiding,’ but I tell you something, we’re doing very well,” Mr. Biden said. “We’re winning, if you look at all the polling data. I’m not saying that’s going to last until November, I don’t know, but right now the idea that somehow we are being hurt by my keeping to the rules and following the instructions that are put forward by the docs is absolutely bizarre.

“I reject the premise that somehow this is hurting us,” he said. “There’s no evidence of that.”

Mr. Biden said he is following guidance put forward by health officials such as Dr. Anthony Fauci, the nation’s top infectious disease expert, who planned to say at a Senate hearing Tuesday that Americans would experience “needless suffering and death” if the country opens up prematurely. The former vice president condemned Mr. Trump for defying public health officials’ calls to wear face masks around other people to mitigate the spread of the coronavirus.

“I’m getting really frustrated with, not you, but this, the whole notion that somehow we can just open, we can move,” Mr. Biden said. “I’m anxious to go out and campaign, George, you know, when I campaign I’m usually the first one there and the last one to leave. I enjoy interfacing with people. I’m not trying to avoid it but I’m trying to set an example as to how we should proceed in terms of dealing with this health and economic crisis.”

During the interview, Mr. Biden also criticized Mr. Trump for his repeated and false assertions that any American who wants to be tested for the coronavirus can be tested.

“The truth is, George, anyone can’t get a test around the country,” Mr. Biden said. “It’s a fantasyland that he’s talking about.”

Mr. Biden declined to offer an opinion about Mr. Trump’s Justice Department dropping charges against Michael T. Flynn, the former Trump national security adviser who had pleaded guilty to lying to the F.B.I. about conversations he had with Russian officials. He said the president’s focus on Mr. Flynn is a “diversion” to distract people from the coronavirus pandemic.

“Can you imagine any other president of the United States focusing on this?” Mr. Biden said, referring to the Flynn case.