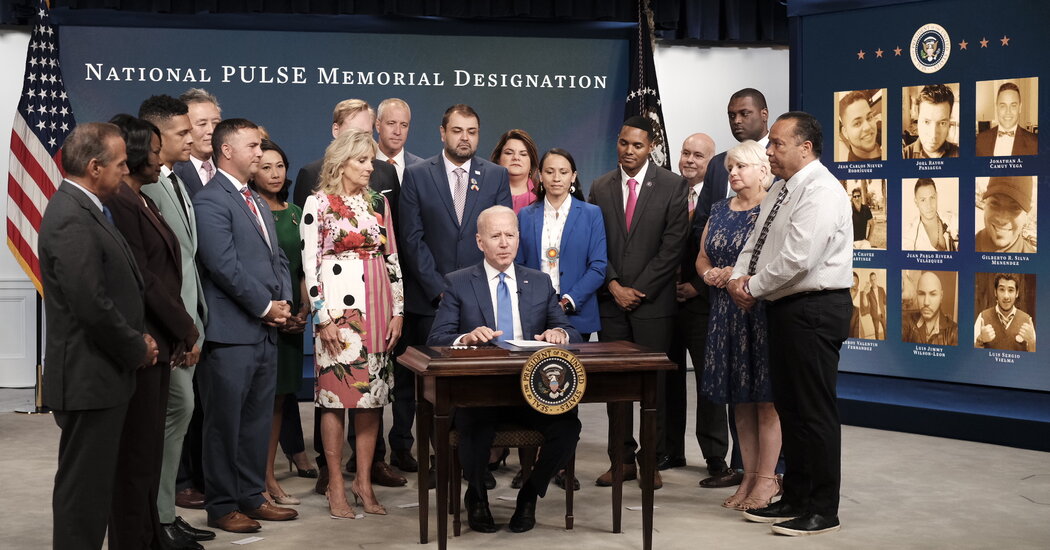 Honoring Pride Month at the White House on Friday, President Biden signed a law to designate the site of Pulse, a gay nightclub in Florida where a gunman killed 49 people and wounded dozens in 2016, as the National Pulse Memorial.

The legislation, which will transform the former site of the popular club into a permanent memorial with a reflecting pool, was adopted by Congress earlier this month.

In remarks at a ceremony after the signing, Mr. Biden also denounced state legislatures across the country that are working to limit the rights of lesbian, gay, bisexual, transgender, queer and questioning individuals.

“These are some of the ugliest, most un-American bills I’ve seen, and I’ve been here a long time,” he said. “This is no more than bullying disguised as legislation.”

Since taking office, Mr. Biden has sought to restore civil rights protections for L.G.B.T.Q. people that were eliminated by his predecessor, Donald J. Trump. On his first day as president, Mr. Biden signed an executive order that combats discrimination on the basis of gender identity or sexual orientation.

Last week, the Department of Veterans Affairs said that it planned to start offering gender confirmation surgery to transgender veterans, a major shift in the care available for former service members.

The Biden administration has also noted that 14 percent of the president’s appointees identify as lesbian, gay, bisexual, transgender or queer. Pete Buttigieg, the transportation secretary, was the first openly gay cabinet secretary confirmed by the Senate, and spoke on Friday at the White House. Dr. Rachel Levine, the assistant secretary for health in the Department of Health and Human Services, was the first openly transgender federal official to be confirmed by the Senate.

At a ceremony on Friday, Mr. Biden also said he was appointing Jessica Stern as a special envoy at the State Department who will work to advance human rights of “LGBTQI+ persons.” The position was created during the Obama administration but left vacant for the past four years under Mr. Trump. Ms. Stern currently serves as the director of OutRight Action International, an advocacy group.

The State Department will fly the “Progress” flag — which combines the rainbow Pride flag with colors representing transgender rights, people of color and people with H.I.V. — outside its headquarters this weekend.

“We must protect the gains we’ve made and fend off the cruel and unconscionable attacks we’re seeing now,” Mr. Biden said, “to ensure that everyone enjoys the full promise of equality and dignity and protection.”