Former Vice President Joseph R. Biden Jr. has an opportunity and a challenge: He is the presumptive nominee for president taking on an incumbent weighed down by a public-health disaster and a resulting deep recession.

But first, he has to get past the birds.

The birds twittered up a storm during a May 8 address on the economic crisis, as he livestreamed from his Delaware home, where the Covid-19 pandemic has marooned him. They whistled through his remarks to a “virtual rally” aimed at voters in Florida. They honked, from a pond near his house, through a speech to the Asian-American and Pacific Islanders (AAPI) Victory Fund.

Not since Tony Soprano and his ducks has a media figure’s circumstances been so enmeshed with the fowl in his backyard. Running a general election campaign that began almost immediately as shelter-in-place policies fell into place, Mr. Biden has suddenly found himself, late in life, trying to adapt from his beloved retail politics to unsatisfying e-tail politics.

Like the nation that he is running to lead, Mr. Biden is discovering the limits of teleconferencing: clunky pacing, glitchy audio and unwanted interruptions, from an iPhone ringtone drowning out part of his AAPI speech to what sounds like the horn of a passing train inadvertently illustrating a speech section referencing mass-transit workers.

Mr. Biden, speaking straight to camera, lacks the off-the-cuff energy he can get in front of a crowd. There are none of the trademark embellishments — “Folks!” “I’m serious!” It’s enough to make you miss the white-knuckle Biden speaking style that made every debate answer a perilous journey.

That Biden, after all — schmoozing, empathizing, gaffe-making, touching, maybe overtouching — was all about being there and showing up. Sheltering in place with only a planter of impatiens for a wingman, he delivers speeches that feel like they want the reaction of a crowd. (“Have you heard that before? Well, we’re not buying it.”) He has not managed, as any successful YouTuber learns, to self-generate the ardor and enthusiasm that you imagine in your audience.

That disorienting Zoomosphere feeling is a problem because so much of politics is about place — courting electoral votes, making physical pilgrimages. The Biden campaign has tried to compensate with “virtual rallies,” which raise a kind of existential question: What does it even mean to be “in” Tampa from a house in Delaware?

A May 7 event tried to answer that, and the results were like a “Saturday Night Live” sketch. A Florida Democratic official introduced the candidate over a shaky connection — “He’s running to rebuild the American middle class and make sure this time ev[glitch]body c[glitch] [glitch]lo[glitch].” A local high school student led the Pledge of Allegiance in front of a set of home window blinds. A D.J. spun “Ain’t No Stopping Us Now” onscreen and, as if to prove the song’s point, kept it going for almost three minutes.

Campaign rallies are often front-loaded with preliminaries and testimonials from area bigwigs. But what was barely tolerable filler in person is a “Close Tab” prompt online. A May 20 rally aimed at Milwaukee, Wis. (“Not to be cheesy but it’s going to be a Gouda time!” promised the website) was tighter, getting to Mr. Biden’s speech within 15 minutes, but with only 2,400 viewers streaming, according to the online counter.

Mr. Biden can be more animated in his remote interviews, where there is someone on the other end to play off of. In a Thursday interview with Stephen Colbert, he misted up connecting his own history of loss (his wife and daughter in a car crash and his son Beau to cancer) to the mourning in families across the country.

It recalled, despite the distance, his memorable 2015 interview with Mr. Colbert shortly after his son’s death — as well as the current president’s allergy to expressing anything like empathy or grief. 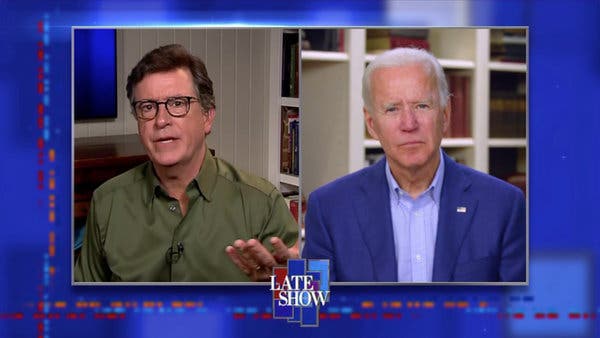 In an interview with Stephen Colbert on Thursday, Mr. Biden connected his own history of loss to families who have suffered during the pandemic.Credit…CBS

But an interview with the radio host Charlamagne Tha God the next morning was much rougher. After giving several defensive answers on his legislative record, marijuana legalization and the possibility of a black female running mate, the candidate said, “If you have a problem figuring out whether you’re for me or Trump, then you ain’t black.” (Not pictured: the aide, heard offscreen, who came within inches of getting Mr. Biden off air before making the comment.)

For now, Mr. Biden is running against an opponent with a near-monopoly on the airwaves. Just as the 2007-08 TV writer’s strike salvaged Mr. Trump’s career by clearing a time slot for “The Celebrity Apprentice,” the president again finds himself one of the few people able to generate television content.

Only Mr. Trump gets to move about in the physical world, holding briefings, visiting an auto plant in Michigan and a medical-equipment center in Pennsylvania. He may self-immolate regularly, dispensing don’t-try-this-at-home medical advice and going maskless in Pennsylvania while the loudspeaker cranked “Live and Let Die.” But TV has a bias toward things that look like TV — high-definition images, people interacting with people — and this he can provide.

Even Mr. Biden’s onetime boss, Barack Obama, has an advantage. His elliptical criticism of President Trump in a prime-time commencement address generated more news than any recent direct attack from Mr. Biden. Of course, the political re-entry of a former president is inevitably news — but also, it happened in front of millions of viewers on multiple networks.

Mr. Biden, meanwhile, has to exist in the same limbo that nearly everyone does, even Hollywood celebrities, videophoning it in with a bookshelf backdrop. It sets a public-health example. (He made a point of beginning his Colbert appearance wearing, then removing, a mask, the same day the president pointedly did not wear a mask before cameras in Michigan.)

But if, come summer and fall, Mr. Trump is holding rallies, the same things that might make them questionable from an epidemiological standpoint will give TV news producers what they crave: crowd dynamics and images at large scale.

To be clear: The low media profile has not provably hurt Mr. Biden, who has maintained a lead in poll averages. For all we know, it may be helping him, part of his unspoken pitch being the promise of relative quiet after four years of a presidency whose dials go up to 11. (“The more he talks, the better off I am,” Mr. Biden told Charlamagne, in defense of being “MIA” in the media during the pandemic.)

Also to be clear: Mr. Biden should get media coverage because he is the presumptive challenger for president in a time of unprecedented national crisis, not because he has put on a sufficient show.

But if his campaign is holding public events, the purpose is not to get less attention. “It’s often said that crisis reveals character,” Mr. Biden said in his Tampa rally speech. It also reveals one’s creativity and ability to adapt to drastic changes.

That means finding a way to make a challenger’s argument — “Here’s what you’d be getting if I were president right now” — in a way that virtually imagines a virtual presidency. Mr. Biden’s campaign has been able to create blistering ads. It hasn’t, yet, found ways to recreate the kinds of warm encounters he thrives on in the real world:

In the meantime, the vice president is a disembodied presence without a clear audience, as at a May 14 remote round-table discussion with three Democratic governors on the coronavirus response, which was interrupted at one point by passionate honking. “Those Canadian geese are trying to get away from the virus!” Mr. Biden said.

Say whatever you want about the geese, but they know how to make themselves heard.