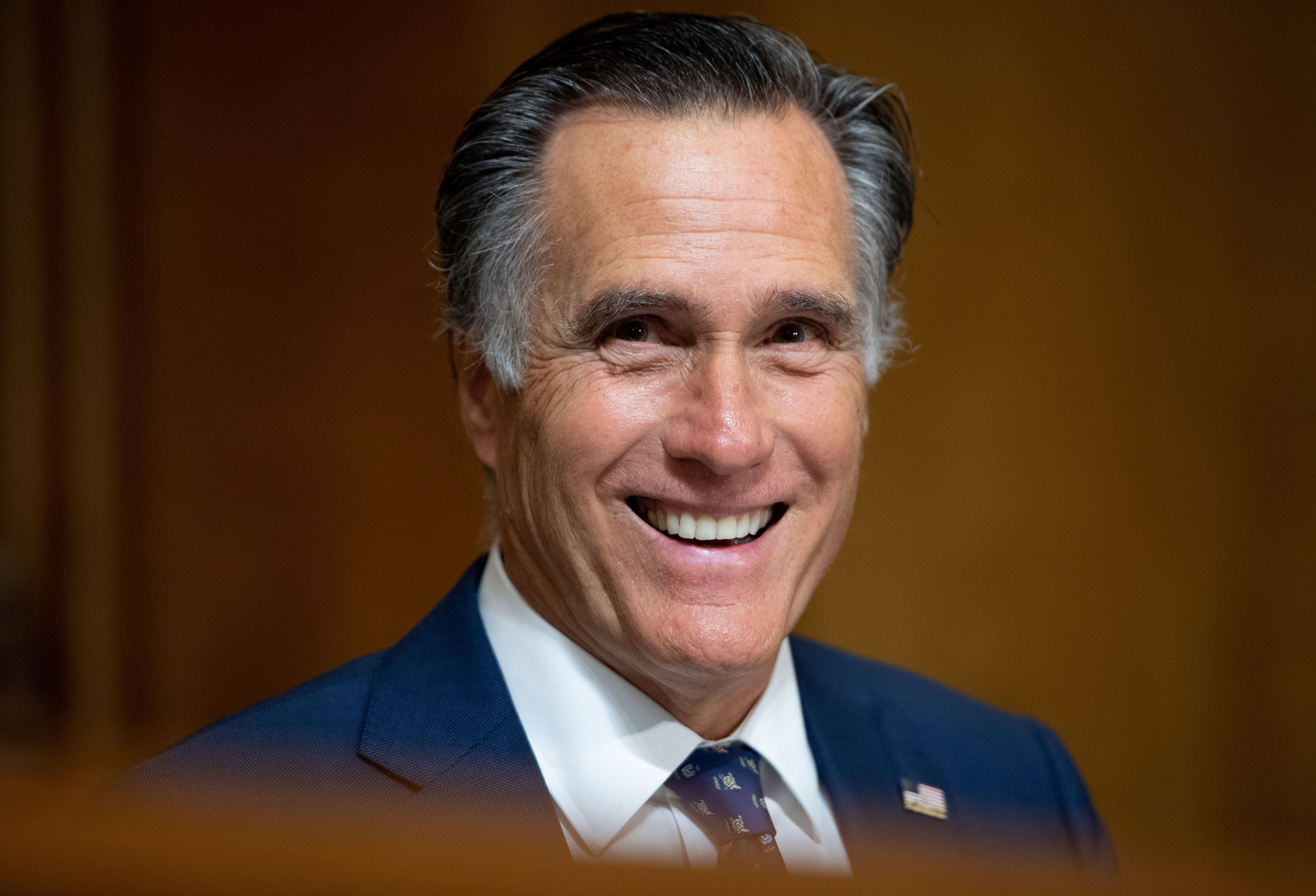 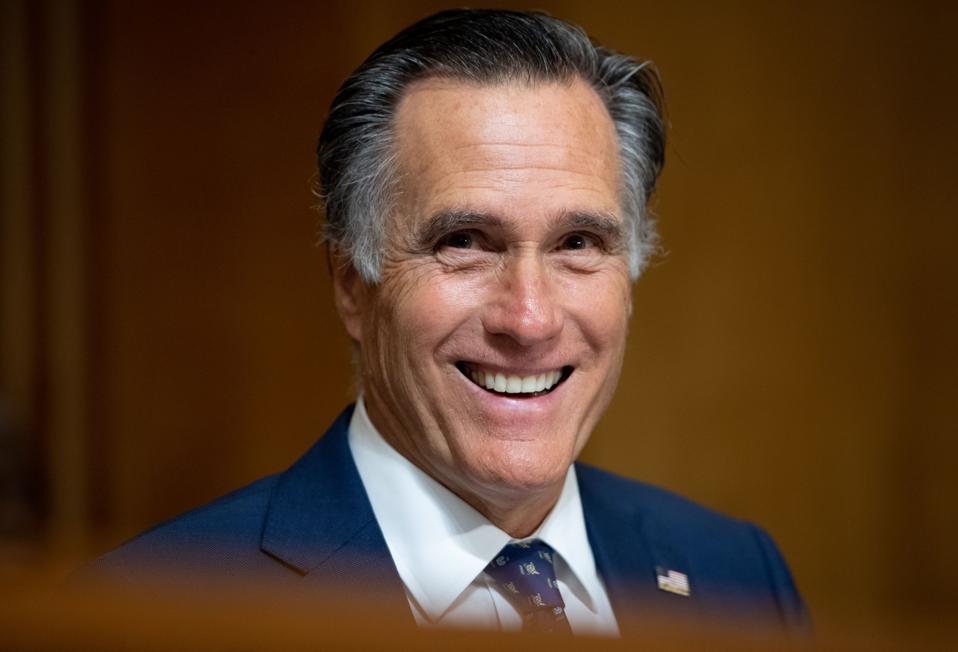 A bipartisan group of Senators, including Mitt Romney, is set to unveil a $908 billion stimulus … [+] package proposal that excludes a second $1,200 stimulus check and cuts federal unemployment benefits to $300 per week.

It was only two months ago that Nancy Pelosi and Steve Mnuchin were negotiating a potential stimulus package of roughly $1.8 trillion. While most Senate Republicans had adamantly opposed such a large relief bill, there was hope that if Democrats and the White House could compromise, President Trump could cajole enough intransigent Senators to get an agreement over the finish line. Sadly, neither side was willing to budge on the last mile details and negotiations disintegrated heading into the November election.

Today, a centrist group of Senators unveiled a new proposal to break the partisan impasse in an attempt to secure much needed funds for millions of Americans; however, despite the impending expiration of many stimulus programs and signs of a economy weakening, the new bipartisan bill is almost $900 billion less than the agreement that Pelosi and Mnuchin had almost reached. Most notably, the new proposal excludes a second round of stimulus checks and cuts extra federal unemployment benefits down to $300 per week. Did our elected officials squander an opportunity to secure a more generous stimulus package in October or is the new proposal simply a short-term emergency plan to bridge the U.S. until January?

The proposal unveiled today was negotiated by a group of centrist Senators included Joe Manchin III (D- West Virginia), Mitt Romney (R-Utah), and Susan Collins (R-Maine). It includes a renewal of enhanced federal unemployment benefits for four months, but at a rate of only $300 per week, half the rate in the original CARES Act stimulus passed in late March. Additionally, it excludes a second round of stimulus checks to millions of Americans. The proposal includes $160 billion in funding for state and local governments and a six-month moratorium on coronavirus-related lawsuits, provisions that may appeal to Democrats and Republicans, respectively.

Additional provisions of the potential package include:

It is striking how much lower the latest proposal is not only from the agreement nearly reached by Pelosi and Mnuchin, but also from an earlier bipartisan proposal floated by the Problem Solvers Caucus.

Mnuchin had offered Pelosi a $1.6 trillion package that included not only a second round of stimulus checks, but also a renewal of extra federal unemployment benefits at a rate of $400 per week (albeit for only three months). His offer also included $250 billion in state and local government aid, more than the new proposal as well as $75 billion for testing and tracing, and $75 billion for vaccine development and distribution.

Similarly, the $1.5 trillion bipartisan proposal by the Problem Solvers Caucus included a second round of checks, an even higher rate of unemployment benefits ($450 per week, but capped at 100 percent of a person’s wages), and $500 billion in aid for state and local governments.

If there was a bipartisan proposal for $1.5 trillion, why is the new proposal substantially lower?

A Lot Has Changed In Two Months

The need for additional stimulus relief has only grown recently. The labor market is showing signs of strain with more Americans filing for unemployment benefits and states implementing renewed lockdowns and restrictions given the surge in coronavirus cases.

Moreover, several stimulus programs that had provided relief to unemployed workers are schedule to expire shortly; 7.3 million people are estimated to lose benefits when the Pandemic Unemployment Assistance ends, according to a study by the progressive Century Foundation authored by Andrew Stettner and Elizabeth Pancotti. Similarly, 4.6 million additional individuals would lose access to the Pandemic Emergency Unemployment Compensation program too. These programs are “the last lifelines available to millions of Americans in desperate need,” Stettner told The New York Times. “It will be a crippling end to one of our darkest years.” Given these headwinds, passing a new stimulus package is crucial to support millions of Americans and the broader economy; if anything, they point to the desperate need for a larger package.

A counteracting force, however, is the result of the November election, specifically Donald Trump losing his re-election bid. Trump was the x-factor in earlier stimulus discussions often tweeting that he wanted to “go big” on stimulus and telling Rush Limbaugh, “I would like to see a bigger stimulus package than either the Democrats or Republicans are offering.” Since the election, Trump appears to have lost interest in stimulus discussions, taking wind out of the larger stimulus package’s sails.

Whether Trump would have been able to ram a close to $2 trillion stimulus package through the Republican-led Senate in October is unknown. But the likelihood of that happening now is much lower. Moreover, the U.S. will have a divided Congress at least until President-elect Joe Biden is inaugurated in late-January and for the next two years, unless the Democrats can gain control of the Senate.

The New Reality In Washington

Any hopes of passing a stimulus package in 2020 will, therefore, require direct compromise with Senate Republicans. Given this new reality, the anchoring offer for a relief bill that can pass the Senate may be the last Republican proposal, which came in at under $500 billion. The so-called “skinny bill” excluded a second round of checks and additional state aid, but included a $300 per week extension of federal unemployment benefits.

Centrist Senators today framed their proposal as an interim bill meant to provide an emergency bridge until 2021. “This is a COVID emergency relief framework,” Senator Manchin said. “It’s not the time for political brinkmanship. … This is going to get us through the most difficult times.” Similarly, Senator Lisa Murkowski (R-Alaska) noted that the bill is a compromise. “It’s been said, this is not what everybody would wish. People are going to look at these buckets and they’re going to say, ‘Well, my bucket isn’t there,’ or ‘My bucket is only half full.’ Well, this is… emergency relief. This is designed to get us through this next quarter,” she noted.

The implicit assumption in Manchin and Murkowski’s statements is that Congress will come together in 2021 and pass another stimulus bill. The likelihood of that will depend on several factors, including the results of the two Senate runoff elections in Georgia, but is far from a sure thing. Therefore, if the new proposal actually passes, which is far from certain, it may not be a bridge, but rather an end-point.

The new stimulus package proposal is substantially lower than previous bipartisan offers, but it is also much higher than another number: zero. That is the amount of incremental stimulus that appeared likely to be doled out in 2020 given the logjam in Washington. Given the weakening economy and expiring unemployment programs, passing immediate emergency relief is prudent. But the question remains, did the politicians squander a golden opportunity in October to deliver close to $2 trillion in aid to Americans?