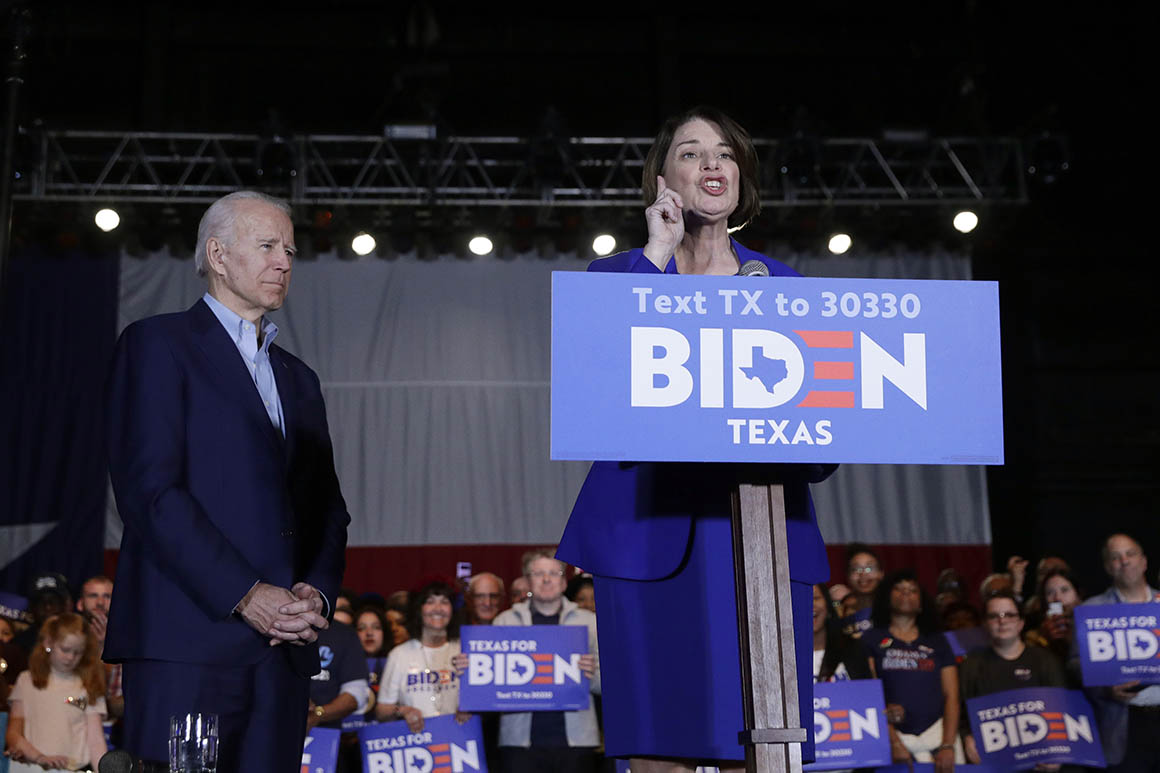 It’s not yet clear how much the opposition of activists matters to Biden. He’s made clear that the electoral politics of his pick matter less than choosing someone who can be a governing partner and step into the top job without worry.

But the vocal contingent of African American and Latino detractors — many of whom said they would prefer Biden to select a black woman as a running mate — is unique to Klobuchar; Elizabeth Warren, another top contender for VP, doesn’t elicit similar antagonism from communities of color.

“It comes from her performance in the primary — her weakness in being able to motivate them,” said Adrianne Shropshire, executive director of BlackPAC, who supports several potential vice presidential selections. “The engagement and the enthusiasm of black voters is going to be a difference-maker in this election, and the concerns about her in this role stem from the degree to which she resonated or not with those core constituencies.”

But for many of these operatives, Klobuchar symbolizes a strategic division within the Democratic Party: Whether to focus on winning back white, Midwestern voters who flipped to Donald Trump in 2016, or on activating voters of color who were not excited to vote. She “represents that tension,” said Rev. Al Sharpton, who said he’s told Biden that he would prefer a black woman on the ticket but noted he’s “not anti-Amy.”

“It is not her fault, but she is in the middle of an ongoing battle from the last few presidential races,” Sharpton continued, adding he would be “concerned” that selecting Klobuchar would not help energize black and brown voters.

In a Washington Post op-ed this month urging Biden to select a woman of color as VP, seven black strategists and activists called out Klobuchar, warning she would “only alienate black voters.”

“Biden, the presumptive Democratic nominee, does not need help winning white, working-class voters — he serves that function himself,” they wrote. Referring to her record as a chief prosecutor in Minneapolis, they added, “A choice such as Sen. Amy Klobuchar (Minn.), who failed to prosecute controversial police killings and is responsible for the imprisonment of Myon Burrell, will only alienate black voters.”

“If it was important enough to raise in an op-ed, it speaks to how serious we are,” LaTosha Brown, a co-founder of Black Voters Matter and the lead op-ed author, said in an interview. “Her campaign appeal was about bringing in working class, white people from the Midwest, and perhaps that’s true, but that’s a particular strategy that doesn’t align with what it’s going to take to win. You need to excite the base.”

Angela Rye, a Democratic strategist and the former executive director of the Congressional Black Caucus, who also signed the op-ed, called Klobuchar a “non-starter.”

Klobuchar’s boosters counter that Donald Trump will drive out the Democratic base no matter what, and that the key Rust Belt states that Democrats have to win play to Klobuchar’s strengths.

“I think she could help put the upper Midwest in play, and that’s an invaluable asset,” said Minnesota Attorney General Keith Ellison, who backed Bernie Sanders during the presidential primary. He also noted that “there are a lot of black people” in the Midwest, in cities like Detroit and Milwaukee, who will also be key for Democrats in winning back those states.

“I think the base is going to be excited enough because, before, Trump was an idea, now Trump is the reality,” Ellison continued.

Klobuchar has been working to improve her relationships with minority activists and politicians since she dropped out of the presidential race. She endorsed a slate of racially and regionally diverse candidates in down-ballot races. She’s worked with Stacey Abrams, another VP contender, to promote a vote-by-mail bill, which was endorsed by Voto Latino and Rev. Jesse Jackson earlier this month. She also wrote a bill to expand broadband access to studddents at historically-black colleges and Hispanic-serving institutions. And she participating in a virtual town hall hosted by the NAACP on how the coronavirus is disproportionately hurting black and brown people.

During the presidential primary, Leah Daughtry, CEO of the DNC’s conventions in 2008 and 2016, hosted Klobuchar with a group of influential black women leaders, “half she knew, half she didn’t,” and “people walked away with a favorable impression.”

But, Daughtry noted, “building relationships in every area of our lives takes time, including in politics,” and “it isn’t something you can do in a matter of weeks.”

The primary results illustrate the Klobuchar’s failure among voters of color.

In South Carolina, she won 1 percent of black voters, even though they make up a majority of Democratic primary voters in the state. It was the lowest total for any of the presidential candidates on the ballot.

In Nevada, Klobuchar received 4 percent support of the Latino vote, the lowest share of any presidential candidate other than Rep. Tulsi Gabbard. Nationally, Klobuchar regularly polled in the low single digits among voters of color.

“Could she have done more? Absolutely,” said Antjuan Seawright, a South Carolina-based Democratic consultant. “But she knew where her bread was buttered, and that started in Iowa. She was taking the race as it comes.”

Seawright noted that Biden’s own strength in the black community — as evidenced by his resounding victory in South Carolina, which revived his flailing campaign — “gives room for the potential for Amy Klobuchar” as vice president.

The latest election results sent straight to your inbox.

But Biden, too, was recently warned about not taking African American voters for granted. On Friday, he apologized on a conference call with black leaders for comments he made to “The Breakfast Club” radio host: “If you have a problem figuring out whether you’re for me or Trump, then you ain’t black.”

Klobuchar’s prosecutorial record as Hennepin County attorney is another sore spot, particularly her handling of a case involving Burrell, a black teenager. An investigation by the Associated Press found numerous flaws in the case, and civil rights leaders in Minnesota called for her to suspend her presidential campaign.

Klobuchar called for an independent investigation after her campaign ended, a move applauded by the Minnesota NAACP.

If Biden picked Klobuchar as his vice president, “it would add to [his] workload” for the general election, said Daughtry, who signed on to another letter sent to Biden, urging the selection of a black woman.

“There are enough people who either A, don’t know her, or B, have a negative view of her that it becomes another thing the campaign has to do — introduce her and convince communities of color that she’s ok,” Daughtry said. “That’s not impossible, but there’s already a lot of work to do in a presidential race.”