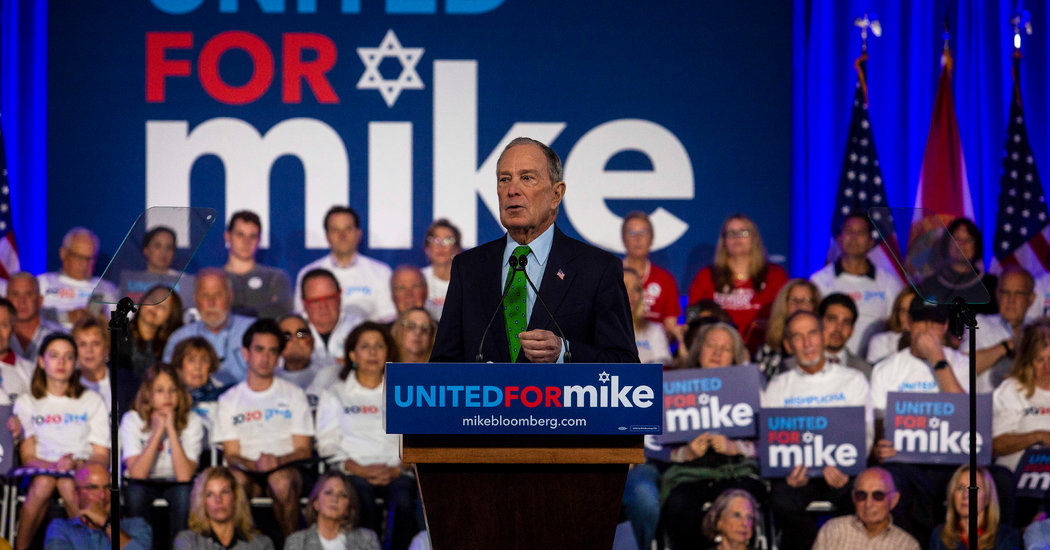 AVENTURA, Fla. — Michael R. Bloomberg on Sunday addressed rising anti-Semitism and spoke personally of his Jewish heritage in a speech at a prominent synagogue near Miami, a sign that courting Jewish voters is core to his strategy of building support in Florida.

The speech was a rare instance of a major address by a Democratic presidential candidate this cycle that specifically confronted the rise in anti-Semitic attacks across the country. He spoke directly to Jewish Americans who may worry that progressive Democratic front-runners have too sharply criticized Israel or who may dislike some of President Trump’s agenda but support his Israel policy.

“The violence that has always threatened Israel is rearing its ugly head here in America, with alarming frequency,” Mr. Bloomberg said.

“The toxic culture the president has created is harming our relationship with Israel,” he said. “If I am elected, you will never have to choose between supporting Israel and supporting our values here at home.”

Mr. Bloomberg not-so-subtly sought to distinguish himself from Senator Bernie Sanders of Vermont, who is also Jewish and who recently took the lead in Iowa, according to a recent New York Times/Siena College poll of likely caucusgoers. Mr. Bloomberg, the billionaire former mayor of New York City, took aim not only at Mr. Sanders’s Israel policy but also at his democratic socialism.

“Now, I know I’m not the only Jewish candidate running for president,” Mr. Bloomberg said in his speech on Sunday afternoon, delivered in a ballroom with a roving blue spotlight and Israeli techno and music by the rapper Pitbull setting the mood. “But I am the only one who doesn’t want to turn America into a kibbutz.” The audience whooped.

The crowd of several hundred people included prominent business figures, former local politicians and many with personal connections to the candidate, some of whom had traveled from New York. Ari Ackerman, an owner of the Miami Marlins baseball team, was among them, having helped to rally young Jewish support for two of Mr. Bloomberg’s mayoral runs.

“Quadrupling funding for religious institutions, creating a Holocaust program in schools so people are educated about what happened, bringing together the presidents of different universities to create a coalition to battle anti-Semitism — this is what he’s talking about,” Mr. Ackerman said.

The speech on Jewish identity was an unusual move for Mr. Bloomberg, a secular Jew who has long not been religiously observant. He has previously turned to his Judaism in competitive campaign moments, as in his 2005 mayoral re-election campaign when he addressed Hasidic Jews in Borough Park, Brooklyn, on a stage dotted with blue balloons that read “Mike the Mensch.”

While Jews make up only about 3 or 4 percent of Florida’s population, they are a critical voting group in the delegate-rich swing state. As his competitors crisscross Iowa, Mr. Bloomberg has instead looked past early voting states in hopes of picking up delegates on Super Tuesday and beyond.

He delivered his words Sunday at the Aventura Turnberry Jewish Center, standing in front of a “United for Mike” sign, the dot of the “i” in his name replaced by a Star of David. Campaign staff members distributed an array of pins and shirts, some emblazoned with “Mishpucha for Mike” (using a Yiddish word for “family”), while platters of black-and-white cookies and rugelach were on hand nearby.

“A Jew can become president,” Philip Levine, the former mayor of Miami Beach, told the crowd as he introduced the billionaire. “And, I’ll tell you something, you’re lucky — it’s not going to cost you money.”

Aventura, a small suburban city near the beach in northeast Miami-Dade County, is known as a hub for politically active Jewish Democrats in the state.

“It is important to talk to a set of people who may not know him as well,” Howard Wolfson, a senior adviser to Mr. Bloomberg, said in a phone interview.

Mr. Bloomberg spoke of personal connections to the Tree of Life synagogue in Pittsburgh, where a man shouting anti-Semitic slurs opened fire in 2018, killing 11 congregants. He also said that while he had initially opposed the Iran deal, he opposed Mr. Trump’s withdrawal from it, and promised to work to end Iran’s nuclear program to protect Israel and the region.

“As president, I will always have Israel’s back,” Mr. Bloomberg said.

Mr. Bloomberg has also long opposed the movement of economic boycotts and sanctions against Israel known as B.D.S., or Boycott, Divestment and Sanctions.

The Democratic presidential candidates across the board have condemned anti-Semitism, especially after the recent attacks in Monsey, N.Y., when five people were stabbed in a Hasidic rabbi’s home during a Hanukkah celebration and an Orthodox Jewish man was stabbed while walking to synagogue. Pete Buttigieg, the former mayor of South Bend, Ind., said his administration would devote $1 billion to combat violent extremism, and Senator Elizabeth Warren of Massachusetts has a plan to fight white nationalism; both of their plans aim to fight anti-Semitism.

But the field as a whole has not addressed the specifics of anti-Semitism enough, said Jonathan Greenblatt, the chief executive of the Anti-Defamation League.

“We are certainly hearing about this issue more than we have before,” Mr. Greenblatt said in a phone interview. But the real question candidates must address is, he said, “How do you move from rhetoric condemning anti-Semitism to real plans rooting it out?”

Many American Jews have found themselves caught in an uncomfortable tension between traditional liberal American Jewish values and Mr. Trump’s alliance with Israel. Mr. Trump, who won 24 percent of Jewish voters in Florida in 2016, according to the Pew Research Center, has also been trying to strengthen his support by making anti-Semitism and backing of Israel a partisan issue.

Mr. Sanders wrote about his Jewish identity, his relatives who were murdered by Nazis and the recent rise of anti-Semitic violence in a personal essay in November for Jewish Currents, a progressive Jewish publication. Unlike Mr. Bloomberg, he criticized what he called “false accusations of anti-Semitism” by Mr. Trump against progressives and called for the end of Israel’s “occupation” of Palestinians.

“We should be very clear that it is not anti-Semitic to criticize the policies of the Israeli government,” he wrote. “We must also be honest about this: The founding of Israel is understood by another people in the land of Palestine as the cause of their painful displacement.”

That position worries some Democratic Jews across the country. “Among the Jews I talk to, Bernie is anathema,” said George Arzt, a political consultant who was press secretary to the former New York mayor Ed Koch. But Mr. Bloomberg’s views, he said, have been “lesser known.”

Evan Ross, a lobbyist and Democratic activist in Miami-Dade County who attended the event, said many Jews in the area had supported Mr. Trump’s Israel policy, even though they disliked much else about his leadership.

“There are people who are really fearful of the possibility that our party could nominate someone more extreme like Bernie Sanders,” Mr. Ross said in a phone interview. “If that happens, we might as well take Florida off the map and hand it to Donald Trump. We need a moderate.”

Patricia Halfen Wexler, a Venezuelan-American who works in venture capital and lives in Miami, said Bloomberg’s centrism made him well-suited to court Hispanic voters. “We’re not a monolith, but Hispanics generally are much more moderate than liberals imagine we are,” she said. “Seeing the trauma of what happened in Venezuela made me realize we can’t be glib about thinking crazy things couldn’t happen here. Bloomberg is by far the one I have the most confidence putting my trust in.”

Debbie Picker, who splits her time between Westchester County and Fort Lauderdale, Fla., said she was disappointed Mr. Bloomberg hadn’t taken questions on Sunday and wanted to know how he planned to elevate his profile in the race.

“We pay attention because we’re Jewish New Yorkers who were there for him for 12 years,” she said. “But if you were to go anywhere outside of the New York Metro and Miami Metro, I don’t think people know him.”