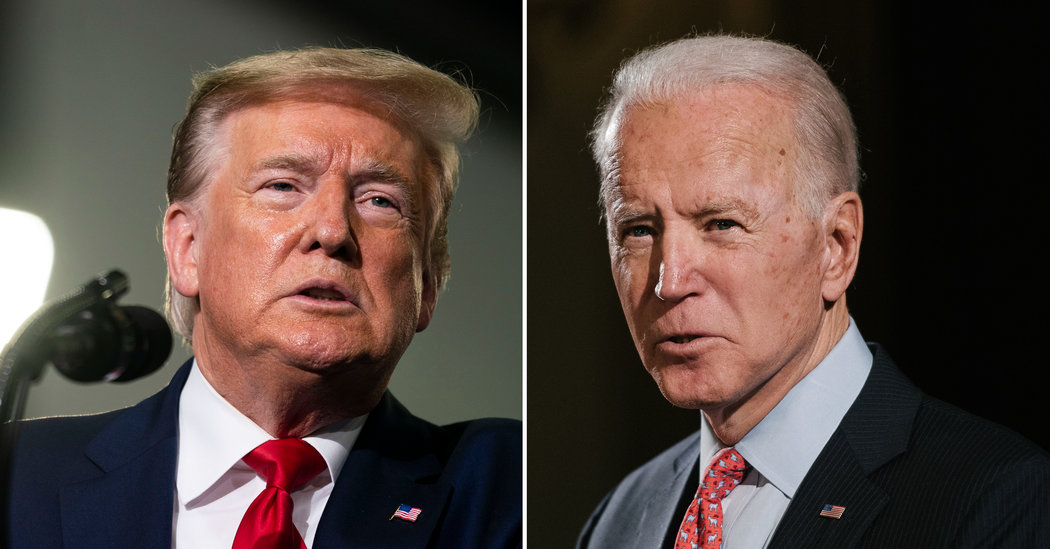 It’s a truism of politics: When you’ve got an incumbent on the ballot, the race will be a referendum on her or his leadership — probably more than it’ll be about what the challenger is offering. So with President Trump’s approval rating stuck deep in the red, there’s little doubt that he is facing an uphill battle.

But there’s a wrinkle to this situation: His likely Democratic opponent, Joseph R. Biden Jr., also has a favorability problem.

Polling suggests that this November’s election could become only the second presidential contest in the history of modern polling in which both candidates are seen negatively by most voters. The other was just four years ago, when pre-election surveys and exit polls found that both Mr. Trump and his Democratic rival, Hillary Clinton, were disliked by a majority of voters.

The fact that so many Americans in both the last election and this one have expressed an aversion to each of the major candidates speaks to the heavy polarization that now defines the national electorate — not to mention the wholesale disillusionment many voters feel with the political system.

As a result, there are large slices of voters whose support is basically predictable. “Elections are becoming more and more about pretty stark partisan divides between Democrats and Republicans,” Guy Cecil, a Democratic strategist who leads the Priorities USA Action super PAC, said in an interview.

But there are specific contours to the negative views this time around that offer insights into the weaknesses that both Mr. Trump and Mr. Biden will need to address as their campaigns enter the summer months.

One key difference between this year and 2016 jumps out: In that election, people who saw both candidates unfavorably broke in favor of Mr. Trump, seeing him as the better of two bad options. This year, Mr. Biden holds an advantage — by a mile — among these ambivalent voters.

In a Monmouth University poll released last week, roughly one-fifth of voters did not express a positive view of either candidate (Mr. Trump’s net favorability rating was -19 in that poll; Mr. Biden’s was -7). Those voters broke hard for Mr. Biden, 59 percent to 18 percent.

In the days immediately leading up to the 2016 election, a Monmouth survey had found an even greater share of voters — 34 percent — saying they did not like either Mrs. Clinton or Mr. Trump. In that poll, Mrs. Clinton had a slimmer edge over Mr. Trump among those voters. After the election, exit polls and other postmortem polling found that they had in fact swung hard in Mr. Trump’s favor, with many changing their minds at the last minute.

Thanks in large part to those voters, he squeaked by with an Electoral College victory, even though more people actually said they disliked him (60 percent) than said they disliked Mrs. Clinton (55 percent), according to exit polls.

The picture this year is different. Americans’ views of the president have hardened in place, and far fewer who dislike him are likely to vote for him again.

“If you’re a Trump voter, you don’t like him — you love him,” Frank Luntz, a veteran Republican pollster, said in an interview. “And nothing said by cable news or media is going to change that.”

He added, “But in the end, if you don’t like him, you’re just as passionate.”

Indeed, few voters express a mild view of Mr. Trump. In the Monmouth poll, 48 percent of the country had a “very unfavorable” view of him, while just 9 percent had a “somewhat unfavorable” opinion.

For Mr. Biden, that wasn’t the case.

And while Mr. Trump’s ratings have stayed relatively stable, Mr. Biden’s favorability numbers have been more fluid. Until last summer, most Americans held a positive view of the former vice president; it was only when his presidential run heated up that his favorability rating began to dip into negative territory, partly the result of attacks from his Democratic rivals.

In the early spring, as it became increasingly obvious that Mr. Biden would become the presumptive nominee, his average favorability ticked up, but it has since dropped again in most polls.

An average of five high-quality telephone polls taken last month found his favorability stuck just below even, with 45 percent holding a positive view of him on average, and 46 percent negative.

Most Democrats and Republicans continue to express a positive opinion of their party’s presumptive nominee. But while Mr. Trump enjoys his strongest support from Republicans and conservatives, Mr. Biden continues to struggle among certain key components of the Democratic base. One-third of liberals said they saw Mr. Biden unfavorably, according to the latest Monmouth poll, and only 19 percent of them said they held a “very favorable” view of him.

By contrast, Mr. Trump enjoyed some of his strongest support from conservative voters, most of whom saw him very favorably.

And among young people, typically a Democratic strong suit, Mr. Biden’s numbers remain anemic months after Senator Bernie Sanders — his main rival for the Democratic nomination, who had the loyal support of most young voters — left the race. Fifty-nine percent of Americans under 35 said they saw Mr. Biden negatively, per Monmouth. Only 8 percent expressed a very positive view of him.

Young people were particularly dissatisfied with their options: Those under 35 made up half of all the voters who saw neither candidate favorably.

All of this bodes poorly for Mr. Biden’s ability to excite his base — and indeed, 32 percent of Democrats in that poll said they were less enthusiastic than usual about voting in this year’s election. Among Republicans, only 12 percent said so.

But Mr. Trump’s inability to win over voters closer to the political middle could be a far graver problem than Mr. Biden’s mushy support on the left. Most political moderates tend to say they like Mr. Biden, and his net favorability rating among this group was +14 in the Monmouth poll.

Mr. Trump, on the other hand, is viewed quite negatively by most of those middle-path voters. Fully 57 percent of moderates expressed a “very unfavorable” view of him in the Monmouth survey; over all, his net favorability rating among them was -39.

“It’s not that they embrace or like Biden, so much as that they dislike Trump,” Mr. Luntz said of these voters in the middle. “They dislike Trump, and they’ve not made up their minds about Biden, because he was not a likely nominee as recently as 90 days ago.”

The latest Quinnipiac University poll contains evidence that Mr. Biden has room to grow. Unlike most, that survey offered respondents the option to say they hadn’t heard enough to make up their minds on whether they saw him favorably or unfavorably. Twelve percent of respondents said they needed more information about Mr. Biden before they decided. Just 3 percent said so about Mr. Trump.