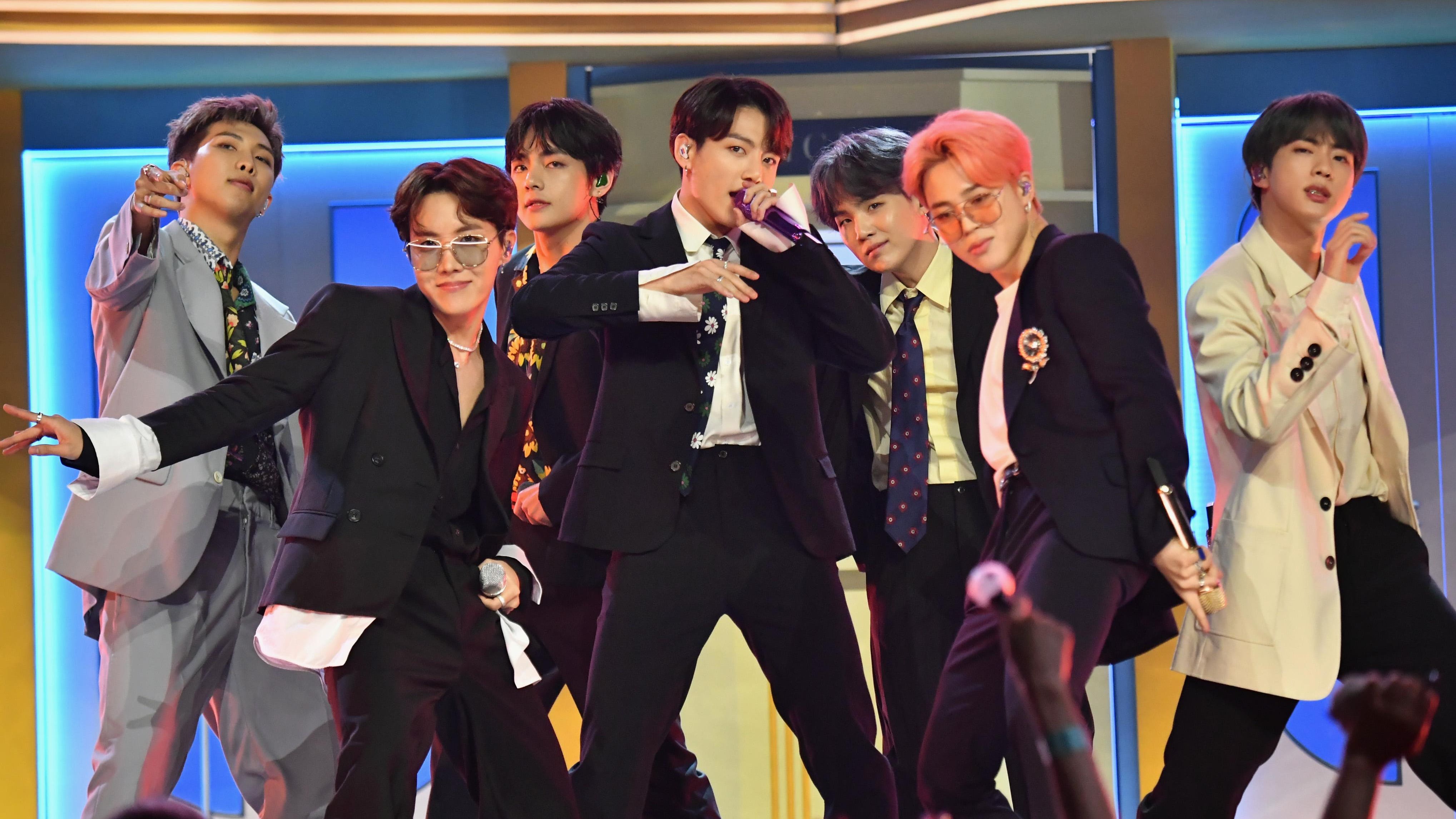 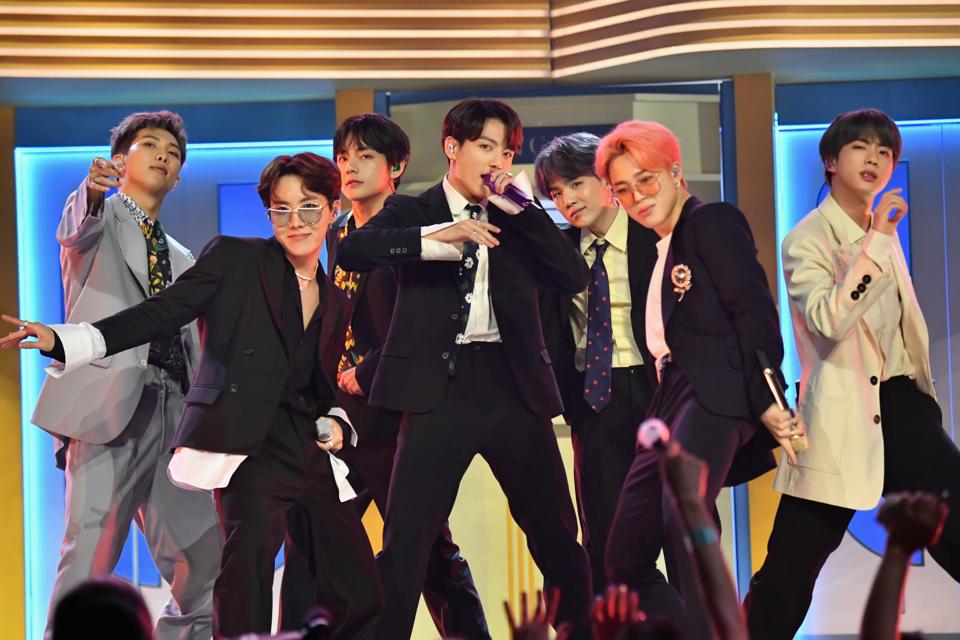 BTS is now in the business of blocking themselves from the top spot on the Billboard Hot 100.

The Korean pop septet launched to No. 1 on the singles chart this week alongside Jason Derulo and Jawsh 685 with the new “Savage Love (Laxed – Siren Beat)” remixes (one vocal and one instrumental), with their former chart-topper “Dynamite” claiming the No. 2 spot. “Savage Love” also topped the Billboard Global 200, making BTS the first act to earn multiple No. 1 hits on the new chart. The superstar boy band also becomes the fifth group to ever occupy the top two spots on the Hot 100 simultaneously, joining a prestigious club that includes the Beatles, the Bee Gees, Outkast and the Black Eyed Peas.

MORE FROM FORBESBTS’s ‘Dynamite’ Holds Steady At No. 1, Proving That Chart-Topping Hits Are Their New NormalBy Bryan Rolli

The chart-topping success of “Savage Love” is an astonishing, multicultural achievement on numerous levels. It’s a well-earned victory for Jawsh 685, born Joshua Nanai, whose “Laxed – Siren Beat” became a TikTok phenomenon earlier this year. The 17-year-old New Zealander’s stage moniker is an homage to his Samoan and Cook Island roots, as “685” is the Samoa calling code, and his song is a sendup to the “siren jams” that are customarily blasted from car or bike speakers in New Zealand and other Pacific Island regions. Derulo caught flak in May when he sampled “Laxed – Siren Beat” on TikTok without receiving clearance or crediting Jawsh 685, and people feared the nascent producer would have his contributions erased as the song continued to build momentum. Instead, the Polynesian teen collects his first No. 1 hit on the Hot 100 this week alongside a South Korean boy band, a delight that’s on par with the ebullient chorus to “Savage Love.”

MORE FROM FORBESBTS Didn’t ‘Cheat’ Their Way To No. 1 On The Hot 100. They Just Beat Other Artists At Their Own Game.By Bryan Rolli

BTS, meanwhile, continues to fulfill my September prophecy that No. 1 hits would become their new normal. Lest anybody still question the group’s commercial potency after “Dynamite” has lodged itself in the top two spots on the Hot 100 for seven consecutive weeks, “Savage Love” should obliterate their doubts once and for all. BTS’s latest chart-topper is arguably even more significant than “Dynamite,” as it features them singing in their native Korean, whereas they performed “Dynamite” entirely in English. Moreover, it consummates the paradigmatic shift in the way BTS can impact a song’s Hot 100 potential.

For years, U.S. radio neglected to play BTS as their stateside profile continued to expand. Their collaborations with Western pop stars and producers helped them make inroads on radio and the Hot 100. Steve Aoki’s “Mic Drop” remix became their first Top 40 hit (No. 28) in 2017, and the Halsey-assisted “Boy with Luv” peaked at No. 8 last year, a career best at the time. Other high-charting Hot 100 singles such as “Idol” (No. 11) and “On” (No. 4) were also accompanied by remixes featuring Nicki Minaj and Sia, respectively. These collaborations gave BTS legitimacy in the eyes of programmers, critics and casual listeners who denied their global popularity and hitmaking potential.

BTS used to benefit from Western pop stars featuring on their songs. Now, the tables have turned, and a seven-piece Korean boy band is a kingmaker on the Hot 100.

For proof, look no further than the sales of “Savage Love.” The track sold 76,000 digital downloads this week, an 814% increase over last week, and vaulted to No. 2 on the Digital Song Sales chart behind the indomitable “Dynamite” (94,000). “Savage Love” has maintained a strong radio presence and landed at No. 5 on this week’s Radio Songs chart, largely thanks to the original version. But, according to Billboard, the bulk of this week’s sales came from the BTS remixes while streams were split evenly among the BTS and non-BTS versions. Billboard ultimately ruled that “its overall activity in that span favored the Jawsh 685/Derulo/BTS versions so BTS is now officially listed on the Hot 100 as a billed act on the song for the first time.” Incidentally, “Savage Love” also enjoyed the biggest jump to No. 1 on the Hot 100 (8-1) since the Weeknd’s “Heartless” surged 32-1 last December.

The reason for the “Savage Love” chart bump is simple, even if it continues to baffle skeptics: BTS fans support BTS’s music. Pop music is an inherently fickle industry, and precious few artists have enough name recognition and star power to rocket a song to No. 1 just by featuring on it. BTS—and, by extension, the passionate BTS ARMY—is the exception to the rule. When news of the “Savage Love” remix broke, fans mobilized to help BTS earn their second No. 1 hit in less than two months and occupy the top two slots on the Hot 100 simultaneously.

MORE FROM FORBESWith Their New No. 1 Hit ‘Dynamite,’ BTS Has Crossed The Final Frontier Of Pop SuperstardomBy Bryan Rolli

That’s not to say every song with a BTS feature will automatically go to No. 1; that’s an unrealistic and unhelpful expectation. What it does say, however, is that BTS has a Midas touch when it comes to minting new pop smashes. The success of “Savage Love” was a perfect storm of TikTok virality, a radio-friendly makeover from a tentpole pop star (Derulo), and a guest vocal by the biggest group in the world at its commercial apex. BTS is still riding high from the success of “Dynamite” as they gear up to release their new album, BE, next month; that they managed to dash off another No. 1 hit in the interim speaks to their nearly unparalleled stardom and ever-growing fanbase. Don’t be surprised if BTS now gets flooded with requests from other Western pop artists to show their songs some love—savage or otherwise.