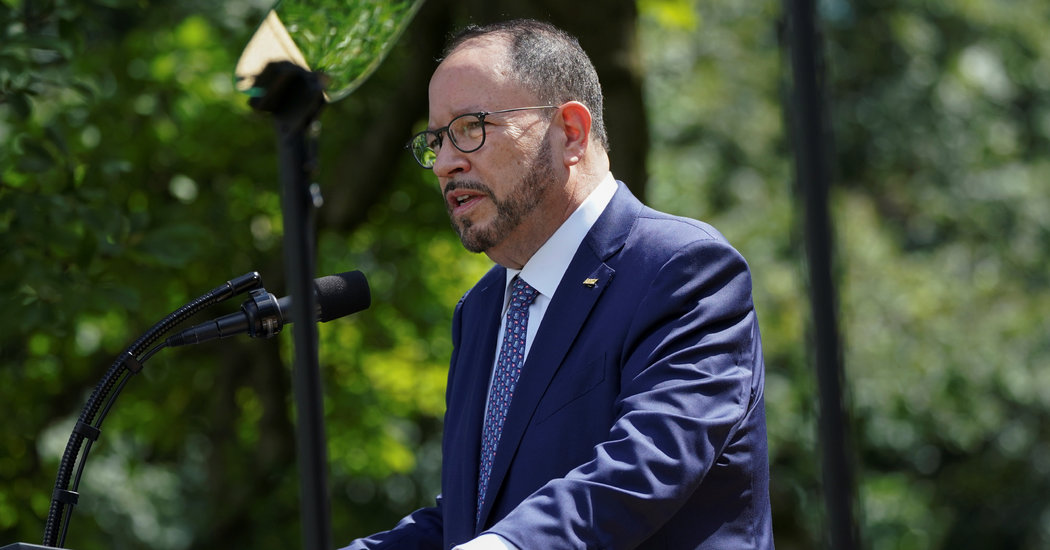 When Lina Baez-Rosario moved to the United States as a young girl, she missed her home in the Dominican Republic. Her parents made sure to cook with familiar flavors, to keep memories alive.

As an adult, the 42-year-old special education kindergarten teacher, who lives in the Inwood area of Manhattan, found those same tastes through the same Goya Foods products.

“Goya is the one product that I know that my family used, that my mom still uses,” Ms. Baez-Rosario said, “because it’s the one that resembles home to them.”

On Thursday, though, she decided she would not be buying Goya products again after the company’s president, Robert Unanue, praised President Trump during a visit to the White House.

Mr. Unanue compared the president to his grandfather, an immigrant from Spain who founded the food company in 1936. “We’re all truly blessed at the same time to have a leader like President Trump,” Mr. Unanue said.

After Mr. Unanue’s comments, consumers have been dumping out ingredients and calling for a boycott on social media with the hashtags #BoycottGoya, #GoyaFoods and #Goyaway. Prominent Latino politicians like Julián Castro, the former presidential candidate and secretary of housing and urban development, and Representative Alexandria Ocasio-Cortez weighed in as well.

“If we are the main source of income, if you are targeting us and you are marketing toward us, then your responsibility is to every Latino person, at least in the United States,” Ms. Baez-Rosario said.

In an era of activist shopping, when consumers are ever more vocal about tying their purchasing power to their politics, Mr. Unanue’s comments run the risk of alienating his company’s core market.

“There are people out there that say they support the immigrant community, but at the end, money is stronger,” said Gonzalo Guzmán, 38, the head chef and a partner at Nopalito, a Mexican restaurant in San Francisco. “At the end, it’s always that. It’s always money.”

A Goya representative did not reply to specific questions about the controversy. But in a news release, the company pointed out that it has donated 1 million cans of chickpeas and 1 million pounds of other products to food banks across the nation. “We are committed to our country and the need to give back because it is the right thing to do,” said Mr. Unanue in the release.

Goya is the largest Hispanic-owned food company in the United States, and millions of Latinos have grown up with Goya beans and spice blends, tasting their childhoods in the adobo and sazón.

But even so, the multibillion-dollar company, headquartered in New Jersey, can seem as corporate and faceless as any multinational food outfit.

“It’s really not a for-us by-us product,” said Yadira Garcia, 36, a founder and the executive chef of Happy Healthy Latina, which uses culturally relevant cooking and gardening to help underserved communities eat healthier. “It’s just marketed to us like it is.”

“You can’t just tell a part of our story and exalt a part of our story, and also profit off our pain and our joys, but not really truly be inclusive in our community,” Ms. Garcia continued, before criticizing the company’s leadership for a lack of diversity. “You can take our money, but we don’t have a seat at their table.”

Mr. Unanue visited the White House on Thursday to celebrate the president’s signing of an executive order intending to improve Hispanic Americans’ access to educational and economic opportunities. And on Friday, Mr. Unanue stood by his words during an appearance on the television program “Fox & Friends.”

“I’m not apologizing for saying — and especially when you’re called by the president of the United States — you’re going to say, ‘No, I’m sorry, I’m busy. No thank you’?” he said. “I didn’t say that to the Obamas, and I didn’t say that to President Trump.”

On Friday evening, President Trump tweeted his support of Goya, after a day of #BuyGoya tweets from his supporters fighting back against the boycott.

The prominent chef José Andrés said that Mr. Unanue could have met with the president and taken a more moderate tone, instead of sparking the all-out social media war that has raged since Thursday afternoon.

“You can go and say: ‘Thank you for supporting the Latino community,’” Mr. Andres said in an interview. “But then to go and say you are a great leader? A great leader for whom?”

Mr. Andrés said he respects the Unanue family, and has worked with them in Puerto Rico in the aftermath of Hurricane Maria, but called the praise of President Trump “over the top.”

“Really? Four months before elections? When he wants to send 1 million DACA children back to their countries?” said Mr. Andrés, referring to the Deferred Action for Childhood Arrivals program. “When he is caging children? When he is allowing militias to patrol the border?”

Latinos are projected to make up the largest nonwhite ethnic voting bloc in the 2020 election. In the 2018 midterm elections, Latinos voted Democratic by a more than two-to-one ratio, according to the Pew Research Center.

To Gustavo Arellano, the author of “Taco USA: How Mexican Food Conquered America” and a reporter for The Los Angeles Times, Mr. Unanue’s comments were consistent with those of a business owner looking for tax breaks, rather than a leader supporting his community.

“It’s a betrayal for these consumers,” he said. “They see Trump as the antithesis of Latinos, in fact, as the enemy.”

Mr. Unanue’s statement comes during the middle of a pandemic that has disproportionately affected Latino communities, while benefiting companies like Goya, whose pantry products, like canned beans, flew off grocery shelves.

For Mr. Arellano, 41, the fact that Goya is a food brand makes it even more painful for Latino cooks.

“To see something that represents nurture and community and family and most importantly the kitchen?” he said. “That’s where it’s a stab in the heart. Or the stomach.”

Adán Medrano, 71, is a chef and the author of “Don’t Count the Tortillas: The Art of Texas Mexican Cooking,” a cookbook about the Mexican food of Texas. He said Goya’s food donations are not enough.

“Goya has shown that by thinking and saying that Trump is a great man, it has become disconnected from the heartbeat of the Latinx community, and particularly with our food, which has been so important to our resistance,” he said.

In standardizing a product line, Goya has overlooked the nuances of different Hispanic cultures, said Eric Rivera, 38, the chef and owner of Addo in Seattle, a restaurant and food company that sells Latin American food and ingredients that it ships nationwide.

“What people do is put a blanket statement over what Latin American cooking is, and they call it Caribbean food and they expect it all to be the same,” said Mr. Rivera, who is of Puerto Rican descent. “My problem, always, with Goya was that they basically homogenized all the flavors.”

Mr. Rivera and other chefs have lines of spice blends, alternatives to the Goya brand. Ms. Garcia, of Happy Healthy Latina, is developing new products with Loisa, a New York-based Latin American food company in which she is a partner.

“They just colonized our culture to benefit themselves,” Mr. Rivera said, referencing the Unanue family heritage. “They literally just like, Christopher Columbus-ed us.”