For those who have it in their heads that only Democrats are talking tough to citizens about obeying social distancing orders and threatening fines and arrests amid the coronavirus pandemic, think again.

R. Rex Parris — the Republican mayor of Lancaster, which is about an hour north of Los Angeles — apparently has upped the ante.

What did he say?

Parris took to Facebook Wednesday and gave a literal life-and-death warning to folks who may be readying a protest in his city against the economic shutdown, similar to those that have taken place across the country: 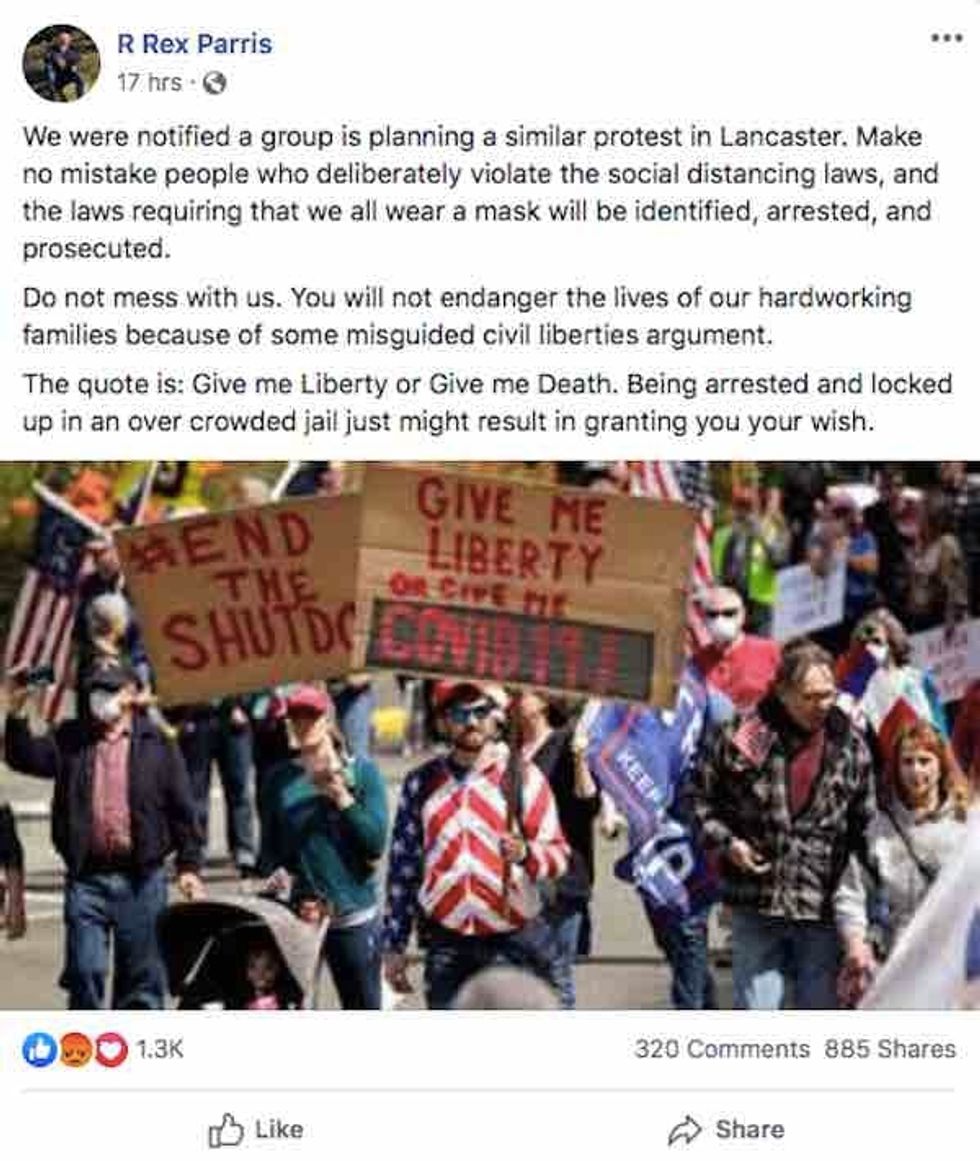 “We were notified a group is planning a similar protest in Lancaster,” Parris wrote. “Make no mistake people who deliberately violate the social distancing laws, and the laws requiring that we all wear a mask will be identified, arrested, and prosecuted.”

His words got tougher: “Do not mess with us. You will not endanger the lives of our hardworking families because of some misguided civil liberties argument.”

Then his coup de grace: “The quote is: Give me Liberty or Give me Death. Being arrested and locked up in an overcrowded jail just might result in granting you your wish.”

How are folks reacting to the mayor’s warning?

Although a number of commenters stood by Parris’ post, others did not enjoy his stern warning — but Parris shot right back at a few of them:

“Hitler establishes that it is not our right to peacefully assemble if we disagree with government,” one commenter wrote. “But it’s OK for us to line up in masses at Walmart; your reasoning for punishment of innocent civilians is definitely unconstitutional.”

To which Parris replied, “Protest if it makes you feel better. Just keep six feet apart and keep your mask on.”

Another commenter said, “The people would rather die in your jails than put up with a petty tyrant spouting it is good for the people. The same mantra of every single dictator of every country that lost millions of lives for the good of the people. [You’re] not god or even a crappy congressman — just a tin pot mayor playing at god.”

Parris quipped, “I don’t think you have ever been to jail.”

Yet another commenter asked, “Will we be put in cells formerly used by … dangerous criminals who were released into society because of fear they would contract and spread the virus to other criminals in the jail?”

Parris replied, “Do you really want to find out?”

But here’s one comment he didn’t respond to: “Are you kidding me? … misguided civil liberties??? There are people in a panic!!! Many are NOT receiving a pay check. They are facing the loss of their businesses. They can’t pay their bills and may soon not be able to feed their families. The only recourse they have is to stand up for their … civil liberties!!!!”

Parris, 68, also had tough words for those who don’t abide by city’s requirement instituted in early April that face coverings are worn in public.

“I’m hoping that I don’t have to put a consequence on this ordinance,” Parris said at a council meeting when asked about consequences for not following the rule, the Antelope Valley Press reported. “Make no mistake, that’s exactly what we will do. And we will start issuing tickets for misdemeanors if it comes down to that. We are not going to allow anyone in our city to endanger the lives of our hardworking families. And anyone who is not wearing a mask, that is precisely what you’re doing.”

He added, “We’re not doing this because we want to or because we enjoy doing it. We’re doing it because people’s lives are in danger.”

Parris won his fifth term as mayor last week in a landslide, defeating four challengers and receiving nearly 70% of the vote.