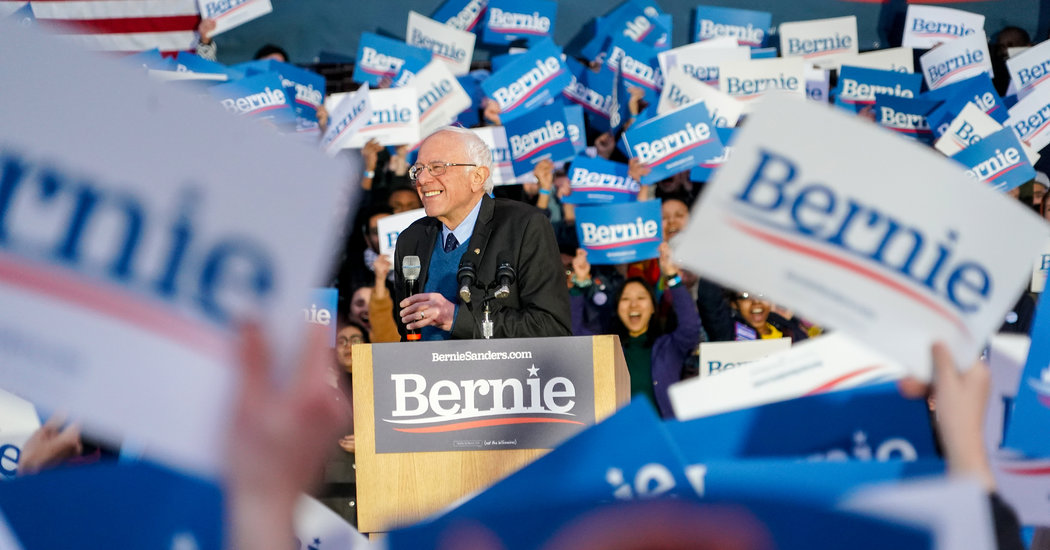 ANN ARBOR, Mich. — In what now feels like a faded postcard from an antiquated universe, Senator Bernie Sanders was wrapping up one of his last, elbow-flailing rallies in front of a few thousand supporters at the University of Michigan. It was late on a Sunday afternoon in early March, a few days before the coronavirus would effectively shelter the 2020 presidential campaign in place, with Mr. Sanders stuck in the runner-up position.

As it turned out, this would be among the last non-virtual campaign rallies of the 2020 primary season. Nearing the end of his speech, Mr. Sanders had to that point not once mentioned the name Joe Biden, a departure from his previous rallies in which he had drawn increasingly hard contrasts between himself and Mr. Biden, the former vice president and Democratic front-runner.

To some, this shift could be taken as a signal that Mr. Sanders of Vermont was entering a less confrontational phase of his campaign. But that notion died abruptly.

“We’re taking on many people in this campaign, not just Joe Biden,” Mr. Sanders thundered.

“Booooo,” came the immediate response from the crowd.

All of which, Mr. Sanders seemed to suggest, were synonymous with Mr. Biden. He vowed that his grass-roots support would be enough to overcome the former vice president’s built-in establishment advantages. He waved his fists as he walked offstage to the Doobie Brothers’ “Takin’ It to the Streets.”

The coronavirus has since forced the presidential campaign into a great uncharted indoors and become perhaps the paramount issue of the 2020 election.

But a decisive question remains unchanged and unresolved today, just as it did before the race was settled and the world stopped: Would the hesitation, or worse, of Mr. Sanders’s voters to embrace Mr. Biden be enough to keep them from turning out for him in the fall?

The gravity of this question was apparent Wednesday in Mr. Sanders’s announcement that he would be suspending his campaign. “As I see a crisis gripping the nation, exacerbated by a president unwilling or unable to provide any credible leadership and the work that needs to be done to protect others, I cannot in good conscience continue a campaign that I cannot win,” Mr. Sanders said during a Wednesday morning conference call with his staff.

Embedded in the statement was an acknowledgment that the events of recent weeks had turned the 2020 primary race into less of an ideological contest. The “movement” that Mr. Sanders would frequently liken his campaign to had been rejected by Democratic voters and, then, usurped by events.

In early March, after Covid-19 had grounded him back in Vermont, Mr. Sanders would become less direct in his critique of Mr. Biden and more so of Mr. Trump. He adopted an increasingly disdainful tone against the president. “The first thing we have to do, whether or not I’m president, is to shut this president up right now,” Mr. Sanders said last month in what would be the final Democratic debate of the 2020 primary race. “It is unacceptable for him to be blabbering with un-factual information that is confusing to the general public.”

In a sense, the clear and present threat of the coronavirus softened the debate that had raged for much of 2019 and early 2020. “This virus thing makes it very hard to be political,” said Harry Reid, the former Democratic Senate majority leader. It has focused attention on Mr. Trump in a way that highlights the president’s shortcomings, Mr. Reid added. It also served to minimize the policy differences that were apparent during the Democratic primary race.

“That divide is literally now a matter of life and death,” said Representative Ro Khanna, Democrat of California and a national co-chairman of the Sanders campaign. Mr. Khanna said he believed progressives would eventually win the day, and would become the dominant force inside the Democratic Party. Not yet, though.

For much of the primary race, the challenge of Democratic unity had been treated as something that could be put off; or at the very least, as a nuisance that would resolve itself through shared aversion to Mr. Trump. But there had also been signs that the split between rank-and-file supporters of Mr. Sanders’s and any eventual nominee not named “Bernie” might be too wide to fully reconcile.

The challenge resonated in part because of how decisive this split proved four years ago. Exit polls from the 2016 presidential race revealed that about 8 percent of former Sanders supporters said they had voted for Mr. Trump — a small but significant number given that Mr. Sanders received nearly 40 percent of the Democratic primary vote; countless other Sanders supporters had either wound up supporting a third-party candidate in November of that year or had not voted at all.

By most indications, it would be a bigger challenge to motivate Mr. Sanders’s supporters to join Mr. Biden than if Mr. Sanders had prevailed, and he were attempting to win over Mr. Biden’s voters. Sixty percent of Sanders voters said they had serious misgivings about Mr. Biden, according to combined data from NBC/Wall Street Journal polls in January and February. Only 7 percent said they would be “enthusiastic” about supporting Mr. Biden; 31 percent would be “comfortable” with him. In contrast, 55 percent of Biden voters said they would be “enthusiastic” or “comfortable” supporting Mr. Sanders.

“I think it’s going to be a real, real problem,” said Adam Jentleson, a progressive media strategist and former top aide to Mr. Reid. “Everything we do moving forward should be done with the full awareness that bringing Bernie’s people on board is the most important thing we have to do in the next few months.”

Mr. Jentleson, who backed Senator Elizabeth Warren of Massachusetts, said he was encouraged by how strong the turnout numbers were in the primary elections among more moderate Democratic voters who supported Mr. Biden. “It does seem to validate the school of thought where if you give people a vessel to place their Trump hatred into, they will turn out in record numbers,” Mr. Jentleson said.

For his part, Mr. Sanders has said — repeatedly — that he will support the eventual nominee against Mr. Trump, a promise he reiterated on Wednesday. “Today I congratulate Joe Biden, a very decent man, who I will work with to move our progressive ideas forward,” Mr. Sanders said.

While not quite a full-throated tribute, perhaps the most significant aspect of it was that it occurred in April, as opposed to July, which was when Mr. Sanders finally came around to endorsing Hillary Clinton in 2016.

The news media tends to focus on the Bernie or Bust types, supporters of Mr. Sanders who have vowed not to vote for any other Democrat in November; last weekend, the well-known comedian and podcast host Joe Rogan, who had endorsed Mr. Sanders in January, said that he would probably support Mr. Trump over Mr. Biden. “I can’t vote for that guy,” Mr. Rogan said of Mr. Biden on his podcast.

Not surprisingly, backers of Mr. Biden’s tend to espouse a more hopeful — or wishful — view that 2020 will be different. There are, in fact, many fewer Bernie-to-Trump voters than it may seem. “He’s got some loud ones, there’s no question,” Mr. Reid said of Sanders supporters. “But that’s a small group of people.”

Mr. Biden brings more good will to a potential partnership with Mr. Sanders than Mrs. Clinton ever did, Mr. Reid said. There also appears to be far less personal animosity between Mr. Sanders and Mr. Biden than between he and Mrs. Clinton.

“There is a completely different dynamic now than in 2016,” said Terry McAuliffe, the former governor of Virginia and onetime Democratic National Committee chairman who has endorsed Mr. Biden. Four years ago, Mr. McAuliffe said, he believed that Mr. Sanders knew he would run again if he did not get the nomination, so it was in his interest to keep his supporters engaged and aligned with him. “This time, running again is not in play for either Bernie or Biden, so everyone has incentive to work together,” he said.

The single biggest difference between 2016 and 2020 is that the prospect of Mr. Trump is no longer hypothetical, Mr. McAuliffe said.

“I think there were a lot of folks who didn’t want to vote for Hillary, or who thought that Trump was a business guy, let’s give it a try,” Mr. McAuliffe said.

“Now he has this horrible record to stand on,” he continued. “There’s nothing more unifying for Democrats than that alone.”