ATLANTA — Five states hold primary elections on Tuesday, and the biggest race is in Georgia, kicking off what could be an important political year in the state. Georgia Democrats, whose hopes have often been dashed in recent years, think they have a chance to turn the state blue in presidential and Senate races for the first time in at least two decades.

Both of the state’s Senate seats are up for election this year, and on Tuesday, Democrats will select a candidate to oppose an incumbent Republican, David Perdue, in the fall. (The winner of the other seat will be chosen in a special election in November with no primary.)

On Tuesday morning, Mayor Keisha Lance Bottoms of Atlanta said on Twitter that voting machines were not working in many parts of the city.

Georgia polls close at 7 p.m. Eastern time, but more than one million voters have already cast ballots, most of them by mail, after Secretary of State Brad Raffensperger sent absentee ballot applications to all active voters. Georgia is also holding its presidential primaries, which were postponed from March because of the coronavirus pandemic.

The leading contender in the Democratic Senate primary is Jon Ossoff, 33, who became something of a wunderkind candidate when he came close to flipping a House seat in a 2017 special election. He has tried to position himself as a center-left consensus builder with a particular focus on civil rights.

Mr. Ossoff has received endorsements from two of Georgia’s most prominent Democratic congressmen, John Lewis and Hank Johnson, but he could face a runoff election if he fails to clear 50 percent in the crowded field of seven candidates. If he is to face a runoff, it will most likely be against either Sarah Riggs Amico, a former candidate for lieutenant governor, or former Mayor Teresa Tomlinson of Columbus, Ga.

Mr. Ossoff, helped by national name recognition and a fund-raising effort still in place from his 2017 run, injected a last minute jolt of cash into the race, seeking to clear the 50 percent threshold on the first swing. If he does, he’ll become the centerpiece of a statewide strategy for Georgia Democrats, who are aiming to not only flip the state in the Electoral College but also change the balance of power on Capitol Hill. 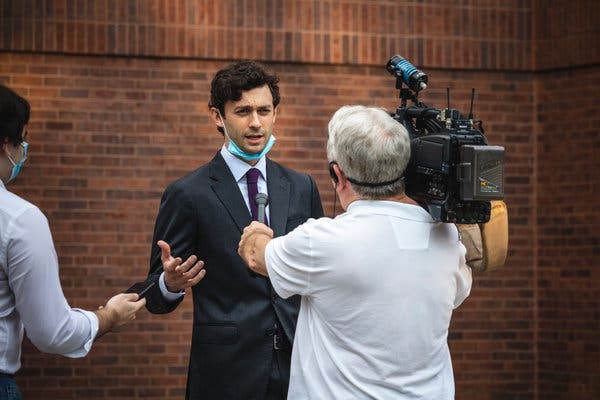 Jon Ossoff lost a race for a House seat in Georgia in 2017. Now, he’s running in the Democratic primary to challenge Senator David Purdue, a Republican.Credit…Audra Melton for The New York Times

Other races to watch on Tuesday