As nationwide protests following the death of George Floyd have thrown issues of economic inequality (which were already exasperated by the coronavirus crisis) into sharp relief emergency federal aid under the CARES Act is running out and lawmakers haven’t agreed on how to extend it, or whether to extend it at all. 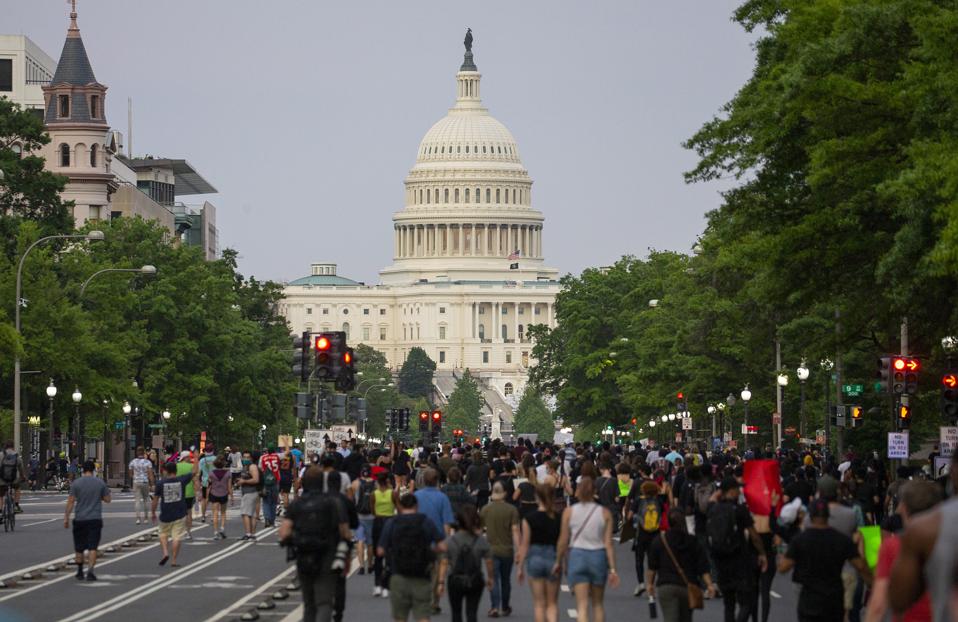 Demonstrators hold a protest in response to the police killing of George Floyd near the U.S. Capitol … [+] on May 29, 2020 in Washington, DC.

The extended unemployment benefits established by the CARES Act—an extra $600 per week funded by the federal government on top of state benefits—will run out on July 31; they’ve been a lifeline for the more than 40 million people who have applied for temporary benefits since the crisis began.

If those benefits run out before Congress and can extend them, former Obama administration economist Ernie Tedeschi told the Washington Post that the effect would be akin to delivering a “50 to 75 percent pay cut overnight to a huge chunk of the American population.”

The most widely discussed aspect of the CARES Act—those $1,200 stimulus checks—has come and gone; House Democrats included a provision for another round of checks in the Heroes Act, but Republicans have been opposed to the idea.

The CARES Act also places a moratorium on certain evictions but they are set to expire on July 25 (after which renters would get 30 days notice of any eviction proceedings); many states also enacted evictions bans, but nearly half of those have already expired.

There’s also the matter of more aid to state and local governments—a key provision of the Heroes Act put forth by the House last month—as governors clash with President Trump over how to respond to a public health crisis, and now a civil rights crisis.

If lawmakers don’t come to an agreement to shore up benefits before they expire, the Post is projecting that $1 trillion in emergency aid will be lost.

“The CARES Act was massive, but it was a very short-term offset to what is likely to be a long-term problem,” Aneta Markowska, chief financial economist at Jefferies, told the New York Times. “This economy is clearly going to need more support.”

Less than half of black adults currently have a job. The sobering statistic is just one example of how black communities have disproportionately borne the brunt of the economic damage caused by coronavirus, and it comes after unemployment rates for black workers reached a record low in the months before the pandemic.

Renters across the country are likely to be hit hard if CARES benefits are allowed to expire. “They’re lower income, have less savings and assets to draw on, and they’re more likely to be working in the industries that were affected by the shelter in place orders,” says Mary Cunningham, a fellow at the Urban Institute. “Black and brown people disproportionately face those housing challenges.” Cunningham says the issue is urgent: “there are going to be dire consequences if Congress doesn’t act.”

After the passage of the Heroes Act by the House last month, Republicans indicated that they wouldn’t vote on a new stimulus package until June. Yesterday, however, GOP leader Senator Roy Blunt indicated that the Senate will now likely wait until July to consider additional relief. “My personal belief is we will do something before the August break — that’s about the right timing,” he told CNN.

Since the crisis began, lawmakers have passed four pieces of rescue legislation. The first two bills—which shored up funding for testing and small business loans, established tax credits for paid sick leave, and expanded unemployment benefits—were followed by the historic $2.2 trillion CARES Act. That’s the bill that created the Paycheck Protection Program and authorized the IRS to send out the first round of stimulus checks. The CARES Act was succeeded by another $484 billion package that replenished funding for emergency assistance for small businesses after the PPP exhausted its initial $350 billion in funding after less than two weeks. The Heroes Act — a $3 trillion relief package designed by House Democrats led by Speaker Nancy Pelosi (D-Calif.)—passed the House last month but was widely criticized by Republicans, who said it was an unrealistic, partisan offering that was drafted without any Republican input and that it will be “DOA” in the Senate. Senate Majority Leader Mitch McConnell (R-Ky.) said last week that the next round of stimulus legislation will be the “final” bill Congress passes.

With Another $3 Trillion Stimulus Package On The Line, Here’s Everything The Government Has Done To Rescue The Economy So Far (Forbes)

Pelosi Attacks McConnell For Stimulus Bill Delay: ‘You Want A Pause? Tell That To The Virus’ (Forbes)