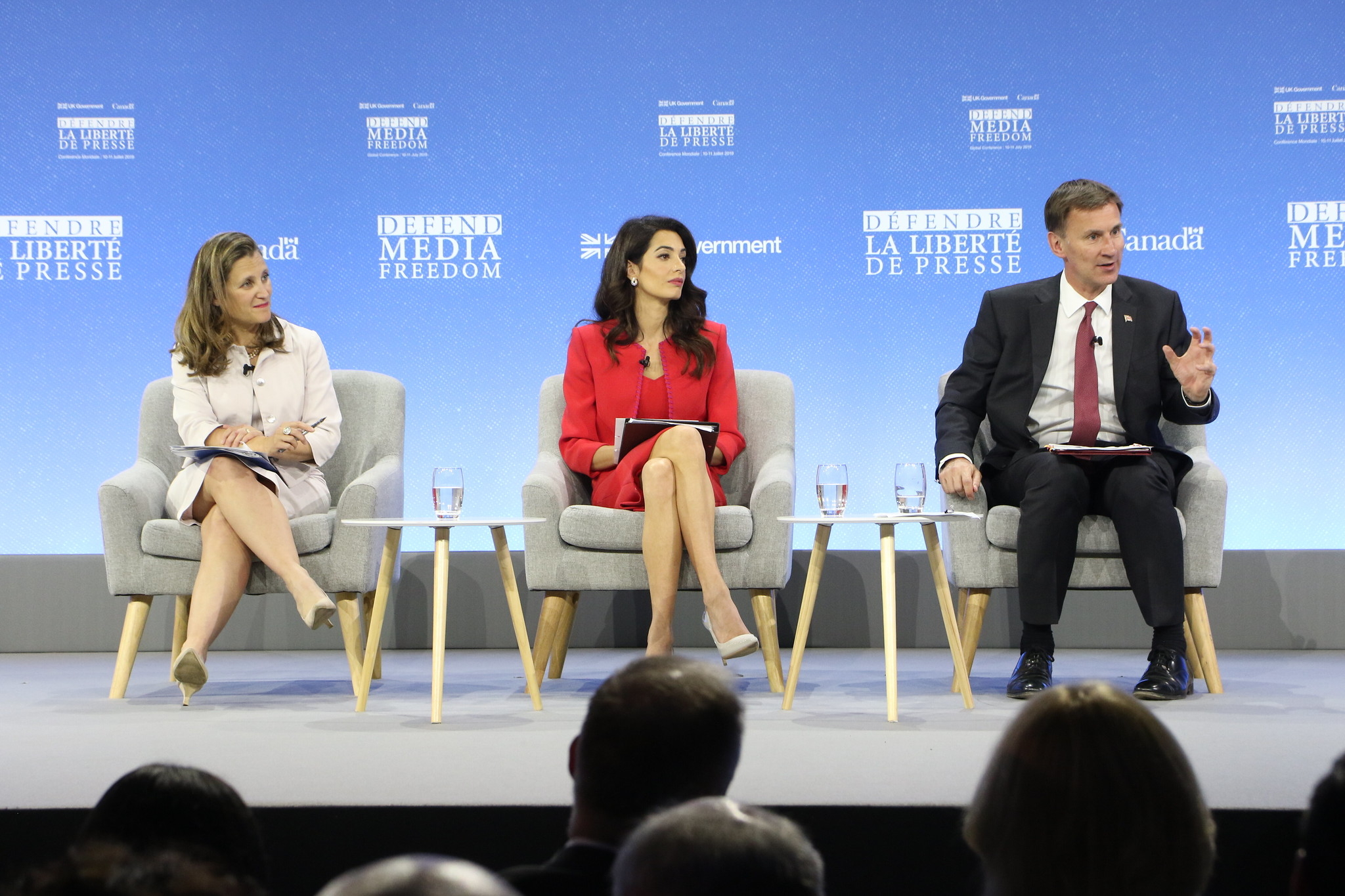 The British government has imposed a nine-month jail sentence on Tommy Robinson. Egregious as that is, it’s made all the more so by the fact that just a few miles away from his sentencing, the very same government was co-hosting a global summit on journalistic freedom.

I had no idea the British delegation’s leader, foreign secretary Jeremy Hunt, had also added Minister of Irony to his list of titles (which I hope will not include “prime minister” any time soon, but that’s for another column.)

As I wrote a couple of weeks back, Robinson has been in the crosshairs of the state for reasons that have nothing to do any real crimes, but rather for how his coverage of Muslim grooming gangs exposed the establishment’s silence.

This political class was also conspicuously silent about Robinson’s ordeal during the two-day Global Conference for Media Freedom, which featured much vaunting of western governments’ supposed commitment to free speech without any demonstration of it. Though that may have been by design. It’s much more enjoyable to sip cocktails and hang out at a ritzy London summit than to actually do anything.

The conference was co-hosted by the UK and my own country, Canada. Furthering the affair’s devotion to ironic hypocrisy, I was at one point barred from attending a press conference by Canada’s foreign minister, Chrystia Freeland, because the room selected at the 16-acre facility was “too small” (though it had room for a three-person Al Jazeera crew and nearly a dozen others from mainstream Canadian media outlets.)

To my surprise and pleasure, the mainstream media journalists unanimously threatened to walk out of the event if Freeland’s press flak didn’t let everyone in. It was only I and another conservative journalist, Sheila Gunn Reid of Canada’s Rebel, who were apparently going to be the wafer thin mints of the press conference, though in the end we were both allowed in after the protest forced the conjuring of a larger space.

Had this happened at any other conference, I doubt the government would have caved. They may be censors, but they’re shrewd enough to want to avoid the “journalists banned from covering press freedom summit” headlines. But the whole thing was a farcical charade, paying only lip service to free speech.

Hunt gave a glowing introduction to Malaysian communications minister Gobind Singh Deo, calling him a press freedom trailblazer despite his push for the Malaysian government to censor the internet and maintain “extra-territorial” prosecution powers for online hate speech. The trigger for this call was a British blogger making a turban joke.

Singh Deo was in good company though as Pakistan’s foreign minister also had a speaking slot, during which no one brought up the myriad Pakistani journalists who’ve wound up behind bars (or worse) for the crime of journalism running afoul of the state or Qur’an.

The most consequential of the sessions were closed to the press and public, as I learned when I was ejected from one of them after naively assuming I could cover it. On the agenda was a multilateral meeting of the government representatives present to discuss how they intend to implement the matters raised at the conference. Closed-door democracy, basically.

It’s tough to be amused by western governments’ collective channeling of Monty Python when these are the people who can legislate away free speech with the strokes of their pens, and don’t hesitate to do exactly that.

Instead, Britain and Canada wished only to point fingers at the most extreme examples of journalists facing persecution to distract from their own abysmal records on free speech domestically. Such as Canada’s desire to revive section 13 of the Canadian Human Rights Act, or the United Kingdom’s “online harms” white paper calling for regulation of social media companies who allow users to post “harmful” material on the internet.

Robinson’s sentencing literally commenced during a panel by Hunt and Freeland entitled “What is media freedom: why is it important?” Yet his case – the kind the politicians and NGO representatives at this summit would be decrying had it happened in any other country ­– elicited only awkward stammering whenever I asked about it.

Robinson wore a “convicted of journalism” t-shirt to his sentencing hearing, after which he was ushered out the back door of the Old Bailey to be taken to jail. Whatever one might think of him, there’s no denying he’s remained steadfast through not only the death threats and physical assaults sustained because of his coverage, but even staring at a nine-month sentence that will keep him locked up during his three kids’ summer break from school.

You’d be hard-pressed to find a western journalist who’s staked as much as Robinson, though his government prosecuted him. May it be a cautionary tale: the values and freedoms governments loudly proclaim are always conditional.

When I asked Freeland how she justified standing beside a Malaysian state censor at a press freedom conference, her answer was that it “is not meant to be a gathering of angels.”

Mission accomplished, in that case.

Mark Steyn Cruise alumni may remember Andrew Lawton as the master of ceremonies on our inaugural voyage through New England last year. He’ll be back for next year’s Mediterranean cruise, which is quickly booking up. If you’d like to sail with Mark, Douglas Murray, Conrad Black and others to be announced, you can sign up here. Though the fun is year-round when you’re a member of the Mark Steyn Club. From transcripts of Mark’s content to commenting privileges to special discounts of Steyn events, you’ll find lots of perks come along with a membership.