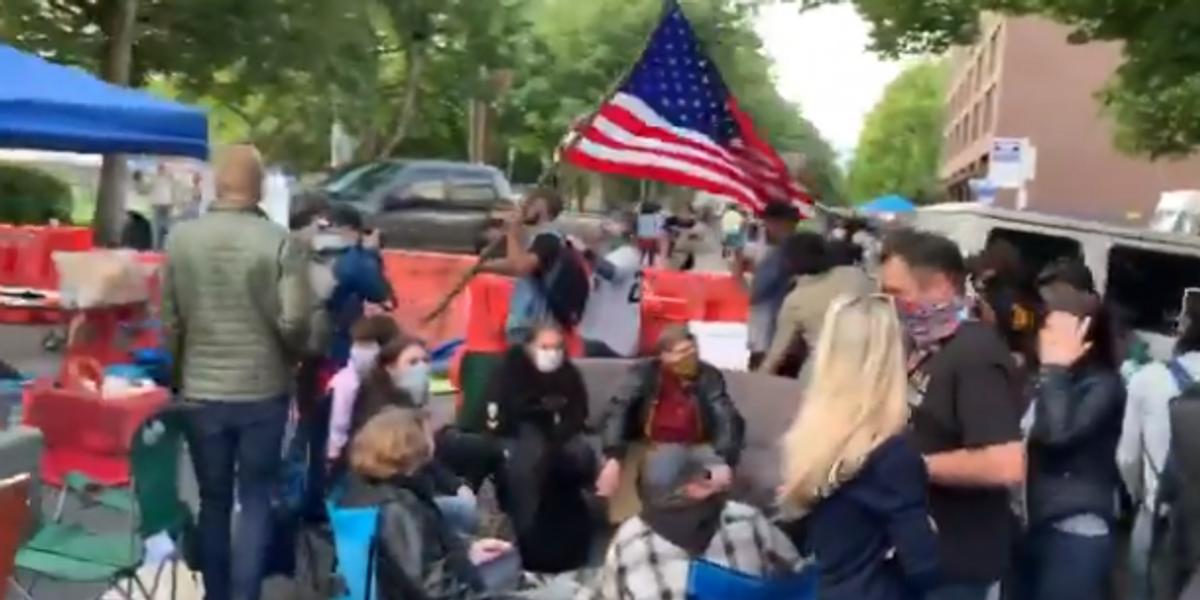 The Capitol Hill Autonomous Zone in Seattle hasn’t been the welcoming euphoria that many promised when it was established. A street preacher was physically assaulted, and a protest leader demanded white people in the CHAZ give money to black people or face retribution. On Saturday, a black man holding an American flag was berated by CHAZ citizens.

Video taken by Elijah Schaffer of BlazeTV, host of the “Slightly Offens*ve” podcast, shows a black man being tormented by a mob in the autonomous zone. The crowd of mostly white people in the CHAZ hurl insults at the black man with the flag, who is not engaging the protesters.

“Keep on walking you race traitor a** b*tch,” one person screamed on a megaphone. “Is that your boyfriend, race traitor?”

“When you fly that flag it’s offensive,” a man wearing a Soviet Union-era ushanka hat told a woman holding an American flag as “Can You Feel the Love Tonight” from the “Lion King” soundtrack blared in the background.

A masked man dressed in all black stole an American flag from a young woman walking with the black man. The group with the American flags told the crowd that they have peacefully come to the autonomous zone. “We’re not here looking for a fight,” the woman said.

Someone in the crowd called the group carrying the American flags “white supremacists.”

“If they’re going to come in here with the flag being disrespectful, they can get the f*** out,” a woman in the crowd told a man, who appeared to have some authority in keeping things somewhat secure in the CHAZ.

Some residents of the CHAZ attempted to forcefully take the black man’s American flag. A man screamed, “Bring it down!”

There is a movement from some in the autonomous zone to change the name from “CHAZ” to “CHOP,” which stands for “Capitol Hill Occupy Protest” or “Capitol Hill Organized Protest.” The people of independent area of Seattle may be compelled to drop the “autonomous” part of their domain since they had to call the city’s fire department to put out a literal dumpster fire.