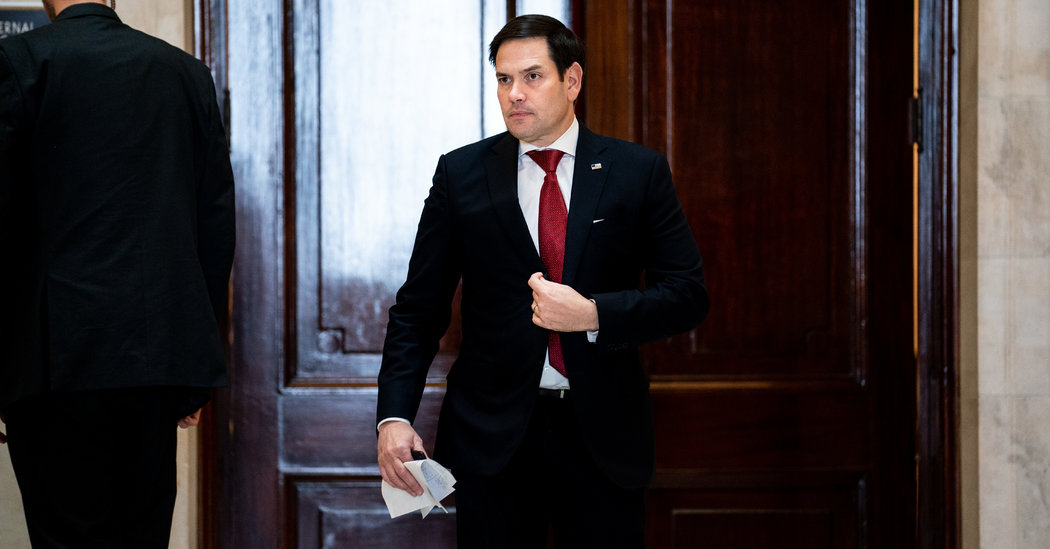 WASHINGTON — When Senator Marco Rubio released a report last February warning that the United States risked losing important components of its medical supply chain to China, it barely registered with most Americans.

A little over a year later, as the coronavirus rips across the globe, the abstract threat has become a glaring reality with life-threatening consequences as American officials and consumers haggle with Chinese companies for lifesaving supplies like masks and tests. And Mr. Rubio, a conservative Florida Republican who has introduced a bill that aims to cut off China’s chokehold on the global pharmaceutical supply chain, now has bipartisan support for his effort, including from progressives like Senator Elizabeth Warren, Democrat of Massachusetts.

China hawks in Congress like Mr. Rubio, who have long pressed for a more confrontational approach to Beijing, are intensifying their efforts to enact tougher policies targeting the country. They see the coronavirus crisis as a critical opportunity to draw broader support for their push to punish and challenge China with new sanctions, mandates for domestic manufacturing and controls on American exports.

“There comes a point where, as a nation, we have to ask ourselves what are the critical goods that you must retain the ability to make even if it’s not the most efficient outcome,” Mr. Rubio said. “I think that’s now right before us.”

It is not clear whether any of the hard-line measures can quickly pass Congress, where lawmakers have focused most of their time so far to cobbling together government relief packages to help families and businesses weather the pandemic and its devastating economic impact. Broader attempts to reset the United States’ relationship with China will probably have to wait until the crisis abates.

But those who have long railed against China’s human rights abuses and warned of its dominance over the global supply chain are taking advantage of anger about the Chinese government’s handling of the virus to make the case that it is time to take stronger action.

“What the virus has done,” Mr. Rubio said, “is it has exposed longtime trends in a crisis situation.”

In the weeks since the pandemic took hold in the United States, several lawmakers have unveiled legislation that would aim to unwind the two nations’ economies and blame Beijing for the spread of the virus.

Even before the coronavirus pandemic emerged, Washington had made a series of aggressive moves in its competition with Beijing. But the severity of the virus has in recent weeks forced government officials worldwide to grapple with their approach to China across many fronts.

Like lawmakers, some Trump administration officials have used the crisis to fuel their push to encourage American manufacturing of pharmaceuticals and reduce dependence on China for the drugs and medical products that fuel the domestic health care system. The White House trade adviser Peter Navarro, a longtime China hawk, has pressed to tighten “Buy American” laws and end exceptions allowing the government to purchase medical products from other countries.

United States military officials last week called on Congress to authorize additional funding to bolster deterrence against China, a sign that many in the military expected tensions between the two nations to grow. In Japan, officials have earmarked money to help its manufacturers move production out of China in an effort to offset the disruption caused by the virus and curtail their reliance on the nation.

“We would really be missing an opportunity — and frankly it would simply be a failure of leadership — if we did not take this present crisis and say, ‘Now it’s time to do something about this,’” Senator Josh Hawley, Republican of Missouri, said in an interview.

Mr. Hawley last week released a three-page memo outlining policies he said should be included in the next economic stimulus package to loosen China’s hold on the global supply chain. His proposal would require that manufacturers begin to use more materials from domestic suppliers, impose crisis export controls on critical American-made equipment like ventilators, and provide investment subsidies to manufacturers to encourage them to bring their production back to the United States.

“We need to put American workers in position to surge out of this,” he said.

Senator Tom Cotton, Republican of Arkansas, who said the Chinese government must be held accountable for its role in the spread of the virus, has unveiled legislation that would allow Congress to impose sanctions on government officials who perform “acts intended to deliberately conceal or distort information about a public health emergency of international concern” such as the virus. It is modeled after the Global Magnitsky Act, a law designed to punish individuals around the world who are accused of human rights violations or corruption.

Mr. Cotton, a hawk and one of the first lawmakers to warn of the dire effect the virus could have on the United States, is among the most vocal proponents of adopting a more adversarial relationship with China. He has also called for Congress to withhold funding from the World Health Organization, which has come under fire for what critics call its repeated deference to Beijing.

“The World Health Organization is in the pocket of China,” he said on Thursday. “We’re going to have to establish our own organization and invite members of the civilized world to join us.”

President Trump has expressed similar views, threatening this week to cut off funding for the W.H.O. and calling it “very China-centric.”

It is not clear whether Democrats will agree with the China hawks — mostly conservative Republicans — to adopt a more aggressive stance toward Beijing. While Republican lawmakers in both the Senate and House have expressed anger at China, Democrats have been far more circumspect.

Many of the most vocal lawmakers are rising stars within the Republican Party who see China as the central foreign policy focus that will shape their time in politics. That has set off fierce jockeying behind the scenes for the role of the party’s thought leader on China. Mr. Hawley, Mr. Cotton and Mr. Rubio, for example, each introduced their own versions of legislation to limit Chinese active pharmaceutical ingredients in the United States’ drug supply.

Bipartisan agreement has emerged in recent weeks around the urgency of that issue. The bill led by Mr. Rubio would give the Food and Drug Administration a clearer picture of how reliant drugmakers are on Chinese products. Ms. Warren, the liberal Democrat, has called it a “common sense solution.”