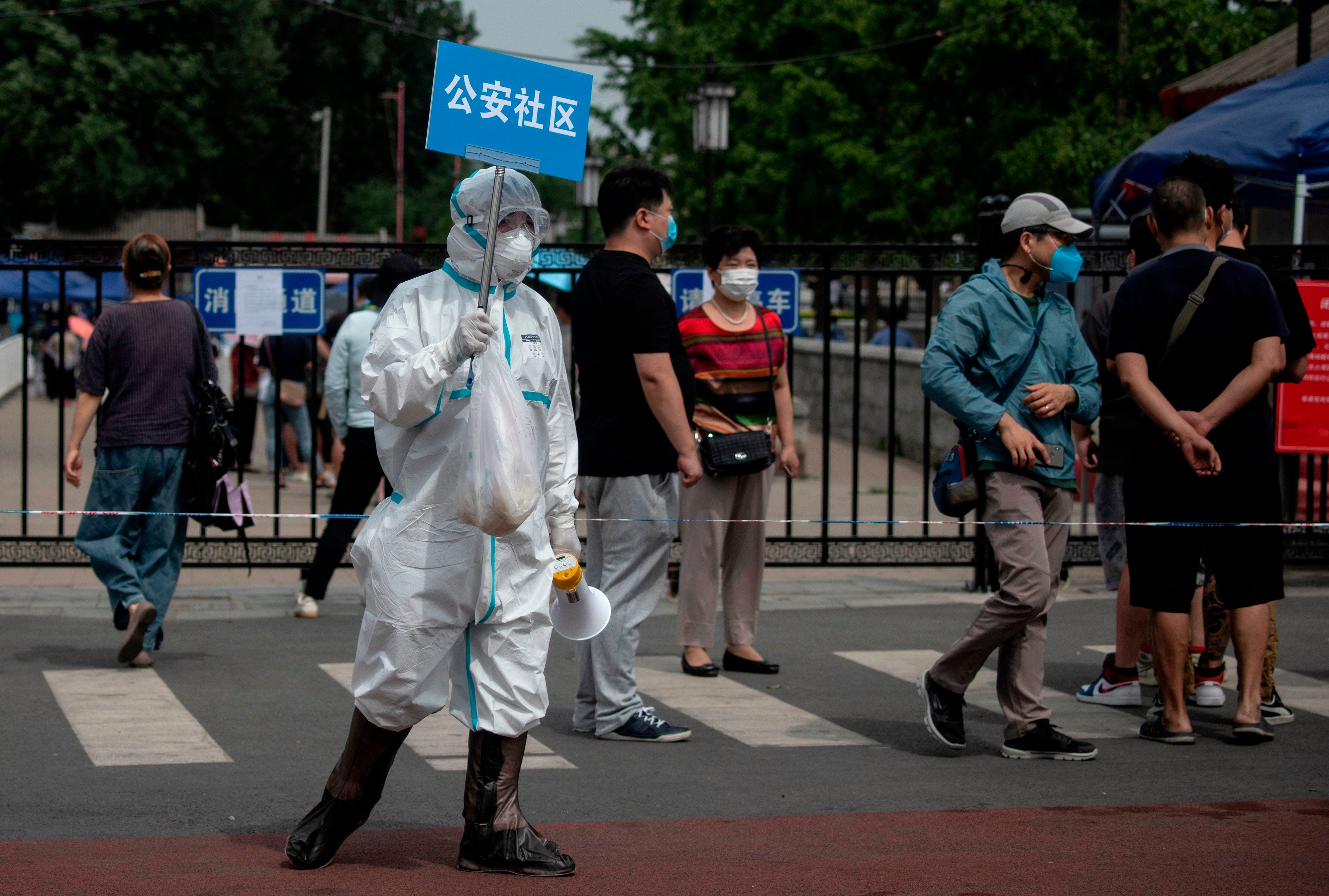 BEIJING – Chinese authorities intensified efforts to stem a resurgence of coronavirus cases in Beijing after the capital reported several dozen new instances of the disease this week after a period of almost two months without a single new infection.

Beijing has recorded more than 130 coronavirus infections, but no deaths, since Saturday. Most are linked to a wholesale food market where a new COVID-19 coronavirus cluster emerged. Officials on Wednesday locked down some residential compounds and closed schools. Beijing’s airports cancelled two-thirds of all flights.

The city raised its coronavirus emergency threat level from Level 3 to Level 2 – Level 1 is the highest alert level – and hardened social distancing requirements for its 22 million inhabitants. Thousands of people have been ordered to take tests and anyone who visited Xinfadi Market has been ordered to self-isolate for 14 days.

Liu Lun, 32, who works for a Beijing construction company, said every employee in his firm has been tested for COVID-19, the disease caused by the new coronavirus. “With the help of big data we can defeat the virus again,” he said, adding that he admired all the doctors and nurses who are once again getting busy “to overcome the difficulties.”

This is what China did to beat COVID-19:Experts say America couldn’t handle it

Xinfadi is the largest wholesale food market in China – equivalent to 250 football fields – and supplies about 80% of Beijing’s daily meat and farm produce. Officials have yet to pinpoint the precise source of the new outbreak, according to Zeng Guang, a member of the National Health Commission, which formulates China’s health policies.

He said in a new conference on Sunday that “Beijing will not turn into a second Wuhan, spreading the virus to many cities all across the country and even needing a (full) lockdown.” But Xu Hejian, a spokesman for the Beijing government, warned Wednesday that the situation was “extremely severe,” and that people “must fully grasp that epidemic containment in the capital is long-term, complex and arduous.”

In March, China’s ruling Communist Party declared victory over the virus. The country has added about 4,400 coronavirus cases to its total since hitting 80,000 infections that month, according to John Hopkins University’s coronavirus tracker.

In Wuhan, the Chinese city where coronavirus cases were first reported late last year, there have been isolated mini-outbreaks after it emerged from an 80-day lockdown.

But residents say life has managed to return to something that resembles “normal.” The traffic jams are back and there’s lively crowds on the streets. “Wuhan seems to be again a city showing her vitality,” said Chu Tian, 31, a video journalist, in a phone interview.

However, he said that there remain a lot of “for sale” and “for rent” signs on buildings and he estimated that fewer than half of businesses have returned to their pre-lockdown selves. “For ordinary people in Wuhan making a good living is still difficult, especially for small business owners and vendors who sell things on the street,” he said.

Elsewhere around the world, months into Iran’s battle against coronavirus the Middle East’s first and biggest outbreak saw its daily death toll break the 100 mark for the first time since mid-April. In New Zealand, after 24 days with no new cases, the country has two – brought to the nation by a family who traveled there from the United Kingdom.

In Sweden, lawmakers held a 15-minute remembrance for the victims of the pandemic that has killed nearly 5,000 people in the Scandinavian country. Sweden, an outlier in the way it is handling the outbreak – it has not imposed any formal lockdown, most stores have stayed open – has one of the world’s highest death rates per capita.

And in Brazil, where President Jair Bolsonaro, has followed a near-identical coronavirus script to President Donald Trump, Latin America’s largest country and economy has emerged as a new global coronavirus hotspot. Brazil has the most infections and deaths behind the USA, where infections have topped 2 million and deaths 116,00.

Back in Beijing, student Wu Hong, 25, said he was “not worried about the situation at all.” He said he’s had his fill of all his favorite foods recently, such as hotpot and milk tea.

“If I have to stay at home again for a period, I won’t have many regrets,” he said.