Top lawmakers in both parties, spurred to action by the death of a black Minnesota man in the custody of white police officers, said on Friday that they would hold hearings in the coming weeks on the use of excessive force by law enforcement and on racial violence.

Representative Jerrold Nadler, Democrat of New York and the chairman of the Judiciary Committee, said in an interview that he would convene a hearing in June to consider new federal actions that could help stem racial violence, especially acts of brutality by law enforcement against black and brown Americans. He also said his committee was looking at a federal chokehold ban and legislation to establish a commission to study the social status of black men and boys.

“What we are going to look at very specifically is where and under what circumstances the federal government can step in when local governments are engaging in or not stopping or controlling violence against racial minorities,” Mr. Nadler said.

In the Senate, Senator Lindsey Graham, Republican of South Carolina and the chairman of that chamber’s Judiciary Committee, said he would seek testimony on proposals to improve policing, combat “racial discrimination regarding the use of force” and improve relations between police departments and the communities they serve. He described the death of George Floyd, a Minnesota man who died after a white police officer knelt on his neck in an episode captured on video, as “horrific.”

Mr. Graham said both he and Senator Dianne Feinstein of California, the top Democrat on the panel, were “appalled at what we saw and believe it is important to have a hearing as soon as possible as to how to combat this outrage.”

“We intend to shine a bright light on the problems associated with Mr. Floyd’s death,” he said in a statement, “with the goal of finding a better way forward for our nation.”

The swift response on both sides of the Capitol reflected the interest by lawmakers in both parties to respond to a rash of killings of black Americans by white civilians and police officers this year, which have inspired protests across the country. But Democrats appeared to be moving more aggressively to advance specific legislative proposals aimed at forcing the Trump administration to mount a stronger response.

Senator Mitch McConnell, Republican of Kentucky and the majority leader, said Friday that the officers involved in the Minneapolis case “look pretty darn guilty,” and he called the death of Mr. Floyd “a hideous crime.” But he condemned violent protests across the country, and said that Americans should trust that the criminal justice system would hold those involved accountable. 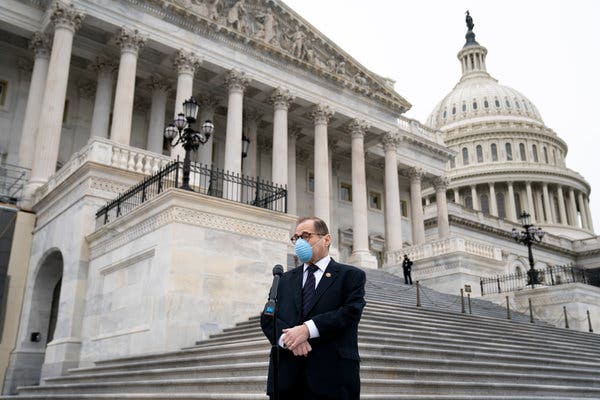 “In terms of maintaining social peace in this country, it is imperative that we move ahead quickly,” said Representative Jerrold Nadler, the chairman of the Judiciary Committee.Credit…Anna Moneymaker/The New York Times

Mr. Nadler’s comments came a day after he and the 23 other Democrats on the Judiciary Committee sent a letter to the Justice Department calling on officials there to open investigations related to the recent deaths of Mr. Floyd, Breonna Taylor in Kentucky and Ahmaud Arbery in Georgia.

“In terms of maintaining social peace in this country, it is imperative that we move ahead quickly,” Mr. Nadler said.

Many of the proposals being considered by Democrats have been discussed for years with little movement. Watching the growing national outcry in recent days, Speaker Nancy Pelosi said House Democrats would pursue “action so that this stops,” rather than just offering “expressions of concern.”

“We saw a murder take place before our very eyes,” she said on Thursday. “And so, the fact that the police officers were fired, that’s one thing, but there has to be some justice in all of this.”

In addition to drafting new legislation, Mr. Nadler said he was looking at a bill introduced by Representative Hakeem Jeffries of New York that would place a federal ban on the use of chokeholds or any pressure to the neck by the police.

Mr. Jeffries, who represents Brooklyn, initially introduced the legislation in 2015 after the death of Eric Garner by police chokehold, and it would have made the tactic used by the officer in Mr. Floyd’s case illegal. In videos of the episodes, Mr. Garner and Mr. Floyd could both be heard saying “I can’t breathe” in the moments before their deaths.

The committee is also likely to take up the bill establishing a commission that would be tasked with investigating racial disparities in education, criminal justice, health and employment and recommending policy changes. Sponsored by Representative Frederica Wilson, Democrat of Florida, the bill has also been put forward in the Senate by Senators Marco Rubio, Republican of Florida; Kamala Harris, Democrat of California; and Cory Booker, Democrat of New Jersey.

Representative Karen Bass, Democrat of California and the chairwoman of the Congressional Black Caucus, said in an interview on Friday that she was still looking to develop other proposals to address state laws that protect officers who use force when they say they feel threatened.

“This stuff is happening so fast,” she said, “we literally have not had a chance to have that conversation.”

Ms. Bass is among a group of prominent progressive lawmakers who are pressing for a vote on a separate, nonbinding resolution they introduced on Friday “condemning all acts of police brutality, racial profiling, and the use of excessive and militarized force throughout the country.” It calls on law enforcement agencies at the federal, state and local levels to commit to reforms.

“There can be no justice for George Floyd, Breonna Taylor, or any of the human beings who have been killed by law enforcement,” Representative Ayanna Pressley, Democrat of Massachusetts and a sponsor of the measure, wrote on Twitter. “For in a just world, they would still be alive. There must, however, be accountability.”