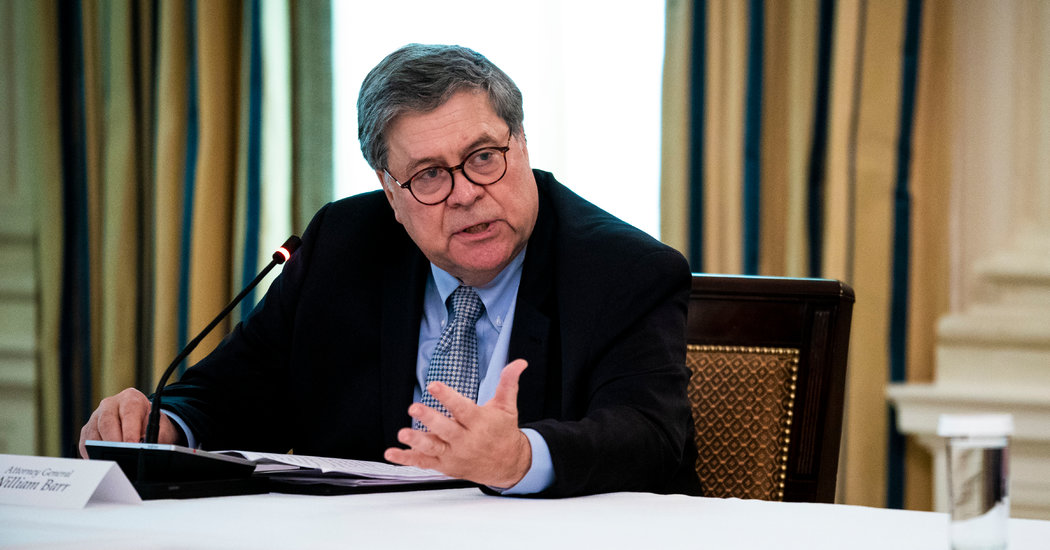 WASHINGTON — Attorney General William P. Barr contradicted President Trump on Monday and confirmed that the president was taken to an underground bunker late last month not for an “inspection” but because of security concerns over street demonstrations outside the White House.

“Things were so bad that the Secret Service recommended the president go down to the bunker,” Mr. Barr said in an interview with Fox News. “We can’t have that in our country.”

Mr. Barr’s account of the events of May 29 stood in direct contrast to the version that Mr. Trump offered last week when he denied a report in The New York Times that the Secret Service had taken him to the bunker for his security amid the protests. The president called that a “false report” and suggested that he had merely been looking the place over.

“I wasn’t down — I went down during the day, and I was there for a tiny little short period of time, and it was much more for an inspection,” Mr. Trump said last week. “There was no problem during the day.”

The trip to the bunker has become a major irritant to the president, who was infuriated at the notion that he would be seen as cowering in the face of protests even if the Secret Service was following protocols. Officials noted that a temporary barricade near the Treasury Department next door to the White House had been breached.

The day after the Times report was published, Mr. Trump insisted on marching out of the White House to stage a photo opportunity at St. John’s Church a block away, a bit of political performance art that required the forcible removal of peaceful demonstrators from near Lafayette Square by the police deploying pepper spray, smoke grenades and mounted officers. White House officials have said that Mr. Barr gave the order and that Mr. Trump had no knowledge of the security arrangements for his walk.

Since then, the president has been the target of mockery, with late-night comics ridiculing his trip to the underground refuge and protesters waving preprinted disparaging signs in front of the White House during a crowded demonstration on Saturday. His effort to brush off the trip as nothing more than an “inspection” only fueled his critics, who roasted him on Twitter and other social media.

Mr. Barr cited Mr. Trump’s move to the bunker as one of the reasons for pushing demonstrations farther from the White House. But he denied that he gave the order to move the protesters in order to clear the way for the president’s walk to St. John’s, calling that a “canard” and saying the photo op was not a factor in the plan to move the perimeter.

But Mr. Barr said that he did not disagree with Mr. Trump’s decision to go to the church, which he said he ought to be able to do. “The president of the United States should be able to walk one block from the White House out to the ‘Church of Presidents,’” the attorney general said.

Mr. Barr would not say whether it was a good idea for Mr. Trump to have a photograph taken in front of the church holding up a Bible brought by his daughter in her $1,540 MaxMara bag with a group of all white officials in the middle of protests about systemic racism. “That was a decision for the White House and the president,” Mr. Barr said. “I don’t sit as a critic of these kinds of leadership decisions made at the White House.”

Mr. Trump’s relatively last-minute plan to walk through a public park to the church, which had suffered minor damage from a fire in its basement during a protest the night before, prompted officers to use violent means to clear the space and the church patio of protesters and clergy members — a decision that has been widely condemned.

The bunker beneath the White House was built during World War II in case of an unlikely enemy air raid, but it has been used only occasionally over the years. Vice President Dick Cheney was taken to the bunker on Sept. 11, 2001, when the authorities feared that one of the planes hijacked by Al Qaeda was heading toward the White House. President George W. Bush, who was out of town until that evening, was rushed there later that night after a false alarm of another plane threat.