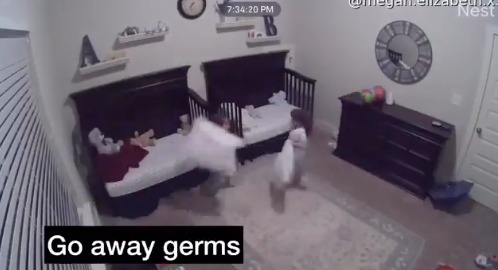 Hello one and all and welcome to another edition of Laura’s Links, sadly once again heavy on the reporting about the Murderous Barbarian Chinese Communist Wuhan Coronavirus. As for me and my house, we have been doing alright under the circumstances. The main mantra in our abode is to be grateful that everyone we love is well and focus on that because everything else is secondary. It is still very upsetting not to be able to be in physical proximity to a certain number of loved ones due to geographical distance, immunity status and age, because I’m a big hugger. Paradoxically, keeping a distance from some of the people we care most about is an expression of love. Not an easy time. Look what the evil Chinese regime has wrought.

I’ve been working remotely, cooking, cleaning and homeschooling. But being housebound does give one time for thought. And I’m thinking that many things can be true at the same time. The Wuhan virus can be very dangerous for certain humans, and others not. It is also true that Western economies cannot survive complete shut downs and that some of this shut-down may be decadent and overblown. It is also true that political and ideological lines are being drawn. Understand that the political left never rests. The political left will never agree to a ceasefire because they are serious only about power, and having power over your life, but not about your life. Alinsky said never let a good crisis go to waste. So look very carefully at who and what the left is rooting for.

We in the West are at war. Nobody really wants to talk about it and nobody wants to be at war or fight a war, or lose their life in a war, but we are at war with several evil regimes simultaneously whether we like it or now. The dangers to our planet are ideological and physical and they are centred in China, Iran and Russia. As I started to think more about this, I saw this from Shadi Hamid and would urge you to consider what we are saying and the lines that are being drawn.

Over the week, the indefatigable Prophet Mark Steyn tried to buoy our spirits with a live Q&A full of truth – but not downers – and some other assorted coronabits here and there.

Mark said en passant in the Q&A that one of the simple pleasures of life that he never thought he would miss because of Wuhan flu was the Eurovision song competition. I myself have never considered Eurovision a pleasure (whatever floats your boat, dude), but I do get his drift. Mark, chin up! I’m sending you a video of Israel’s rep, an extremely talented Ethiopian Israeli hottie: Eden Alene. You’re welcome! Sending virtual hugs your way. Now let’s take a look back to the week that was.

Forty states report fewer than five deaths. Is the big wave set to come? Or not?

Is the risk of a recession, another Great Depression, worth the lockdowns? President Trump is clearly considering this very point right now.

A smidgen of good news in Canada. Finally.

Silver lining? Is the spread slowing?

We are in this mess because of decisions made by the Chinese communists.

The Holocaust didn’t kill them. The Chinese communists did.

And was the “Spanish flu” even Spanish? Apparently not.

The situation is Europe is very dire.

Why are there so many deaths in Italy?

Chinese propaganda offensive chugs along. Why should we ever trust the Chinese with anything?

Evidence over hysteria (long but read the whole thing).

Interesting, Pope Francis calls upon Catholics to keep the Sabbath.

Accepting the Yoke of Heaven in Israel.

Katie Hopkins on the jihad against the Jews in France.

Getting closer to G-d through sacrifice.

Remember the little Syrian boy who drowned fleeing Syria, and the photo that set off the tsunami of migrants making Europe great again (NOT)? An update.

Kindness among the human wreckage.

Friendly whale not into the whole “social distancing” thing.

Creative humans innovate in times of crisis, in a time of choiceless choices.

Safe safe and well, one and all.

If you’re a member of Mark Steyn Club, do chime in in the comments to let Laura know what they think of these stories, or any others from the past week. (Laura’s Links is also our weekly open thread, so we’ll look the other way on the “no going off topic” rule). If you’re not yet a Mark Steyn Club member and want to get in on the fun, get yourself or a loved one a membership here. For in-person revelry and review with your fellow Mark Steyn Club members, get in on the upcoming Mark Steyn Cruise by booking yourself a stateroom for our Mediterranean voyage alongside Douglas Murray, Conrad Black, Michele Bachmann and Mark Steyn himself.

Of Princes and Priuses

It’s Surprisingly Easy Out Here for a Pimp

News DSMW - September 26, 2020
0
The Post’s Drew Loftis evaluates all the relevant fantasy football news ahead of Week 3 of the 2020 NFL season. Big Weeks Mitchell Trubisky QB, Bears, at Falcons (FanDuel $7,500/DraftKings $5,700) Don’t laugh. Well, OK, laugh, but laugh at the Falcons’ defense, not Trubisky. In two games, Atlanta has given up...

Families of 9/11 first responders, survivors who died after contracting coronavirus gain ‘insurance’ from...

News DSMW - September 26, 2020
0
Just this month, the 9/11 Victims’ Compensation Fund announced that if a first responder’s or survivor’s death certificate lists COVID-19, plus cancer or a certified respiratory illness, the fund would accept wrongful death claims and consider it a 9/11-related illness. ...

Families of 9/11 first responders, survivors who died after contracting coronavirus...