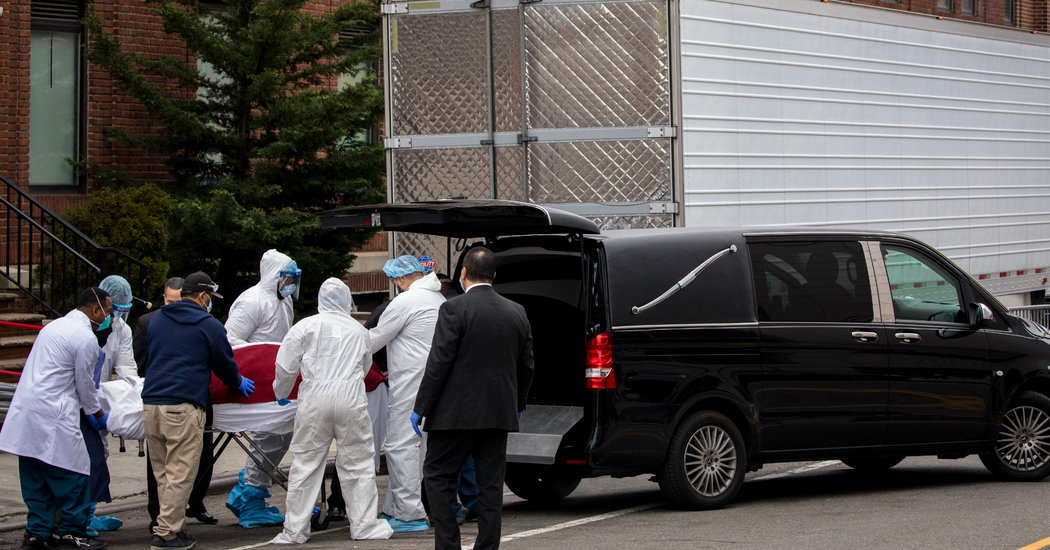 WASHINGTON — The top government scientists battling the coronavirus estimated on Tuesday that the deadly pathogen could kill 100,000 to 240,000 Americans as it ravages the country despite social distancing measures that have closed schools, banned large gatherings, limited travel and forced people to stay in their homes.

Dr. Anthony S. Fauci, the nation’s leading infectious disease expert, and Dr. Deborah L. Birx, who is coordinating the coronavirus response, displayed that grim projection at a White House briefing, calling it “our real number” but pledging to do everything possible to reduce it.

As dire as those predictions are, Dr. Fauci and Dr. Birx said the number of deaths could be much higher if Americans did not follow the strict guidelines vital to keeping the virus from spreading. The White House models they displayed showed that more than 2.2 million people could have died in the United States if nothing were done.

Those conclusions were based on a continuing analysis of cases in the United States and generally matched those from similar models created by public health researchers around the globe. The two public health officials urged people to take the restrictions seriously, and a subdued President Trump, appearing with them, echoed that message, saying that now is not the time to relax.

“I want every American to be prepared for the hard days that lie ahead,” said Mr. Trump, who answered questions for more than two hours and predicted that there would be “light at the end of the tunnel,” but warned that “we’re going to go through a very tough two weeks.”

Dr. Fauci and Dr. Birx showed charts indicating that coronavirus cases in New York and New Jersey had risen far higher than in other parts of the country, a fact that they said gave them hope that the overall number of deaths might be lower if people in the rest of the states followed the guidelines for at least the next month.

Mr. Trump displayed none of the carefree dismissiveness that characterized his reaction to the virus in February and early March, when he repeatedly said that “we have it totally under control” and that “it’s going to be just fine.” For most of the briefing on Tuesday, the president appeared to understand the severity of the potentially grave threat to the country.

But asked about whether the impeachment effort had distracted him in the early days of the pandemic, Mr. Trump reverted to form, lashing out at Democrats and once again calling it “a phony impeachment” and “a hoax.” He acknowledged that he might have been distracted, but insisted that he still deserved an “A+” for his effort to combat the virus.

But outbreaks in New Orleans, Detroit and other cities are growing quickly, and experts say it is unclear whether social distancing measures can stop them from rising even more in the next few weeks. Recent estimates in Florida suggest that it may be entering a phase of exponential growth.

Dr. Fauci, the director of the National Institute of Allergy and Infectious Diseases, stressed that even with those efforts, it was possible that nearly a quarter-million people in the United States could lose their lives.

“As sobering a number as that is, we should be prepared for it,” he said.

The president, who on Sunday extended for 30 days the government’s recommendations for slowing the spread of the virus, made it clear that the data compiled by Dr. Fauci and Dr. Birx convinced him that the death toll would be even higher if the restrictions on work, school, travel and social life were not taken seriously by all Americans.

Mr. Trump said the virus was a “great national trial unlike any we have ever faced before,” and said it would require the “full absolute measure of our collective strength, love and devotion” in order to minimize the number of people infected.

As of Tuesday, more than 183,500 cases of the virus have been reported in the United States, with more than 3,700 deaths — more than 1,500 of which are in New York, the center of the nation’s outbreak.

Gov. Andrew M. Cuomo, Democrat of New York, told residents of the state that things would continue to get worse — the peak was not expected there for another one to three weeks.

The projection released at the White House was the first time that Mr. Trump’s administration had officially estimated the breadth of the threat to human life from the disease caused by the coronavirus, Covid-19. In the past several weeks, Dr. Birx and Dr. Fauci have resisted predicting how many people might die in the pandemic, saying that there was not enough reliable data.

That is no longer the case, they said.

Public health scientists spent the past week constructing a model that could predict how widely the virus would spread in the coming months and how many people who get infected would succumb to the disease. Dr. Birx said the result was clear: The only way to minimize deaths is to continue the difficult restrictions on American life.

“There’s no magic bullet. There’s no magic vaccine or therapy. It’s just behaviors,” Dr. Birx said. “Each of our behaviors, translating into something that changes the course of this viral pandemic over the next 30 days.”

The new government estimates came to the same conclusion that other researchers have: that even with the isolation efforts already underway to limit the spread of the coronavirus, infections are almost certain to soar, straining the ability of hospitals to care for infected patients and leading to a growing number of deaths.

One of those models, created by scientists at the University of Washington’s Institute for Health Metrics and Evaluation, predicts that deaths from the virus in the United States will rise rapidly during April, reaching a total of about 84,000 by the beginning of August.

The model uses the severe lockdown in Wuhan, China, to calibrate how the outbreak might play out in the United States. That approach has some critics because control measures imposed in the United States have generally been less stringent than those in Wuhan. “If we fail at those measures, we face outcomes far worse than any included in the range of possibilities predicted by their model,” said Carl T. Bergstrom, a professor of biology at the University of Washington.

A second study, released on March 17 by the epidemic modeling group at Imperial College London and written by 30 scientists on its coronavirus response team, predicted that if the United States had done nothing to prevent the spread of the virus, 2.2 million people could have died. If, however, the government tried to isolate people suspected of having the virus and people they were in contact with, the number of deaths could be cut in half, the researchers said.

They concluded that only a nationwide suppression effort — an expanded version of efforts now underway across parts of the country — might significantly reduce the death toll. But they warned that such efforts might have to be maintained for long periods to ensure that the threat is over.

Mr. Trump, who spent weeks playing down the threat of the virus — and who has retreated from saying that social distancing could be scaled back in mid-April — congratulated himself at the briefing for projections showing that public health measures may significantly limit the national death toll.

“What would have happened if we did nothing? Because there was a group that said, ‘Let’s just ride it out,’” the president said, without saying what group he was referring to. He noted the estimate that as many as 2.2 million people “would have died if we did nothing, if we just carried on with our life.”

Asked whether the projected death toll might be lower still had he called for social distancing measures weeks earlier than mid-March, almost two months after the first confirmed case of the coronavirus in the United States, Mr. Trump insisted that he had acted decisively, noting that he had limited air travel from China on Feb 2. and from Europe six weeks later.

Dr. Birx said it was impossible to know whether earlier action would have made a substantial difference until widespread antibody testing revealed how many Americans had already been infected without realizing it.

“If there was no virus in the background” in late winter, Dr. Fauci added, “there was nothing to mitigate.” If the virus was already widespread at the time, he said, then the answer was “probably yes.”

Mr. Trump said that his weeks of largely dismissive commentary about the virus, until a recent abrupt change in tone, were meant to reassure Americans. “I want to be positive. I don’t want to be negative,” the president said. “I want to give people in this country hope.” He also insisted that what “nobody knew about this virus is how contagious it was,” even though health experts were alarmed by its virulence as early as January.

Near the end of a marathon briefing that lasted more than two hours, Mr. Trump said that the United States was “going through probably the worst thing the country’s ever seen,” adding that “we lose more here potentially than you lose in world wars as a country.”

Models of the spread of any infectious disease often give widely varying estimates of the ultimate death toll. Modelers use different assumptions on how the disease will spread and how much people change their behavior to stop new infections.