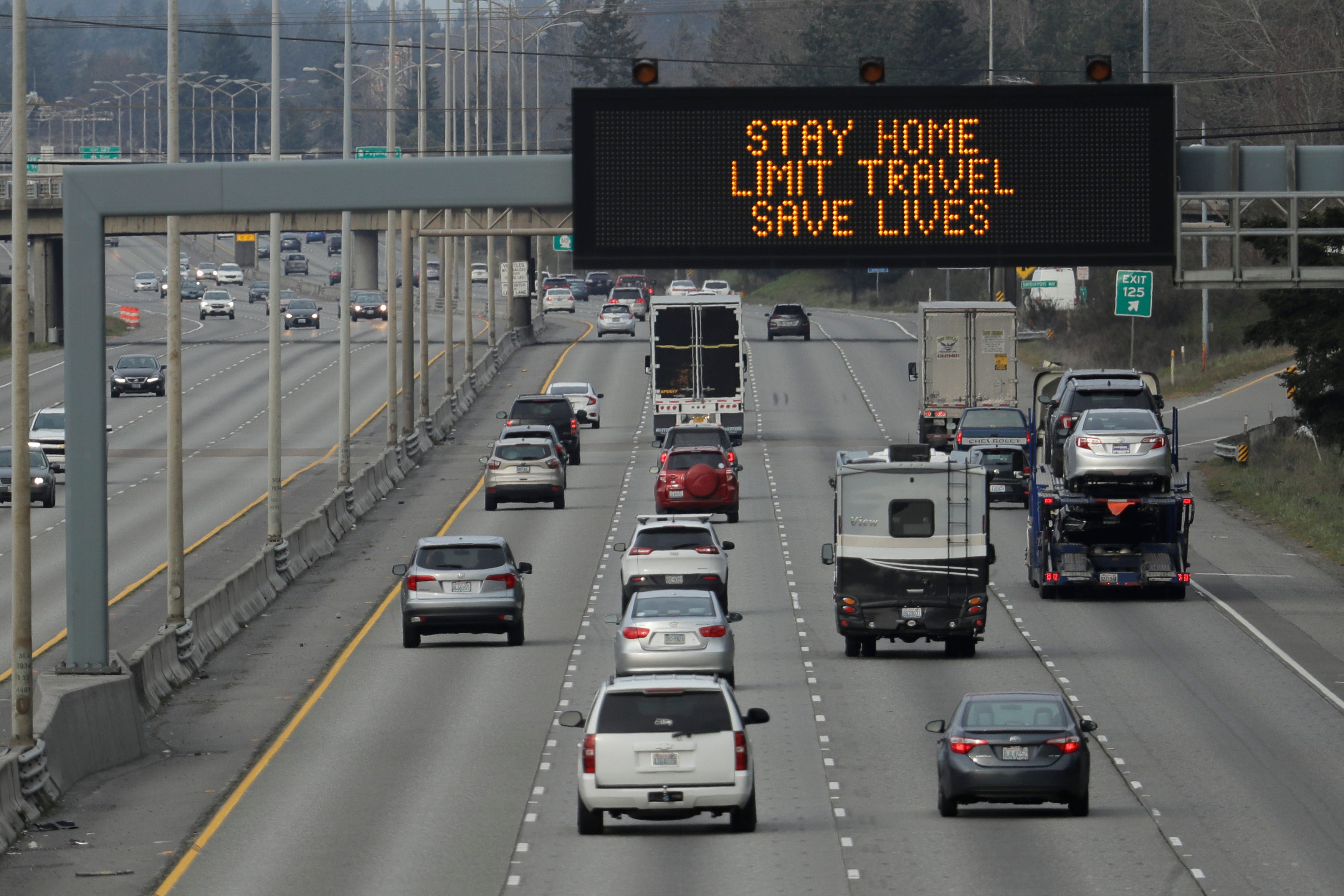 As President Donald Trump announced new federal aid Sunday for three states crippled by the coronavirus — New York, Washington and California — lawmakers in D.C. continued to squabble over a stimulus package aimed at saving an economy in free fall and the U.S. surpassed Spain in confirmed cases, now trailing only Italy and China.

Congress is reeling after being personally impacted by the virus, as Rand Paul, R-Ky., announced Sunday he had tested positive, becoming the first senator to do so. Additionally, two members of the U.S. House of Representatives tested positive last week, and multiple lawmakers have gone into self-quarantine after coming into contact with others confirmed to have the virus.

The stimulus package will attempt to counteract an economy teetering on the brink of collapse amid shutdowns, quarantines and millions of lost jobs. The GOP plan, estimated at $1.4 trillion, includes $1,2000 checks for most Americans, plus more money for businesses. In all, the stimulus could total $2 trillion.

But Democrats have issues with the Republicans’ proposal and, on Sunday, House Speaker Nancy Pelosi said there’s “no deal” and that Democrats would be “introducing our own bill.”

The U.S. now has more than 35,200 confirmed cases and 471 deaths across 34 states, the District of Columbia, Puerto Rico and Guam as of Sunday night. Globally, more than 14,700 people have died of the virus and 341,365 people have been confirmed to have it, according to the Johns Hopkins University data dashboard.

Our live blog on the coronavirus is being updated throughout the day. Refresh for the latest news. More headlines:

Stock market appears headed for another tumble on Monday

Stocks were poised to extend losses Monday after posting their worst week since the financial crisis, as congressional stimulus legislation to fight the coronavirus pandemic hit an impasse in Congress.

St. Louis Federal Reserve President James Bullard predicted the U.S. unemployment rate could skyrocket to 30% in the coming months, a level worse than the peak of the Great Depression in the 1930s.

President Donald Trump announced new actions to help Washington state, California and New York, saying FEMA would be funding “100% of the cost” to deploy the National Guard to those states to assist governors in combating the spread of the virus.

He also directed FEMA to supply:

Four large federal medical stations with 1,000 beds in New York, which has by far the largest number of COVID-19 cases in the country with more than 15,000.

Eight large federal medical stations with 2,000 beds in California, which along with New York is expected to get hospital ships from the Navy.

Trump also said those hard-hit states would received medical equipment and supplies,  such as respirators and protective equipment, that have been in high demand as the crisis escalates.

The president said he approved disaster declarations for New York and Washington and would soon do the same for California.

Canada refuses to send athletes to 2020 Olympics in Tokyo

The International Olympic Committee announced Sunday that it is considering the possibility of postponing the 2020 Tokyo Olympics and will make a final decision over the next four weeks.

The Canadian Olympic and Paralympic Committees decided they did not want to wait.

In a dramatic move Sunday night, Team Canada said it would not send Olympic or Paralympic athletes to the Games if they are held this summer, due to the ongoing coronavirus pandemic. The country’s Olympic and Paralympic Committees also urged the IOC and International Paralympic Committee to postpone their respective Games by one year.

While other national Olympic committees — including Brazil and Norway — have released statements calling on the IOC to postpone, Canada is the first nation to threaten not to send a delegation if the Games go on as scheduled.

Rep. Ben McAdams, D-Utah, one of two members of the House of Representatives to be diagnosed with the coronavirus, said in a statement late Sunday evening he had been admitted to the hospital after experiencing “severe shortness of breath.”

McAdams said he received oxygen “as I struggled to maintain my blood oxygen at appropriate levels” but now was feeling “relatively better” and was off oxygen.

The Utah Democrat said he expected to be released “as soon as the doctors determine it is appropriate.”

Two other members of Utah’s delegation of Congress, Sens. Mitt Romney and Mike Lee, said they would self-quarantine after coming into contact with Sen. Rand Paul, R-Ky., who announced a positive coronavirus diagnosis on Sunday.

Paul tested positive for COVID-19 but feels “fine” and is being quarantined, his office said. Paul is asymptomatic and was tested “out of an abundance of caution due” to his extensive travel and events,” his office said in a Twitter post. “He was not aware of any direct contact with any infected person.”

Paul, 57, had lung surgery in August to address an injury stemming from a physical confrontation with a neighbor in November 2017.

Last week, Reps. Mario Diaz-Balart, R-Fla., and Ben McAdams, D-Utah, announced they had tested positive for the virus. Dozens of other lawmakers who fear they may have been exposed have undergone self-quarantines.

New York state on Tuesday will begin testing drugs that could be used to combat the coronavirus, Gov. Andrew Cuomo said. The Food and Drug Administration has shipped 70,000 doses of hydroxychloroquine, 10,000 of Zithromax and 750,000 of chloroquine to the state, Cuomo said. President Donald Trump has expressed optimism that these drugs may help be a “game changer” in treating the virus. Cuomo credited the FDA for moving expeditiously to provide the drugs.

Cuomo said up to 80% of state residents could become infected with the virus, though the vast majority would have mild symptoms.

“The president ordered the FDA to move and the FDA moved,” Cuomo said. “We are all optimistic that (the drugs) could work. I’ve spoken with a number of health officials and there is a good basis to believe that they could work.” Cuomo said the number of confirmed COVID-19 cases in New York had risen to 15,168, and the death toll in the state is 114, both highest in the nation.

FEMA Administrator Peter Gaynor told CNN that a mandate isn’t required because companies are willingly producing the equipment. He said requests are coming in from every state “looking for the exact same things … We are trying to make sure we focus our efforts on the hot spots that need it he  most. And then if you don’t it right away you will be a little further down the list, but we will get to you.”

Meanwhile, designer Christian Siriano and his staff have started sewing masks for New York healthcare workers, and other celebrities are pitching in to help all over the U.S.

Coronavirus updates in your inbox, every day:Sign up for USA TODAY’s newsletter.

The dramatic measures initially taken by the San Francisco Bay Area and then California to prevent further spread of the virus are starting to expand to more of the country.

Ohio, Louisiana and Delaware were among the states that instituted stay-at-home orders on Sunday, mandating their residents not to leave the house except for essential activities such as purchasing groceries and medicines, seeking medical treatment and exercising.

“That doesn’t mean gather elsewhere,” Garcetti said on Twitter. “This is serious. Stay home and save lives.”

Also, Oregon closed all its state parks through at least May 8.

24 TSA officers across US test positive

At least 24 Transportation Security Administration officers across the nation have tested positive for the coronavirus, including nine at airports in the New York City area.

The breakdown: five officers at JFK and four at Newark Liberty. In addition, the TSA said an employee at LaGuardia has tested positive.

Workers have tested positive at several airports, with new cases at Washington Dulles and Phoenix Sky Harbor. A TSA officer at the airport in St. Thomas, Virgin Islands, also tested positive, according to the agency.

The State Department has chartered two flights on Monday to begin evacuating hundreds of Americans who are stranded in Guatemala.

Guatemala suspended all air travel except for cargo flights on March 16 in an effort to slow the spread of coronavirus.

“We do not know when civilian flights will resume in Guatemala after these U.S. government-coordinated charter flights, but urge travelers to continue to check the availability of commercial flight options,” the State Department said.

On Friday, Secretary of State Mike Pompeo told reporters at the White House that the department had established a repatriation task force to help Americans trapped outside the country.

How many cases of coronavirus in US?