The number of people in Italy infected with the new coronavirus from China increased 45% in the last day and the number of deaths grew to 10, officials said Tuesday. Civil protection officials reported 322 confirmed cases of the virus, 100 more than a day earlier.

They said that some of the new cases showed up in parts of Italy well outside the country’s two hard-hit northern regions, including three in Sicily, two in Tuscany and one in Liguria.

As cases continued growing at a worrisome rate, evidence emerged that the virus was spreading from its epicenter in Europe to other countries with vacationing Italians and Europeans who visited the afflicted northern regions. 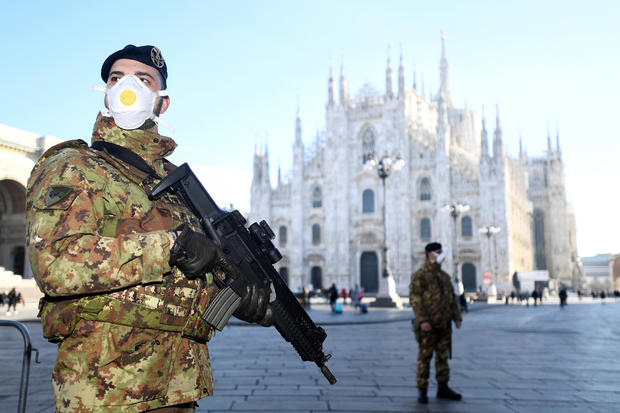 Meanwhile, South Korea was racing to contain the largest outbreak of the virus outside China, as the COVID-19 disease claimed more lives there. The nearly 1,000 cases and 10 confirmed deaths from the illness in South Korea pushed the global tally of patients over 80,000 and the death toll closer to 3,000.

Iran has also reported more deaths from the disease, amid fears the Islamic clerics who run the country could be under-reporting cases there.

With 53 cases confirmed in the U.S., the Trump administration has sought billions of dollars in additional funding from Congress to buy protective gear and work on treatments and a vaccine for the new virus. Democratic House Speaker Nancy Pelosi lambasted the White House funding plan as “long overdue and completely inadequate to the scale of this emergency.”

The World Health Organization has called it a global health emergency, but has thus far declined to use the label “pandemic,” a term used when a disease takes hold in multiple regions and spreads rampantly within communities. But the dramatic spread in South Korea, Iran and Italy has stoked fears that COVID-19 could reach pandemic status.

Those fears jarred stock markets around the world, prompted increased travel restrictions and sparked a race to test hundreds of thousands more people in South Korea for the disease.